At some point there is no antidote for credulity unhinged, and today we may have approached very close thereto.

As it happens, Richard Branson’s incipient space tourism company, Virgin Galactic Holdings (SPCE), which so far has no routes, revenues or operating business (and no prospects of said items for years to come), today gained 28% or $1.7 billion in market cap. So doing, it did give the idea of a PE multiple an altogether new definition.

Virgin Galactic has no “earnings”, of course, but make no never mind: The company posted an alternative E which came to $7.1 million during the last 12 months.

So with a market cap that closed at $7.6 billion today, it is trading at 1,073 times E. And on the Seasame Street that formerly was known as Wall Street, the Big Bird of Bubble Finance reminds us that today’s letter “E” stands for “expense“.

That’s right. The ticker symbol SPCE was trading at just under 1100X the rate of its cash burn!

Again, the “E” in question represented, among others, the cost of promoting and extracting advance deposits from rich guys wishing to beam themselves to Mars (someday).

Spoiler Alert: It was just a happy side effect of the Fed’s $400 billion liquidity flood designed to insure that nowhere—-and we mean in no nook or cranny of the multi-trillion money market—did any trade between consenting adults or insentient robo-machines occur at even a bip (1/100th) above the 1.55% policy rate it had decreed. 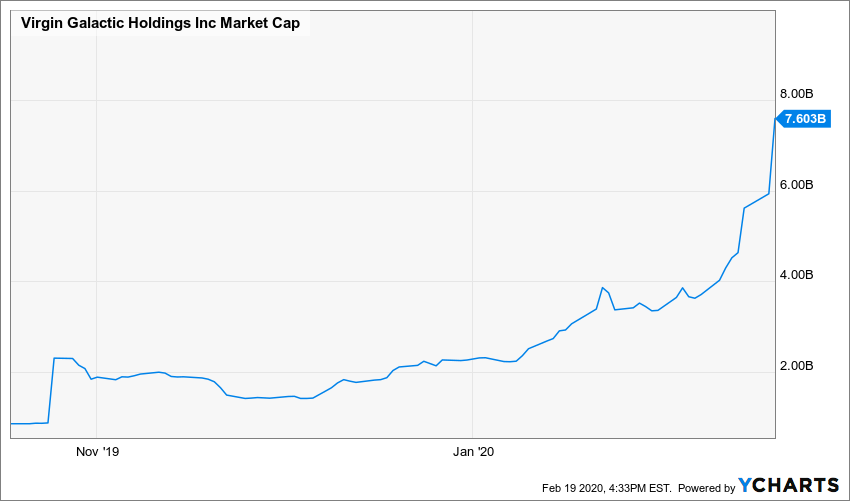 Stated differently, Wall Street is rife with irrational exuberance on steroids. Today was Wednesday—meaning the market was open and therefore TSLA gained 7% or $11 billion of what the charts say is “market cap”, but which might as well be bottled air.

After all, Tesla is now valued at $166.5 billion, which is nearly the combined value of Ford, GM, Fiat Chrysler and Volkswagen AG, but that loony number also represents a gain of $124 billion since October 3rd.

Needless to say, the only new information emerging since then is that the company’s 2019 sales were flat–save for the pull forward effect of expiring tax credits; and that its brand new plant and allegedly booming sales in China have been stopped cold by Covid-19.

Then again, what does China, sale volume, $968 million worth of 2019 cash burn or a $2 billion equity offering that Elon Musk dissed as totally unnecessary only weeks ago have to do with it?

The fact is, the Fed is printing like mad, as are the other central banks of the world, and that’s about the only thing “markets” discount today: Namely, the radiant heat of monetary printing presses running flat-out in central banks all around the planet. 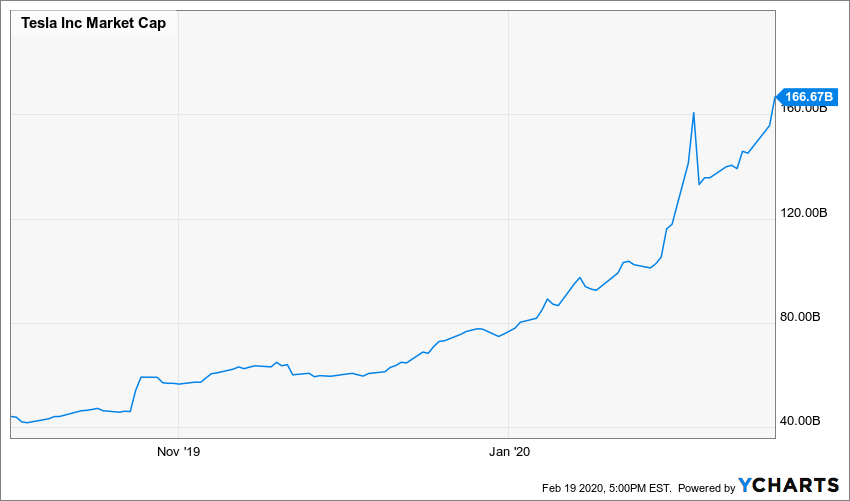 Then there is Beyond Meat Inc., which is still hanging in there with a $7.7 billion market cap or at 33X LTM sales of $231 million, and, of course, negative net income and deeply negative free cash flow. The latter posted at -$54million in the latest 12 months, and has totaled -$159 million over the last 3.75 years.

Still, it would be hard to call this even a hopium stock and not merely because every one of the food giants is piling into the meat substitute space or because only 0.3% of the population is vegan. Actually, even the hockey stick boys on the sell-side are apparently gasping for hope, projecting just $22 million of net income for 2020.

Maybe today’s giddiness in response to the “fact” that only 2,000 new coronavirus cases were announced last night got helped along by Janet Yellen.

She came out of her retirement home yesterday to opine that in the event of a disturbance (i.e. recession) to the Keynesian nirvana of full employment she believe the Fed has delivered, the Eccles Building might need some new tools—given there are no “rates” left to cut.

So by her lights, direct purchase of US stocks and corporate bonds might be a swell addition to the Fed’s tool kit.

But whatever the catalyst, today’s rally was simply another “look mom, no hands” exercise in “buying the dip”. Even yesterday’s opening $10 per share/$40 billion market cap plunge by Apple owing to its announcement of deep troubles in its factories in the Red Ponzi, got largely washed away today.

So notwithstanding that virtually all of Apples $267 billion of sales and $101 billion of gross profits are sourced from its dozens of factories and 1.3 million contractor employees in China, it ended the day at 98.7% of its all-time high from a few days back.

And speaking of that which counts in the stock market, here is the same chart for Apple since the Fed went on the repo-bashing warpath in late September. To wit, its  market cap is up a cool $430 billion or 43% since September 20.

Yet what has the world learned about Apple’s well understood and heavily followed and analyzed future business prospects in the last 150 days that could possibly warrant this massive gain? 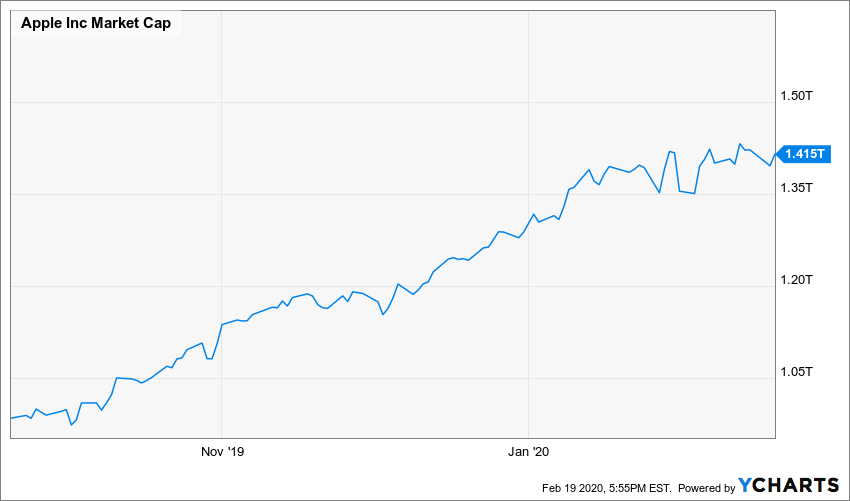 Certainly, it was not that Apple has broken loose of its middle age stasis and is now again soaring to new heights of sales and profits. In fact, during the LTM period ending in December 2019, sales were up by only 2.8% per annum from the level posted back in 2015.

Moreover, its $66.2 billion of LTM operating income was well below the $71.2 billion reported in 2015 and pre-tax income was also lower by 6.5%. The modest 7% gain on the net income line was entirely due to the Trumpite/GOP tax rate reduction.

In short, there is nothing that says off to the races in its financial performance.

By contrast, what we have had crystalized is that the Red Ponzi may be an economic and social powder keg and that Apple’s prospects are inexorably intertwined with what is truly a freak of economic history—whether this present Covid-19 trauma proves fatal or the next one in line materializes in due course. 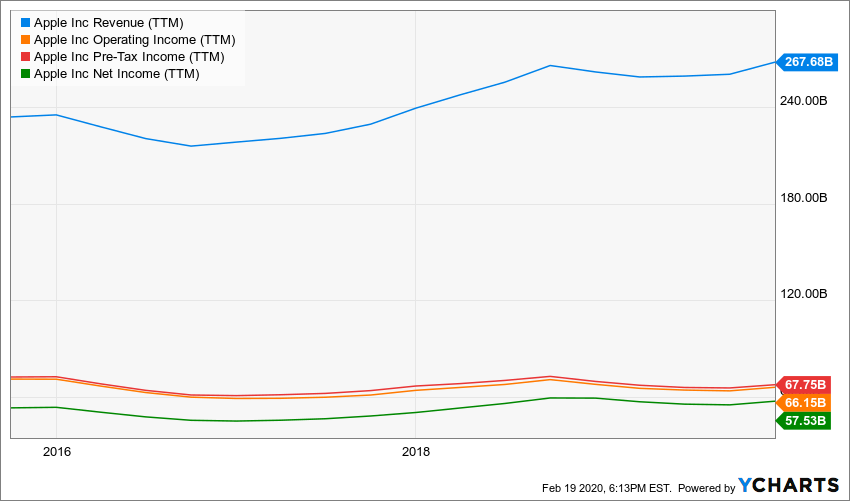 Still, in the midst of today’s crazy at least one fund manager had managed to retain his sanity.

“The bottom line is there is no respect for risk in the equity market and mania is not indefinitely sustainable, there is no permanently high plateau,” he writes in a note referencing Rodney Dangerfield, the comedian who famously couldn’t command respect.

That is to say, when you reach the point that $7.6 billion of market cap is conferred upon what is essentially a Richard Branson publicity stunt the end must be near.

In the case of Virgin Galactic mainly Wall Street gamblers drowning in unspeakable windfalls have taken 600 reservations and made $80 million in deposits for a 90 minute flights at some point in the indeterminate future, which flight will include several minutes of weightlessness among other thrills—all for the bargain price of $250,000 a ticket.

It might be argued, of course, that the present blow-off top has already happened twice in this century—in the spring of 2000 and the fall of 2007—-and that the unhinged gamblers will again get their due.

But it’s actually a lot more than that. The current egregious central bank fostered bubbles on Wall Street and its counterparts around the world are functioning as powerful magnets, redirecting and reallocating massive capital flows into speculative venues and projects that inflate the paper wealth of the 1%— even as they deplete the flow of capital into productive investments on main street.

In recent days, the French luxury goods conglomerate, LVMH, sold $10.3 billion of bonds to fund its $16.2 billion purchase of the Tiffany & Co (TIF). That was $6 billion or 60% more than its value at the end of 2015 and represented a hefty 30X LTM net income.

We use the term “hefty” because during the same period the net income of TIF had grown at just a 2.5% annual rate, reflecting the tremendous amount of competition in the luxury goods sector.

So LVMH essentially paid an absurd 12X Tiffany’s growth rate, thereby conferring something in the order of a $6 billion windfall on the traders and arbitrageurs who had accumulated the stock prior to the deal’s consumption (and in some cases prior to its announcement) last fall.

Why did the legendary Bernard Arnault pay such a massive premium to put another storied (and fading) luxury brand in his stable?

In a word, the ECB made it possible for him to fund 65% of the purchase price—and therefore all of the huge premium over its prior trading value—for essentially free.

That’s right. Some of the debt was sold at a negative yield and all of it well under 0.50%:

Bernard Arnault, the boss of LVMH Moet Hennessy Louis Vuitton SE, exceeded even his own incredibly low yield expectations in his company’s giant bond sale this week — which included the biggest corporate issue in euros since 2016. The luxury giant raised 7.5 billion euros ($8.3 billion) and 1.55 billion pounds ($2 billion), over a range of maturities from two to 11 years, to help finance its $16 billion purchase of Tiffany & Co.

Two of the five euro tranches were placed at negative yields, meaning investors are paying single A-rated LVMH to borrow money. Arnault’s expectations back in November for yields from the sale of “between 0% and 1%” have been surpassed. Even the 11-year tranche has a coupon of just 0.45%. M&A has never been cheaper.

France’s richest man can thank the European Central Bank for this state of affairs. The restart of its 189 billion-euro Corporate Sector Purchasing Program has driven credit spreads ever lower. While the central bank wants to lessen the funding costs of European companies — and local subsidiaries of global firms — to make it easier for them to invest, it may not have been meaning to help a French luxury behemoth snap up an American jewelry icon.

As one fixed income analyst explained with respect to LVMH’s money heist from the bond market:

It’s just a shame that most of these jumbo deals are being used to refinance existing operations more cheaply — rather than spurring an investment boom, or local European mergers and acquisitions that would help the continent’s moribund corporate environment.

No it isn’t a shame. It’s a crime and one which is destroying the very fabric of capitalism. Chris Whalen, as usual, cogently explained:

In the world of central banking and economics, the tyranny of the consensus has become unbearable. The world is currently held hostage by a group of unelected central bankers who have decided that they must save the world from deflation via hyperinflation and open market purchases of private stocks and bonds. Despite the accumulating evidence that these policies are not helpful and may in fact be damaging to the global economy, no dissent from the Fed’s monetary gospel is tolerated—even by Republicans, who in theory should know better.

The thing about rockets, of course, is that unless they break out of earthly gravity’s sway, they eventually come flaming back to earth.

Needless to say, central bankers have not now nor will they ever overcome the laws of financial gravity. Today just brought us that much closer to the flaming descent of the myriad of liquidity-fueled financial rockets the Fed’s foolish money-printers have induced Wall Street to launch.