If there was ever any doubt that the mainstream media dwells in fantasyland, NBC recently resolved the matter with this gem:

“President Biden’s approval rating has fallen to lowest level of his presidency despite a booming economy”. It’s talking head just couldn’t understand why people would be “unhappy with the way Biden is handling the economy” when wages are growing and they’ve added a “record 6.4 million jobs” in 2021.

Well, no. Wages measured in the manner experienced by actual main street families—that is, after inflation—are actually shrinking. Hard.

Average hourly earnings adjusted for inflation, in fact, have been falling for 11 straight months. Indeed, as of February 2022, real wages were actually 5% lower than they were in April 2020. And the prospect is for even more deterioration in the months ahead as inflation soars toward 10%, even as wages are rising in the 5-7% range. Likewise, not a single one of those ballyhooed 6.4 million jobs, were net new jobs; they were actually born-again jobs lost during the Lockdown-driven plunge in the spring of 2020.

Compared to the pre-Covid peak in February 2020, in fact, the BLS job count is still down by 1% and stands no higher than it posted in July 2019. Nearly 2 years with no net gain in the jobs count is not evidence of a “booming economy” by any definition of the term.

Nor is that the half of it. A “booming economy” is not signified by short-run deltas, such as monthly, quarterly or even annual rates of change. What measures economic strength is current levels compared to prior peaks in the business cycle. That is, the trend rate of improvement, not a blip rebound from a prior dip or plunge.

In that context, the present economy is not booming in the slightest. The index of aggregate labor hours in February was only 11.8% above its level way back in December 2007. That means that during the 15 years since the pre-crisis peak, labor hours employed in the US economy have grown by just 0.79% per annum; and during the last four years that figure has diminished further to just 0.64% per annum.

By contrast, the historical standard for 1964-2000 is a 2.00% annual growth rate. So since March 2018, therefore, the growth rate of total labor hours employed in the US economy has dropped to just 32% of this historic trend.

What you are measuring also matters. For example, since income is the payment for output, the growth of real personal income over time should be a decent proxy for economic growth. But actually it isn’t because the personal income number includes a huge and growing component for transfer payments.

But the latter does not represent value added or new output; it’s a transfer payment funded by tax extractions from current (i.e. already produced and paid) income or by Federal borrowings, which are a tax on future income. Consequently, the relevant variable is real personal income excluding transfer payments.

Again, that measure fails to show any evidence of a boom, and, in fact, is just another reminder that the performance of the US economy has deteriorated badly in recent years. Since February 2020, therefore, real personal income less transfer payments has grown by just 0.5% per annum.

In annual terms, the latter computes to a 1.73% growth rate. Again, that’s less than half the 3.60% per annum growth rate of real personal income less transfer payments recorded over 1964 to 2000. Moreover, the above trends are based on pure aggregates for the total US economy. But an equally important variable is the growth trend relative to the total population—since the later incorporates changes in the size of the work force and therefore potential output.

On a per capita basis, therefore, the deterioration in economic performance is even more pronounced. Relative to the 1960-2000 trend growth rate of of 2.39% per annum, per capita growth fell to 49% of that level between the November 2007 pre-crisis peak and February 2020, and then to just 14% during the past two years.

Another sturdy measure of economic performance is the industrial production index. There are several reasons why it is superior to GDP, including:

So what the industrial production index measures, therefore, is the goods, utilities, energy and mined materials that are at the heart of the value-adding production process.

As shown in the graph below, however, the US industrial economy is flat-lining, not booming. For all practical purposes, industrial growth measured on any kind of meaningful trend basis has disappeared entirely:

Per Annum Growth Rate of The Industrial Production Index:

Indeed, the chart below and the embedded growth CAGRs leave little to the imagination. The US industrial economy has essentially gone nowhere since the turn of the century. And that’s not withstanding the greatest money-pumping spree in recorded history, which enlarged the Fed’s balance sheet from $500 billion to $9.0 trillion or by 18X. Alas, these data track the severe deterioration of macroeconomic performance during this century to date, which deterioration occurred during a 22 year period when the Fed’s balance sheet was relentlessly expanding—-growing by $8.5 trillion or an average of $32 billion per month.

But now the resulting inflationary impact on goods and services has hit the ground running—with such force that even the Fed heads belatedly recognize they are hopelessly behind the curve. So this week they released meeting minutes that left no doubt that the Fed’s printing press is going to be thrown sharply into reverse.

Beginning with the May meeting, in fact, it plans to shrink its elephantine balance sheet at $95 billion per month, even as Sleepy Joe and the Congressional duopoly run budget deficits at $1.5 trillion per annum or higher.

Yet since the law of supply and demand has not yet been repealed, the implication is crystal clear: Longer-term interest rates are heading higher—and substantially so.

What that means, of course, is that the non-boom of the present is fixing to become a bust not too far down the road. One recent real time indicator of the on-coming recession has been the drastic speed at which mortgage rates have soared.

This week the Mortgage Bankers Association said that  the average contract rate on a 30-year fixed mortgage rose 10 basis points to 4.9%, and is up 1.07 percentage points in the last eight weeks. That’s the swiftest rise since 2003. The effective rate, which includes the effects of compounding, rose to 5.06%.

Likewise, the Fed controlled short-term rate is heading higher, and a lot faster than expected, as well. Notwithstanding its indication that the May rate increase will be 50 basis points, the fact remains that the Fed is in uncharted waters in terms of being behind the inflationary curve.

The Y/Y CPI inflation rate is already 8% and about to hit double digits. The last time inflation was here, the Fed’s overnight rate was over 12%. 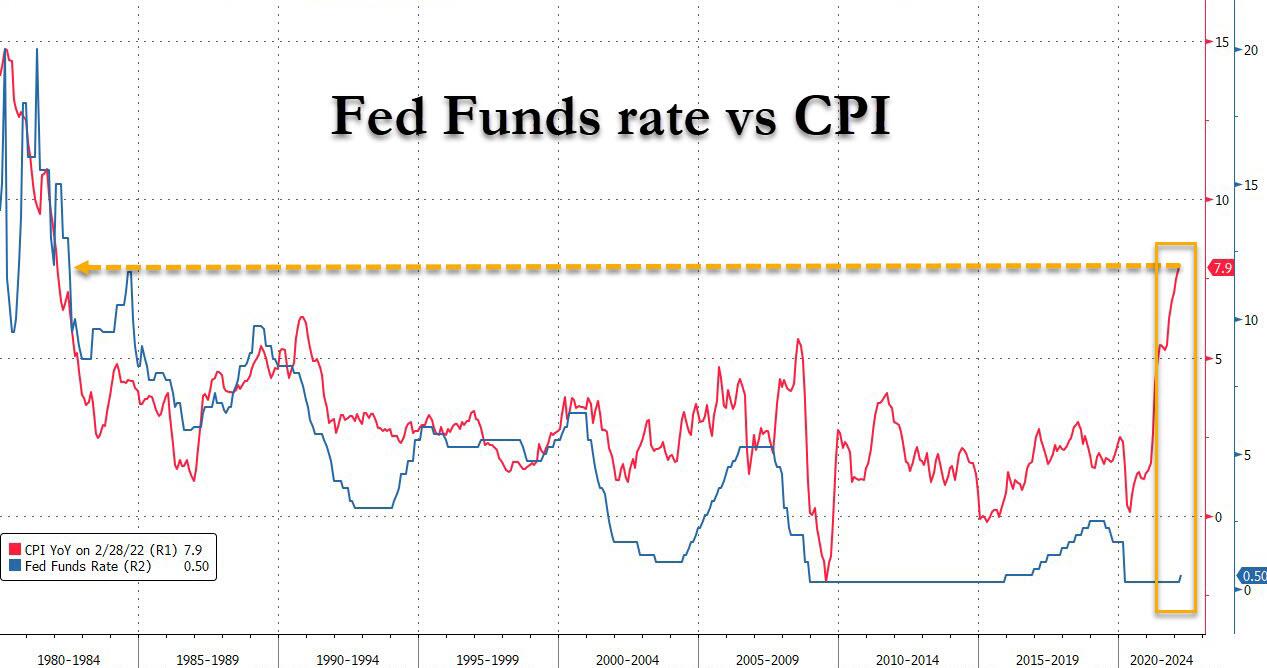 In short, the only “boom” on the horizon is the impending implosion of Wall Street’s buy-the-dippers and Washington’s vast legion of borrow-and-spend operators.