It should be damn obvious by now that the Fed’s massive monetary inflation of the last several decades has manifest itself primarily in asset prices. And that’s a very sharp change from the initial period of fiat money after August 1971 when goods and services inflation predominated.

For want of doubt, here is the smoking gun. During the first quarter century of fiat between 1971 and the mid-1990s, nominal GDP grew by 8.0% per year, while the total market cap of the US stock market as measured by the Wilshire 5000 increased by 8.4% per annum.

Consequently, the ratio of stock market assets to national income (nominal GDP) remained roughly constant, drifting upward from 80% of GDP in 1971 to 87% by 1996. Obviously, there was a whole lot of inflation generated by the Fed during that initial quarter century period. But that ended up in both nominal GDP and the current market value of stocks—so the ratio of assets to income remained close to historic trends.

By contrast, Alan Greenspan famously gave his “irrational exuberance” warning in December 1996 and then promptly forgot about it. Now we know why. Thereafter, the total market cap of US equities soared to $45.5 trillion, leaving GDP far behind.

In fact, the staggering $38.3 gain in stock values during the last 25 years was well more than double the $14.5 trillion rise of nominal GDP, meaning that the stock market is now capitalized at 200% of national income. Moreover, a good share of that happened during the last 16 months when the US economy was allegedly so battered by the Covid-Lockdowns that upwards of $6 trillion of bailouts and stimmies were thrown at the economy by Washington to ensure that it didn’t suffer a depressionary collapse.

That’s right. Since December 2019, the stock market has gained $12.5 trillion of market cap compared to only $1.0 trillion of GDP. This utterly insensible gain in total market cap, in fact, is more than the total value of all US publicly traded equities as of June 1999.

It also pales into relative insignificance the blow-off tops of the dotcom bubble in 2000 and the housing credit bubble in 2007. After Greenspan’s irrational exuberance speech 25 years ago, the stock market erupted as follows:

In summary, the value of the stock market rose by 6.3X during the last quarter-century of money-printing madness, while national income increased by only 2.7X. There is no explanation for that yawning gap other than rampant monetary inflation because the alternative doesn’t remotely compute.

That is to say, the market can’t be capitalizing improved future growth prospects for the US economy because self-evidently the very opposite is the case. The trend rate of real GDP growth has already deteriorated dramatically, underscored by the fact that it has plunged to just 1.5% since Q4 2007 or barely one third of the rate which had prevailed in the decades before Greenspan espied irrational exuberance rumbling down in the canyons of Wall Street.

More importantly, during that interim 25 years these same Fed money pumping policies led to the off-shoring to China of a huge chunk of America’s industrial economy, accompanied by an eruption of debt and leverage of nearly biblical proportion.

In fact, even as Greenspan was jawing about maybe, possibly a little too much speculation, total public and private debt stood at $21 trillion and amounted to 250% of GDP, which was already way above the pre-1971 average of about 150%.

But then it was off to the races. Today total US debt—household, business, government and financial—stands at a towering $84.5 trillion and a growth-crushing 385% of GDP. So the very idea that the stock market’s capitalization should be breaking away from its moorings in the national income is just plain nuts. 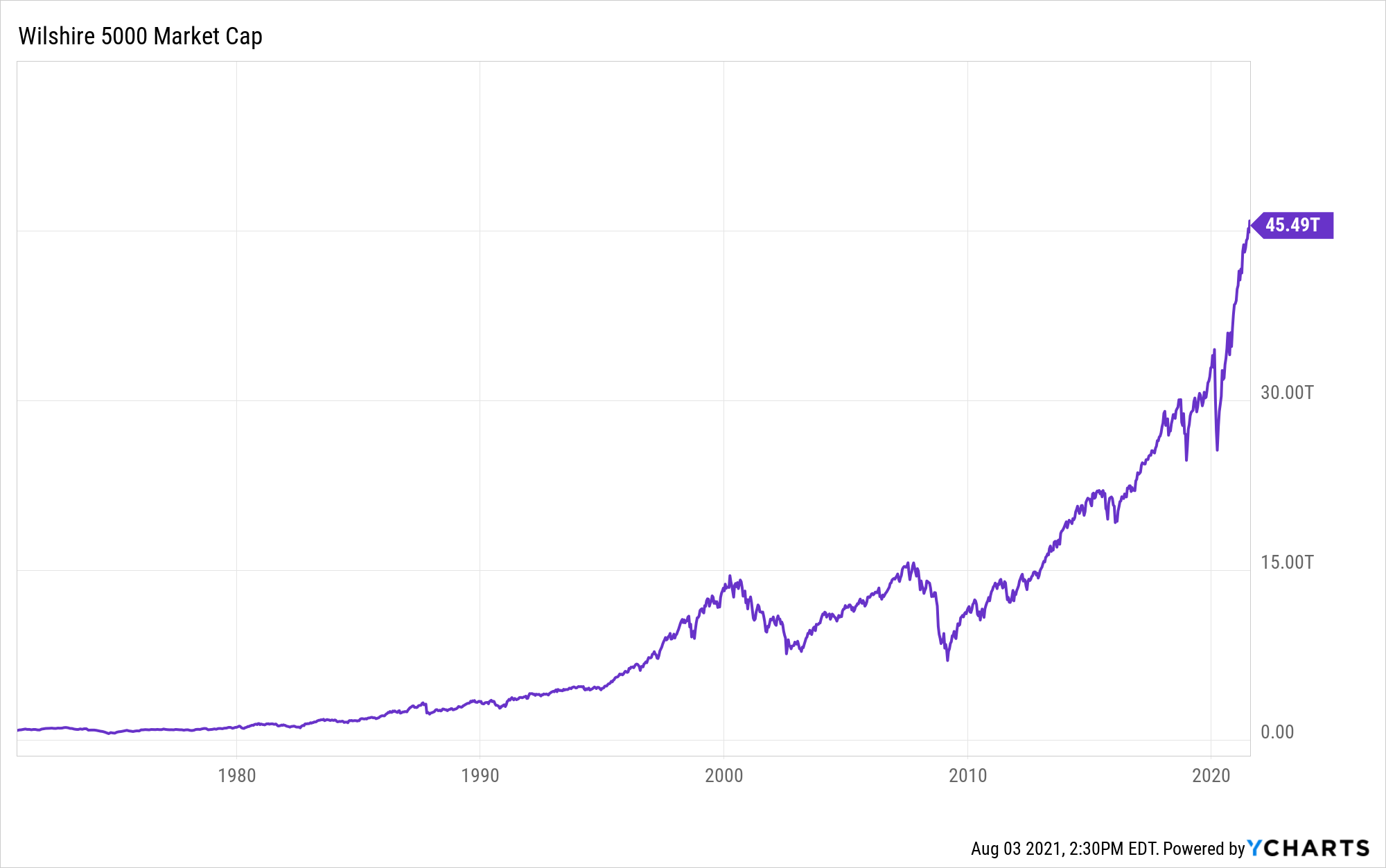 Needless to say, the inflation and bubble deniers domiciled in the Eccles Building have never ever looked at the chart above. The only tattered rationalization for this explosion of market value is the current ultra-low  interest rates, and presumably even central bankers understand that today’s 1.2% nominal yield and -3.0% real yield is a temporary fluke, not a permanent or sustainable benchmark for valuing anything.

To the contrary, the heart of the bubble eruption shown above lies in three words: massive multiple inflation. That’s the same thing as accumulated bottled air of such enormous magnitude that Wall Street is literally floating on a combustible cushion of toxic financial ethers. One match and you have the Beirut grain silo inferno in the news a while back writ large—from one end of the canyons of Wall Street to the other.

You can readily illustrate that with the Tesla poster boy example, wherein its free cash flow multiple has soared from an already frisky 29X as of the June 2019 LTM to an out-of-this-world 275X for the LTM period ending in June 2021.

That’s right. During the past  two year’s Tesla’s market cap has exploded by 1300%– from $50 billion to $703 billion— even as its LTM free cash flow has barely doubled to $2.6 billion. And we cite its cash flow rather than net income multiple because it doesn’t really have any of the latter. Every dime of the meager net income it has reported during the past decade is attributable to regulatory credits—–the greenmail GM, Ford, Chrysler, Toyota and the rest are forced to purchase from Tesla in the form of carbon credits for the privilege of selling to the American public the internal combustion engine vehicles the actually want. 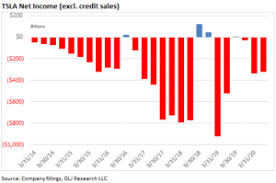 And, no, Tesla is not some one of a kind cult stock that has no implications for the rest of the market. In fact, today’s massive multiple inflation has been universal, including among the Big Cap growth stocks that Wall Street pretends are solidly valued and have nowhere to go except up owing to their immense profitability.

Needless to say, the level of profits and the valuation multiple applied to them are totally different things. Back in June 2015, for example, Apple was valued at $715 billion on the strength of its unparalleled tech product franchise, which was reflected in $224 billion of annual sales and $50.7 billion of LTM profits.

Still, there was a reason for the modest implied PE multiple of 14.1X: Namely, the tech behemoth’s growth rate was rapidly slowing—freighted down by the inherent limits embedded in its enormous scale and the then modest expectations for earnings expansion in the immediate years ahead.

Those modest expectations were accurate. Six years later, the LTM figures for June 2021 came in at $347 billion of sales and $86.8 billion of net income.

Yes, the latter figure represents a lot of profits, but it embodies only a very modest measure of growth. In fact, Apple’s six-year sales growth rate was only 4.0% per year, while its net income growth rate clocked in at just 6.8% per annum.

By all standards of historical corporate finance and equity valuation, therefore, Apple’s June 2015 market cap at $715 billion and PE multiple of 14.1X were about right, given the modest progression of its sales and earnings since then.

But in a casino-like stock market high on liquidity, dirt-cheap carry trades, the Powell Put and 13 million new Robin Hood mullets, historical standards have essentially been shoved down the memory hole. Today, Apple’s market cap weighed in at $2.436 trillion, meaning that its six-year gain totaled a whopping $1.72 trillion and that its current PE multiple on reported GAAP earnings doubled to 28.0X.

Stated differently, during the past six years the company’s market cap has grown at nearly 22.8% per annum, while earnings have risen by only 6.8% per year. The difference, of course, is accounted for by fevered multiple inflation.

What that means is this: The preponderant share (72%) of its massive $1.7 trillion market cap gain during the past five years was fostered in the Eccles Building, not its Cupertino, California headquarters.

Needless to say, Apple is the heart of the stock market and accounts for nearly 7% of the total value of the S&P 500 ($37.1 trillion). Accordingly, it’s the $2.4 trillion monster which drives the indices, the ETFs and the indexed mutual funds ever higher, and has sucked-in the fast money hedge funds and the Robin Hood naifs alike to the single most crowded trade in modern history.

But why in the world would you value a low-growth behemoth at 28.0X earnings, when those very earnings are are owing to its legendary 38-40% gross margins, which are brewed in more than a dozen giant Foxconn factories located in the Red Ponzi?

Obviously, if provoked sufficiently, the Red Suzerains of Beijing could vaporize those fat gross margins coming out of the Foxconn factories and be not much worse for the wear. After all, the Foxconn wage bill for its Apple contracts amounts to less than 0.2% of China’s GDP, while Apple branded products have less than a 8% market share in China, and one that is steadily falling owing to the intensifying commercial, political and even military cold war with Washington.

It is further crucial to note that a substantial part of Apple’s huge PE multiple inflation was the product of Fed-fueled financial engineering on a vast scale.

To wit, since September 2015 Apple’s prodigious profits machine has generated $507 billion of operating cash flow before R&D and CapEx. The latter two investment channels absorbed $84 billion and $76 billion, respectively, over the past six years.

But here’s the thing. Apple spent $339 billion, or nearly the entire amount, on stock buybacks during the period, and another $77 billion on dividends. In all, it pumped $416 billion back into the stock market or 120% of its free cash flow.

Needless to say, the $69 billion shortfall was borrowed: The company’s total debt rose from $63 billion to $124 billion during the period, which surely gives the idea of taking coals to Newcastle a wholly new meaning.

More exactly, when the most profitable company in human history cycles all of its free cash flow plus $61 billion of borrowings into the Wall Street casino in order to fuel speculative mania in its stock, then something “ain’t on the level”, as actor Gary Cooper once described communism to the US House’s red-hunting committee.