The indefatigable Sven Heinrich said it as well as possible this AM:

I’ve been saying for a while central banks are fueling an asset bubble and as global market distortions keep expanding week after week there’s no reason to back to walk away from that assertion but rather to stand up and scream the message from the rooftops…..

The bolded part is the meat of the matter. We are now in the blow-off top stages of a financial bubble that has truly reached insane proportions, and, worse still, has turned the entirety of Wall Street and millions of homegamers into drooling momo chasers virtually incapable of rational thought.

That is to say, like the proverbial frog in water being slowly brought to a boil, they have completely lost track of the baseline (safe) temperature. But here’s a wake-up call prompted by today’s Jobs Friday report.

And, no, we are not talking about the reported 140,000 jobs lost during December. That number isn’t worth the paper it was printed on for all the usual reasons, but especially this yucker: Notwithstanding the headline jobs loss, retail sector employment allegedly increased by +120,000.

Of course, that’s the seasonally maladjusted guesstimate of the change in December. But here’s something more bracing: The raw number (not SA) from the survey for December was 15.731 million retail jobs, which purportedly represented a holiday employment gain of +547,000 from the 15.184 million level reported for October 2020.

Then again, the October-to-December gains during 2017 through 2019 were +486,000, +488,000 and +512,000, respectively. So do we think that the two month gain during 2020 –the year of the Covid/Lockdown disaster that turned retail into a wasteland—significantly exceeded the gain during the three previous years of the purported “booming” Trump Economy?

In fact, we think the current period month-to-month numbers are about as close to statistical noise as the Federal government publishes, and the BLS has plenty of competition in that particular sporting event.

As we have frequently noted, the BLS numbers for the current month are basically modeled, not counted. They are therefore riddled with guesstimates, imputations and trend-based extrapolations—factors which get slowly washed out of the data over five years as the BLS steadily replaces its initial guesses and model projections with real world data obtained from tens of millions of employers who file tax records with state authorities and the IRS.

Alas, employers are now and always have been resolute in their determination to pay taxes only on actual hours worked and paychecks issued, not on the phantom employees implicit in the BLS’ seasonally adjusted model projections. And that’s also why when you get out to 5, 10, 20 and 50 year time intervals, the Jobs Friday report is a gold-mine for looking at the fundamentals of the US economy, of which this morning’s report screamed out for especial attention.

To wit, even as the stock market reached truly stupid levels of speculative mania, the single most important metric in the entire BLS report—-the index of aggregate hours worked for the entire private sector of the US economy—told you all you need to know with respect to the hideous disconnect between the main street economy and the speculation-driven Wall Street stock averages.

And these number are about as honest injun as you can get because they start at the peak of the last cycle, meaning that the NASDAQ index was already at pretty frisky level on October 2007. But after the alleged trauma of the September 2008 meltdown, this stock index was off to the races and never looked back as the Fed flooded $6.5 trillion of fake money into the system—-part of a worldwide central bank liquidity flood that totaled nearly $24 trillion over the same 13-year period.

Yes, there is a tad of apples and oranges in this comparison, but even when you adjust for inflation (black line), the  NASDAQ 100 index was up by 375% and even when you toss in all of the labor productivity improvement over that period, the real gain in the stock market as measured by the leading edge of the speculative mania—the NASDAQ 100– rose by 7X more than the total output of the economy.

As a reminder, the holy grail of “economic growth” boils down to labor hours + productivity gains. That’s it; there is no more.

So expressed in annual terms over that 13 years period, you get the following: So here is the fundamental thing about stock market manias as they reach their blow-off tops. As the stock indices crank relentlessly higher, the risk of ruin silently rises by leaps and bounds.

Indeed, here is exactly what happened last time we visited the current level of manic excess in the winter-spring of 2000, when the dotcom bubble peaked and than splattered into what became an 83% plunge into the down-shaft: Needless to say, the frogs basking in the near-boiling water at 4,704 claimed that this time was different, and that every dip was to be bought. Then of a sudden, they were not around to tell about what boiling water really feels like.

Back then, the invincible stock was Cisco—the Tesla of its day. What happened next, took the Cisco speculators 20 years to forget.

In fact, this time is worse. The market’s disconnect from the economy is now larger than ever as measured by the fundamental market cap to GDP ratio: At nearly 190% it makes the year 2000 look like child’s play.

Likewise, valuation ratios have never before in history been so extreme in terms of market cap to sales. 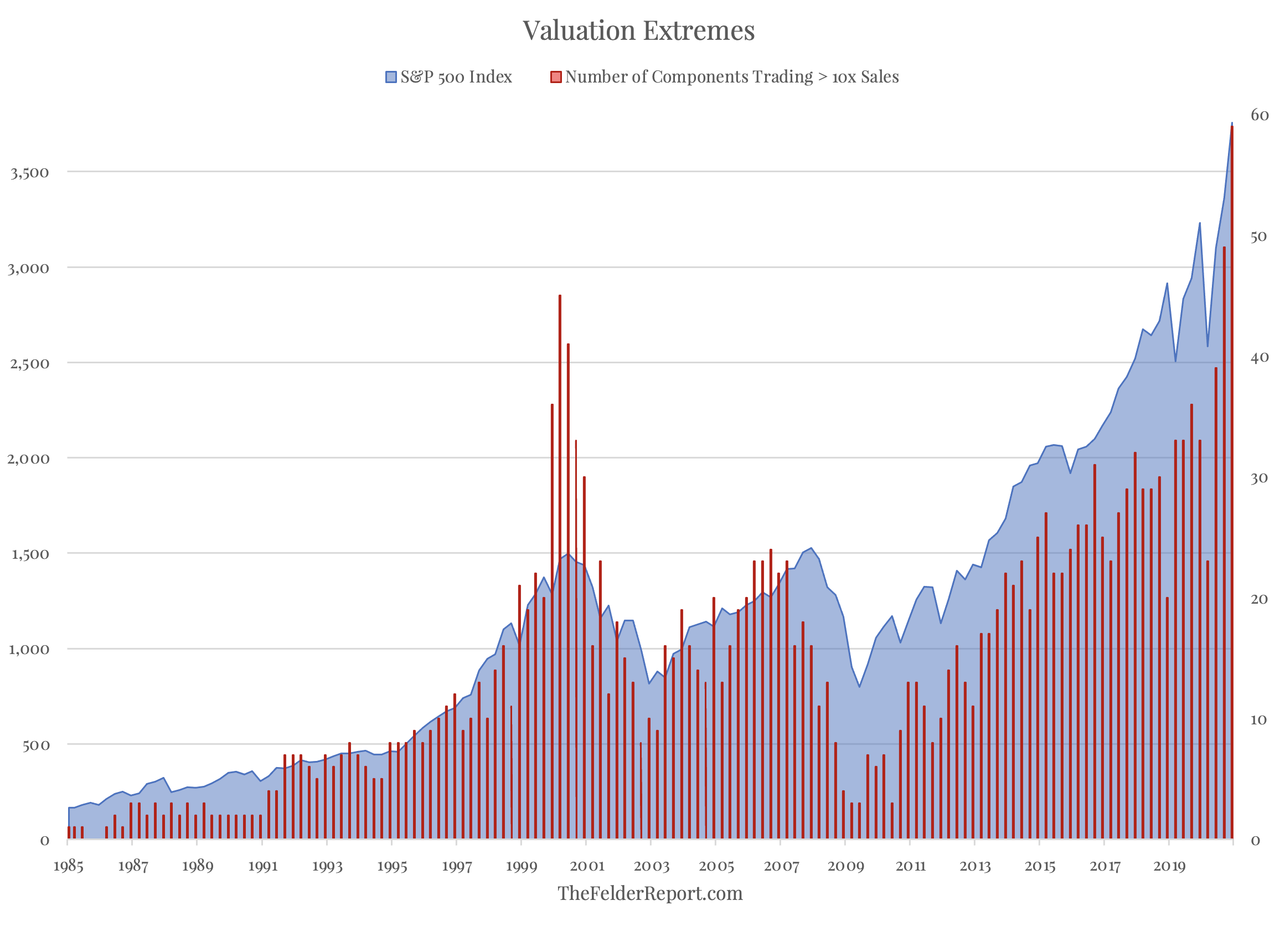 Back then, of course, at least the nation’s governance system was working and there was a modicum of sanity among the leadership of the bipartisan duopoly. At year-end, in fact, we had a month-long hanging chads ordeal in Florida, but it ended with a new president and no mobs storming the Capitol.

By contrast, here’s what happened today, as headlined by the on-line Wall Street Journal:

Needless to say, that bit of quasi-insurrection did not phase the punters one bit. Late in the afternoon session, Sleepy Joe assured them that another “stimulus” bill was on its way, and that it would be in the trillions.

And that’s all it took to generate a stampede to the “buy” keys as more frogs plunged into the boiling kettle:

“The price tag will be high,” Biden said of his planned package in Wilmington, Delaware. He promised to lay out his proposals next Thursday, before taking office on Jan. 20. “It will be in the trillions of dollars.”

You got to love that endless free stuff, but, yes, it is completely nuts!