This is not going to end well. The fools in the Eccles Building have effectively cancelled the law of supply and demand in the government bond pits, thereby eliminating the one thing that keeps elected politicians at least minimally sober fiscally: Namely, the legitimate fear that excessive US Treasury borrowing will cause “crowding out” and sharply rising interest rates, which, in turn, clobber home-buyers and businesses alike.

That fear is long gone, of course. So not surprisingly, today we learn that for the 12 months that ended in January, the Federal deficit totaled a whopping $3.47 trillion, or 16.2% of GDP. That baleful outcome was owing to the fact that outlays tagged $7 trillion while receipts barely amounted to $3.5 trillion.

Here’s the thing. Purported Covid pandemic or not, financing 50% of government outlays with borrowed money is banana republic stuff; it’s a sign that fiscal sobriety and rationality have been obliterated in the nation’s capital. 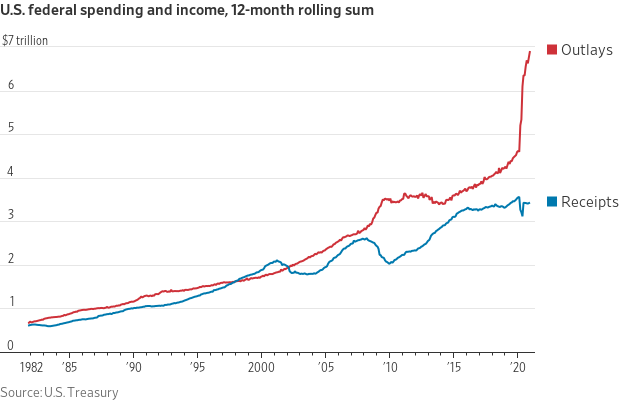 At the heart of this fiscal breakout is soaring outlays for entitlements. Their cost will explode in the decade ahead owing to the retired population surging from about 56 million at present to more than 70 million by 2030, and then steadily higher to upwards of 100 million thereafter.

In both dollar terms and as a share of GDP, total government transfer payments (including the state and local share of outlays, which are mostly driven by Federal programs such as Medicaid and cash welfare) have been relentlessly climbing since 1960. But during the last year of massive Federal unemployment benefits and stimmy checks to 90% of the population, transfer payment outlays have accelerated to a whole new level.

As is evident in the chart above, the gains on the Donald’s watch of 0.75% of GDP per year leave all of his predecessors in the dust. During “big spending” Obama’s tenure, for instance, the entitlement burden on GDP grew by just one-eighth of that rate at 0.12% per year and during Bush the Younger’s time the gain was 0.36%per year.

Only during Ronald Reagan’s mostly abortive effort to slowdown the growth of entitlements did the share of GDP actually decline modestly (and temporarily), from 10.2% to 9.4% of GDP.

Moreover, not only did Trump leave the numbers in horrid shape, but more importantly he led the GOP to embrace and sanction two exceedingly deleterious policy principles that opened the door to a runaway extension by the Dems now in power in all three branches.

We are here referring to the Federal topper benefits on the state-run unemployment insurance (UI) system and helicopter checks to 160 million taxpayers with a means test so lenient that families with $199,000 of income still qualified.

In round terms after the pending $1.9 trillion Biden package is enacted on a straight Dem vote under the reconciliation procedure, Congress will have pumped upwards of $1.5 trillion into UI topper benefits and stimmy checks when the affordable and justifiable amounts would have been zero.

The only thing that has kept the UI benefit system in check over the decades since the 1930s is interstate competition. That is, the state-run UI system is Federalism at its best because if benefits get too generous, the state-by-state employer taxes which pay for the system soar and businesses march their operations and payrolls out of the states which get out of line.

Essentially doubling the UI weekly benefit, in fact, unleashes a whole new round of moral hazard among working Americans.

As it is, the Fed’s absurd zero interest rates policies have destroyed the incentive to save among 80% or more of US households which basically live hand-to-mouth anyway. But now the precedent that Washington will ride to the rescue of households who have pitifully meager rainy day funds and cash reserves already is the coup d’grace.

Going forward, the UI system will be far more costly because recessions and other economic disruptions have not been abolished. Accordingly, that adds another layer to the ballooning cost of retirement and medical entitlements being driving by the Baby Boom retirement wave.

This long term chart of the annualized run-rate of UI disbursements speaks for itself. During the current Covid-Lockdown episode the peak run-rate topped $1.4 trillion, or nearly 9X the peak rate of $160 billion during the so-called Great Recession.

Consequently, we are in a whole new zip code of spending because the Trumpified/GOP essentially destroyed the implicit Federalist principle that kept UI benefits in check. Still, the three rounds of stimmy checks, which will add up to nearly $1 trillion, are far more deleterious because they represent a whole new transfer payment principle: Namely, handing out borrowed money to well more than 130 million taxpayers who don’t need it and have suffered no material loss of employment or income, as we will document more fully in Part 2.

Suffice it here to note that during the worst days of the Lockdowns last spring, the peak level of workers drawing Federal/state UI benefits was about 30 million. But with the enactment of the pending Biden installment, which retains eligibility for households up to $100,000 and $200,000 for singles and married couples, respectively, roughly 160 million taxpayers will be receiving their third walking around money check in less than a year.

Self-evidently, this could get habit-forming, and, in fact, the stimmy checks are a thinly disguised stalking horse for the ballyhooed UBI (universal basic income) dream of the progressive-Left, Silicon Valley and an increasing portion of corporate America, as well.

To be sure, the bipartisan duopoly which rules in Washington (Senators Mitt Romney and Marco Rubio are typical and both support a form of UBI through family benefit payments regardless of need) is so euthanized by the Fed’s monetization of the public debt that they have given no thought whatsoever to the disastrous long-term fiscal implications of institutionalizing UBI.

So they have just crab-walked into UBI through the back door of short-term extensions of the stimmy checks and increasingly generous family allowances under the tax code. Therefore, based on all that has transpired since last February and the further extensions of Federal UI topper benefits and stimmy checks now pending, we do not see how the permanent annualized cost ends up much less than $500 billion per year.

That may well be gussied up for political salability in the form of tax code based child or family benefits rather than pure stimmy checks, but the ramifications will be the same. To wit, the soaring future cost of retirement and medical entitlements is already breaking the fiscal bank. With the new layer of Trumpian welfare, a fiscal disaster is virtually guaranteed.

In Part 2, we will amplify on today’s CBO release of its latest 10-year outlook. It shows that the public debt will hit $40 trillion by 2031, and that’s based on an implausibly optimistic rosy scenario.

Yet even with those rosy assumptions, the public debt share of GDP, which was about 40% of the economy before the 2008 recession—will surpass 100% this year, on its way to 195% of the economy in 30 years.

And as we said, that is under the rosy scenario of no recessions, no new tax cuts, no stimulus bills, and no new  spending programs for the next 30 years!

Stay tuned for the unvarnished truth of the matter.