When the historians sift through the monetary wreckage of the present era, Madman Mario Draghi will surely rank high on the list of villains. As Zero Hedge aptly noted on the occasion of his swan song this week:

In short, his legacy is nothing short of catastrophic, although his advocates will quickly chime in: he managed to kick the can for 8 years. Well, he sure did, and in the process made the accumulated imbalances, and the coming crisis, that much worse.

You need look no farther than the red arrow below which tracks the $3.0 trillion (EUR 2.7 trillion) explosion of the ECB’s balance sheet during his eight year tenure, which more than doubled the already bloated ECB balance sheet that Draghi inherited.

More importantly, it computes to an absurd 11.2% annualized growth rate at a time when the nominal GDP of the Eurozone grew at just  2.4% per annum. So where was the raging economic emergency that induced the ECB to blatantly violate every traditional norm of financial common sense and the historic central banking rules that existed until well into this century?

And that’s to say nothing of actual sound money precepts.

After all, even Uncle Milton Friedman—-a true believer in monetary central planning—insisted that the money supply and the high powered central bank credit which fuels it should grow no faster than nominal GDP.

Yet Draghi caused the ECB’s balance sheet to soar by 4.6X the growth rate of nominal GDP. That is, he took central banking into a whacko realm that only cranks and kooks had ruminated about in the past.

As shown in the chart below, during his eight year watch, the ECB’s balance sheet grew by EUR 2.69 trillion, whereas nominal GDP rose by only EUR 2.06 trillion.

That’s right. This blithering fool pumped new fiat credit into the European financial system that was equal to 130% of the gain in nominal GDP during his eight year tenure.

The fact is, there was no raging emergency in Europe between 2011 and 2019—-just a tepid economy that groaned under the cumulative weight of socialism, dirigisme and oppressive burdens of government debt and taxation. In fact, no bottom dropped out of the eurozone economy at all—with real GDP growth almost exactly matching the tepid gains of the prior eight years:

The above two figures are both stunning and dispositive. To wit, if Draghi’s massive flood of fiat credit didn’t move the growth needle a whit, then the problem lies way beyond the pay grade of Keynesian central bankers.

The obvious implication, of course, is that what needs to be cut is taxes, spending, borrowing and regulation, not interest rates. Yet in the case of Draghi it can be well and truly said that when your brain is so small and single-track that everything looks like a nail, you will swing your hammer early and often—no matter what collateral damage may ensue therefrom.

Nor, apparently, was he done until they actually ushered him out of the ECB’s snazzy new headquarters in Franfurt. As a parting gesture, he cut the ECB’s deposit rate from an already lunatic -0.4% to -o.5%, and restarted QE at a EUR 240 billion annual rate.

At his parting press conference, Draghi said the new round of quantitative easing will start next month with asset purchases of 20 billion euros ($22 billion) a month, and won’t end until “shortly” before the first rate hike.

Since economists don’t expect the ECB to lift rates before late 2022, that implies another $800 billion spree of money printing at the ECB. No wonder he averred that the Eurozone will need a,

“…..highly accommodative stance of monetary policy for a prolonged period.”

Folks, this is just brain-dead ritual incantation. Right now the ECB is only months away from an even more absurd conundrum besides the fact that all this madcap money printing has not stimulated growth, inflation or even private credit growth, as we document below.

But even short of that there looms the current sensible rule that the ECB should not own more than one-third of the debt of any of its 19 member countries; and that its bond buying program should track the so-called “capital key”, which is the share of ECB capitalization (a function of shares of GDP) attributable to each member.

On that basis, Germany will be soon tapped out with no more debt eligible for ECB purchase. In turn, that condition will either give rise to screechy voices demanding that Germany abandon its constitutional balanced budget rule in order to generate debt for the ECB to purchase or it will elicit calls for the ECB to dive even more heavily into the purchase of corporate debt—including, apparently, more junk bonds!

The table below, in fact, is one knowledgeable analyst’s projection of what the ECB will have to buy through 2021 to accommodate its EUR 20 billion per month QE target– if the 33% limit and capital key rules are not relaxed. To wit, by mid-2021, the ECB would own upwards of $800 billion of ABS and corporate debt!

It really doesn’t get any more insane than that. Yet the financial world has been so mesmerized and dumbed-down by Keynesian central banking that it today lauds the tenure of the lunatic who made this happen. 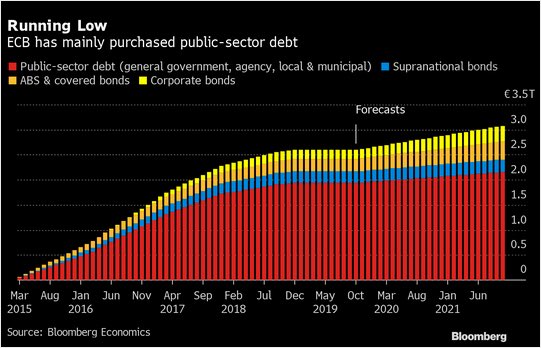 To be sure, this sustained massive injection of central bank credit snatched from thin air was ostensibly in furtherance of macro-economic objective—especially the sacred “just under 2.00% inflation” target. But the chart below tells you all you need know.