Once upon a time there was something called Event Risk that hovered over the financial markets, as did an even scarier relative known as the Black Swan.

Apparently, no longer. The Fed has so completely destroyed honest price discovery and euthanized fear of risk so thoroughly that the End of Times itself would likely illicit a new round of dip buying.

The fact is, Black Swans as well as Red Swans (and an Orange Swan, too) are circling everywhere. That is, there is virtually no reward left atop the Mother of all Financial Bubbles while staggering risks metastasize by the day. Yet the algos and day traders remain nonplussed owing to the delusion that the Fed and other central banks will never again allow markets to correct by more than a few percentage points.

So more gist for that delusion is the real sin of the Fed’s latest abject capitulation to Wall Street’s demands for juice. The $324 billion added to its balance sheet in the last 11 weeks cannot possibly alter the course of the nation’s $21 trillion economy and the $85 trillion of global GDP in which it is intricately immersed. 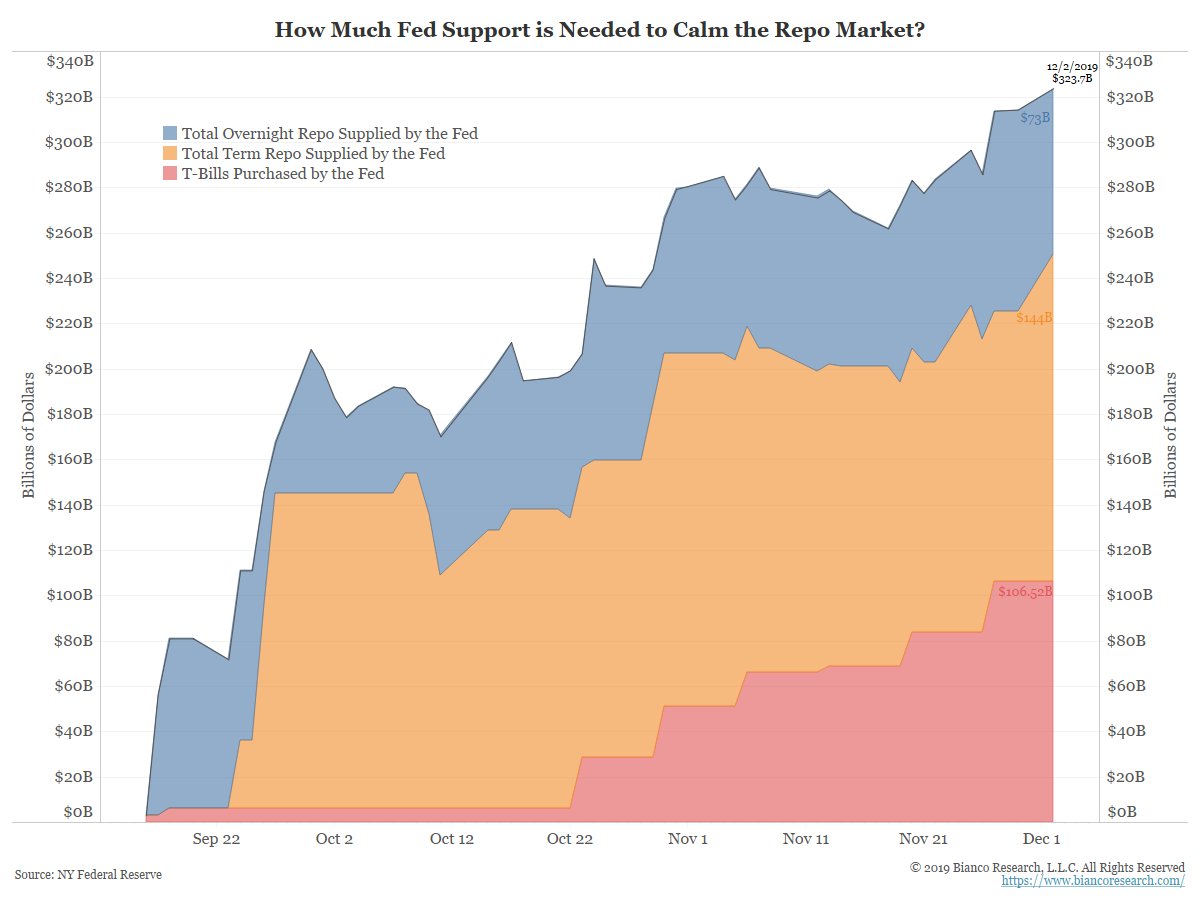 But it did fuel more stock buying by the algos, which, in turn, induced day traders and homegamers to hit the”buy” key without regard to anything except the Fed’s own “buy” key thumping. Just on Friday and today, for example, the Eccles Building provided another $65 billion of 4-week term repo through year end at the bargain rate of 1.62%.

That’s right. The Fed is furiously pumping money into the bond market so that that the dealer cost of carry for Uncle Sam’s prodigious debts will remain at 74 basis points below the running inflation rate of 2.36% (16% trimmed mean CPI).

Still, there is no doubt as to where all this freshly minted liquidity went. To wit, it never left the canyons of Wall Street, and, in fact, since the  launch of  its “Not QE” $60 billion per month T-bill purchase program—on top of the new overnight and term repo facilities—the stock indices have moved higher every week save for the one week in mid-November when the Fed’s balance sheet shrank by a smidgeon.

The absolute insanity of the Fed’s latest Easy Money gambit—three rate cuts plus $324 billion of balance sheet expansion since late July—cannot be gainsaid. It is simply causing the financial bubble to reach an even more absurd aspect, thereby guaranteeing when it does eventually burst that the C-suites will launch into another “restructuring” frenzy— throwing inventories, redundant workers and impaired assets overboard with malice aforethought.

That’s otherwise known as the modern form of Recession that neither Wall Street nor the Fed heads ever see coming.

Then again, how could they?

Recessions nowadays are triggered by bubble collapses on Wall Street, not Credit Crunches on main street, as happened in your grandfather’s economy. So the Fed heads and their Wall Street masters never see it coming because recessions are embedded in central bank induced bubbles, but both Wall Street and the Eccles Building are utterly bubble blind.

Stated differently, what the Fed is actually doing in the name of extending the current crippled expansion is simply hyper-fueling the catalyst for the next financial crisis and its jarring spillover to the main street economy. It has actually done this twice already during the last  two decades—–turbocharging both the dotcom and housing bubbles in a manner that guaranteed the resulting main street contraction would be all the more painful.

This time, however, the Fed has outdone itself. Even as it has inflated to the bubble to its finally truly incendiary extent, the main street economy both here and abroad has been visibly deflating, setting the stage for an extended recession that could go on far longer than ever before.