Sometimes things get so absurd that it takes a blithering idiot to clarify matters. It just so happens that while foraging through our junk email this morning we discovered one such inadvertent genius—a Michael Carr, Chartered Market Technician for Banyan Hill Publishing and editor of Peak Velocity Trader, among others.

The exploding Federal debt is no problem whatsoever claimed Mr. Carr, but his reasons were so strikingly stupid that we cannot bear to even summarize them for fear of seeming to set up a straw man. So here is the man’s argument in full:

From that perspective, the U.S. government is in good shape. The chart below shows interest payments as a percent of GDP. The trend is down since interest rates peaked in the 1980s. Lower rates make the debt more affordable even as the amount of U.S. debt rises.

Federal Interest Outlays As % Of GDP 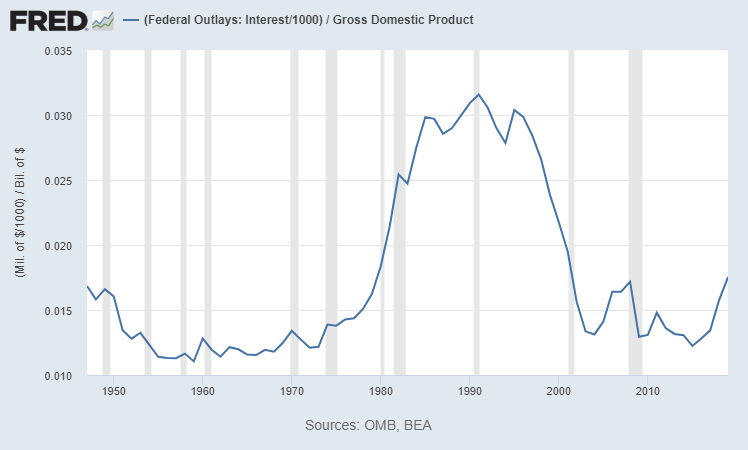 As long as interest payments are manageable, there isn’t a crisis. This is true for governments, just as it is for mortgage borrowers.

But governments have an advantage over consumers. While consumers can face repayment problems if their income falls in a crisis, governments can print more money when faced with a crisis.

Printing money can lead to inflation, but that might not be a problem for the U.S. in the 2020s. Since the Federal Reserve holds much of the debt, it can simply forgive some obligations.

So, although the federal debt is high, it shouldn’t matter to policymakers or investors.

We doubt that the delusional herd on either end of the Acela Corridor would express themselves quite this primitively, but it’s in effect what they implicitly believe. Namely, that—

Then again, the implications of each of these propositions is nothing short of mind-boggling.

The first proposition, for example, implies that real money private savers have recently been infected with an incurable form of financial masochism. Consequently, they will never fail to forgo current consumption so that they can funnel a portion of their earnings into the debt markets where it will disappear into the maws of inflation over time, while helping leveraged gamblers to become ever richer and sucklers on the teats of government welfare and spending to wax ever more luxuriantly.

Short of this kind of staggering and permanent level of private saver masochism, however, the only other solution to financing today’s brobdingnagian levels of public debt is for JM Keynes to get his most ardent wish post mortem. We are referring, of course, to the final euthanasia of the rentier (saver) class, such that some day soon any and all debt issuance will be financed by central bank purchases.

There is really no logical alternative because the ultra low government debt service costs depicted above amount to a self-licking ice cream cone. That is, if rates are low enough to keep the service cost of soaring government debts minuscule and “manageable”, they are also so low as to promote virtually unlimited new issuance: De minimis carry costs and guaranteed refi markets are surely the Devil’s Workshop incarnate—the place where issuers will always find excuses to borrow more and more.

Stated differently, the indefinite extension of the chart depicted above has a world class pricing problem: The saver/masochists or the central bank money-printers, as the case may be, must  be able to absorb nearly limitless debt issuance or the law of supply and demand will have its way, meaning interest rates will rise—and probably robustly so—in order to clear the markets.

Apparently, the reason that is not obvious to dunderheads like Mr. Carr—or Washington and Wall Street more generically—is the good old Recency Bias. That is, lately the aberrant and metastatic suppression of interest rates by the Fed and other central banks has been so severe and extreme that the historical fact that markets ordinarily clear at significant spreads over inflation has become lost knowledge.

It is as if the bond market has slowly become the financial equivalent of the proverbial frog in the pot of boiling water. We are now at the boiling point where the frog should finally be feeling the heat. But not quite yet because the lunatic $250 billion per month of bond-buying by the Fed and ECB combined (or upwards of $500 billion per month by all of the world’s fellow-traveling central banks) continues to keep this condition hidden and the law of supply and demand at bay.

Nevertheless, here is how the bond market got boiled frog-style over the last 36 years.

What this means, of course, is that if the Fed does not continue to “clear” the bond markets via its current massive rate of purchases, rates will rise to a level that the remaining un-euthanized rentiers are willing to tolerate; and, further, that as they rise, the long-hibernating bond vigilantes will be aroused from their slumber, too.

That’s because under the baleful regime of Keynesian central banking, the legendary bond vigilantes of yore have been transformed into leveraged speculators in the bond pits. Owing to the current massive rate of QE, the Fed and other central banks are implicitly targeting bond prices.

This means that buying government bonds (and their equivalents) on 97% repo at virtually zero cost of carry and collecting the spread against a thin slice of equity capital at risk (<3% of footings) is virtually a risk free way to mint arbitrage profits.

The nice Keynesian nincompoops like Janet Yellen and Jerome Powell fix the repo borrowing rate at close to zero because they “must” enforce their money market target (i.e. Federal funds rate) and they also set a floor under the bond price by announcing massive open-ended purchasing schedules. Call it the financial equivalent of shooting fish in a barrel.

Moreover, this is not just another central bank stupidity that makes rich speculators even richer. What it also does is breed greed on top of the natural quotient of such which is inherently attracted to trading markets.

Accordingly, fast money speculators buy what the central bankers are buying, and as the latter buy more and more (viz. $120 billion per month at the Fed alone), the speculators do the same. They are turbo-chargers of central banker stupidity.

To gather where this is going doesn’t take much imagination, however, even if such is momentarily in short supply on both ends of the Acela Corridor.

To wit, as governments borrow more and more because they can without the pain of rising interest rates or triggering the old-fashioned dread called “crowding out”, and as the C-suites jump on the band-wagon by borrowing huge sums to buy-back their own stock and otherwise de-equitize their balance sheets, there is only one way to keep rates pinned at current absurdly low levels.

Namely, the central banks must buy virtually limitless amounts of sovereign and private debt. If they do not, yields will rise to clear the markets and thwart the flood of new issuance, but even a small increase in yields from today’s subterranean levels will cause prices to fall sharply in the $100 trillion global bond market.

But here’s the thing. Bond prices cannot be allowed to fall be even a smidgen because on the margin (where the price is set) the bond is owned by seekers of capital gains and arbitrage spreads, not income investors looking for (nonexistent) yields.

That’s really what the fools domiciled in the Eccles Building have actually done: They have transformed the income-based bond market into a speculators casino, and at the end of the day that’s the rub.

The bond vigilantes have not been extinguished as a trading class; they have just been genetically modified to make money buying the bond on leverage, just as the sold it back in the days before Greenspan destroyed honest trading and price discovery based on intra-market supply and demand.

Accordingly, if the price action in the bond pits ever turns seriously negative for even a modestly sustained interval, it’s Katie-bar-the-door time. The same leveraged front-runners turbo-charging central bank inflation of bond prices today will pivot with alacrity to selling massive positions supported by trillions of repo leverage.

Then, of course, the 34-year spread compression shown in the chart below will erupt in the opposite direction with such force that all the central bank printing presses in the world will not be able  to scoop up fast enough the trillions of bonds which will be on sale.

After the fact, in fact, the saner angels still standing will wonder how in the world the $100 trillion global bond market was turned into the the greatest bubble in human history right there in plain sight. That is, where the brown line crossed below the purple line into unsustainable financial madness. When all is said and done, Michael Carr’s idiocy quoted above–that the Fed has a printing press— is the predicate on which the entire edifice of today’s central bank generated Ponzi Scheme rests.

And the probability that it is sustainable much longer is about as likely as today’s Goldman Sachs claim that Tesla will soon be worth $725 billion (it’s new highest on the street price target) or 1200X net income!