If you don’t believe that monetary central planning has crushed whatever remained of intelligent life on Wall Street, consider this statement today from the White House press room:

The White House on Tuesday said it has begun studying options to close down different parts of the U.S. southern border, but expressed hope the drastic move could be avoided.

“Eventually, it may be that it’s the best decision that we close the border,”White House press secretary Sarah Huckabee Sanders told reporters.

“Democrats are leaving us absolutely no choice at this point,” she said.

This is stark raving madness, and its mere tabling should strike fear into the minds of both carbon and silicon based trading units. But it apparently doesn’t because the players in the casino are now indentured to moral hazard.

That is, they assume that the arms of government and agencies of the state will never, ever again allow the stock averages to tumble—to saying nothing of crashing in flames like they have twice already this century.

At bottom, that is what’s priced-in: A perpetual, unfailing Washington Put. In view of the massive and accumulating economic and financial headwinds in the world and the extreme octogenarian stage of the business cycle, there is no other way to explain the market’s continuous regression to mindless dip-buying at today’s nosebleed valuations.

Traders are being given every opportunity to get out of harms’ way, but on a day in which the news flow was only moderately bad they seized on the outlier and ripped higher by more than 1%. As we demonstrate below, however, that tiny tick in China’s PMI reported Sunday night was no “green shoot” whatsoever.

Stated differently, the central banks have become so fearful of the stock market Frankenstein they have created that they refuse to let the markets correct; and by constant episodes of retreat and capitulation like the current Powell Pivot, they positively crush any latent tendency for two-way trading to resume, and for short sellers to survive for more than a few weeks of short-lived viability.

What this means, of course, is that there is no check on the headline reading algos and momentum-chasing day traders. Under their reflexive bids, the market grinds higher because it is not really a market.

After all, an honest and healthy capital market would be pricing-out the dangers at hand. But thanks to the destructive works of the central banks over the last several decades there is nothing left of financial discipline—just endless, syncopated upward drift until the proverbial black swan arrives to burst the bubble. Or, this time around, one of Red or Orange colored hue, as the case may be.

Still, yesterday’s 300 point rip on the Dow is about as clueless as it gets. There is every evidence that the wholly artificial central bank manipulated recovery since March 2009 has reached its sell-by date all around the planet, and that what needs to be priced-in is a long L-shaped recession owing to the exhaustion of central bank tool kits.

For example, the deposit rate at the ECB is still negative 40 basis points, and its balance sheet has been hideously bloated by $3 trillion just since 2014. Yet here is what’s happening to the locomotive economy of the eurozone: German industrial production is crashing, meaning the Europe as a whole is already at stall speed and that an official recession is just around the corner.

Even more importantly, the Washington Put is dead as a doornail. The Fed heads are already lining up in a circular firing squad; the Donald is a one-man facsimile of the same; and the bitter partisan division between the House and Senate has utterly paralyzed Capitol Hill.

Indeed, what the most recent outburst of the Donald’s unhinged impetuosity with respect to his Border Wars really says is that the conditions of September 2008 vanished long ago: The Donald is not about to get down on his ample knees in the event of a financial flash fire, and Nancy Pelosi is not about to help him bailout Wall Street—come what may.

So instead of ignoring this morning’s White House insanity, Wall Street should be making a bee-line for the sidelines. A southwest border catastrophe, an outbreak of a European auto tariff war or a breakdown in the China talks are only the most immediate of the numerous catalysts for a financial meltdown which hover overhead.

And by catalysts, we mean a sudden, unexpected shock to the complacency of the day traders and momo-chasers—such as would occur in the event of even a partial closure of the Mexican border. Indeed, the price of avocados have already shot the moon–rising 35% in one day— just on this weekend’s Trumpian bluster.

As we demonstrated yesterday, of course, actually closing the border to $1.7 billion of daily goods flow and 16,500 northbound trucks would induce an instant national economic calamity; it would make the post-Lehman meltdown of Q4 2008 look like a Sunday School picnic.

That’s because after three decades of NAFTA, the US/Mexico territorial border has become invisible to massive, intricate, infinitely interconnected north/south supply chains. Some of these involve materials, parts and sub-assemblies which criss-cross the border multiple times before they become saleable finished goods.

Therefore, the cascading ripples of economic chaos that would be triggered by the mere announcement of a border closure are virtually unfathomable.

So, apparently, Wall Street believes that the Donald is some kind of irrelevant Fake News sideshow. Upon the above Sarah Huckabee announcement this AM, the stock index tickers barely flickered.

Or, in the alternative, this latest close-the-border contretemps is being viewed as nothing to sweat because it’s just another of the Donald’s patented art-of-the deal wild man acts designed to gain negotiating leverage with Mexico.

But here’s the thing. Even the threat of closing the border is so completely ludicrous and unhinged that no one in their right mind would even make it—meaning that the Donald most definitely isn’t.

He has already proved that with his previous resort to the unthinkable when he slapped $30 billion of tariffs on $250 billion of Chinese goods used by US consumers and producers.

Those actions involved a total abuse of the section 232 (national security) and section 301 (unfair trade practices) discretionary authorities, and prove that not only does the Donald have no clue about what he is doing on trade policy, but that he has also become a tool of the K-street business lobbies and doesn’t even know it.

The K-street lobbies being serviced by one of their own—-chief negotiator, Bob Lighthizer— don’t give a whit about the Donald’s bogeyman. That is, America’s humungous $443 billion trade deficit with the Red Ponzi, which actually does evidence the massive off-shoring of US production and good jobs that have left Flyover America high and dry.

That wound to America’s prosperity can’t be corrected by a trade deal, of course, because it was caused by bad money and the Fed’s demented drive to force US inflation—domestic prices, wages and costs— higher by 2.00% per year.

Still, it will soon be evident that whatever “deal” is reached will not be about bringing back production and jobs to the US, but about securing nicer treatment for US banks, insurers, tech companies and manufacturers who want to do business inside the Red Ponzi, but be exempt from their statist rules.

Moreover, it will also become evident that whatever “deal” is cobbled together will not remotely end the Trade War or risk that it could escalate out of control under the Donald’s impulsive watch. That’s because any agreement—no matter how many hundred pages long in English and Chinese—will be exceedingly contingent, fragile and subject to misunderstandings and breakdowns regarding compliance and enforcement measures at any point in time.

In that context, the question recurs. Why in the world would the casino be pricing-in an endless business cycle and a guaranteed Washington Put, when neither are  remotely plausible.

With respect to the former, for example, the most important economic news yesterday was a flat-out downer. February retail sales were down again, and on a year-0ver-year basis were up just 2.2%—barely enough to keep up with inflation.

Indeed, in inflation adjusted dollars, February sales were down by 1.3% from last fall’s high, and are at a the same level as December 2017. That is, the key measure of America’s shop until they drop economy is no higher than it was 14 months ago. When viewed in terms of the rate of change, it could not be more obvious that the momentum from last summers tax-cut induced “sugar high” is already fading fast. And exactly why this sharp deterioration is going to turn on a dime and come surging back in the second half of 2019 per the talking heads’ patter on bubblevision yesterday is not evident at all—except that’s what they always say when the first half is visibly weak. Indeed, when it comes to the real main street economy, Walgreen’s 13% plunge today on its earning disappointment is the more reliable benchmark. While same-store pharmacy sales eked out a 1.9% gain, the real message about the health of the American consumer was in comparable front-end retail sales, which were down by 3.8% in nominal terms and even more after accounting for inflation.

Likewise, the news on auto loans was even more instructive. That is, the debt encumbered American consumer is not some kind of linear robot that spends and spends, world without end.

What happens, instead, is that when the debt cycle matures, incremental loan-financed demand becomes progressively weaker as households get tapped out, and the cost of loan carry steadily rises.

Since then, of course, average transaction prices have continued to rise—increasing from $31,924 in March 2014 to $36,534 this March according to the industry’s leading purveyor of transaction data.

Now that’s a 2.7% per year increase and it compares not at all to the BLS index–monitored by the Fed–which claims that auto prices after adjustment for hedonics (quality improvements) are not up at all during the past five years.

Unfortunately, workers do not get “hedonics” adjustments in their pay envelopes. They pay the market price including higher down payment amounts, driven by the rising purchase prices. These are also up by nearly 3% per year at $4,217 presently compared to just $3,665 in 2014.

In any event, the bottom line does not lie–even if the Fed heads have their own heads buried in the official government massaged incoming data.

Accordingly, the average current monthly payment on a prime auto loan is now $554 or 17% higher than the $473 average of 5 years ago. That means the supply of eligible borrowers continues to shrink—the very thing that eventually results in falling sales, bloated inventories, production cutbacks and recessionary conditions in the macroeconomy.

In light of these retail sector warnings, therefore, what exactly were the “green shoots” that the casino claimed was behind Monday’s mindless rally?

Why, it was the same old, same old China rebound story. And even then it was a tiny blip in the manufacturing PMI that posted just above the waterline at 50.5 compared to 49.6 in the prior month.

Yet as one analyst counted, there are have been more than a dozen of these PMI blips (green circles) in the last nine years—even as the real growth rate (red line) of the debt-saturated Red Ponzi has been slouching ever lower.

As shown below, the more debt the Red Ponzi takes on, the slower its bloated, drastically malinvested industrial economy staggers forward.

Indeed, when it comes to analysis, the last green blip in the chart above is all noise. What matters is the trend of the red line below, and Sunday night’s confirmation that it continues to slump toward the lower left was absolutely no reason at all for a 300 point rip on the Dow. 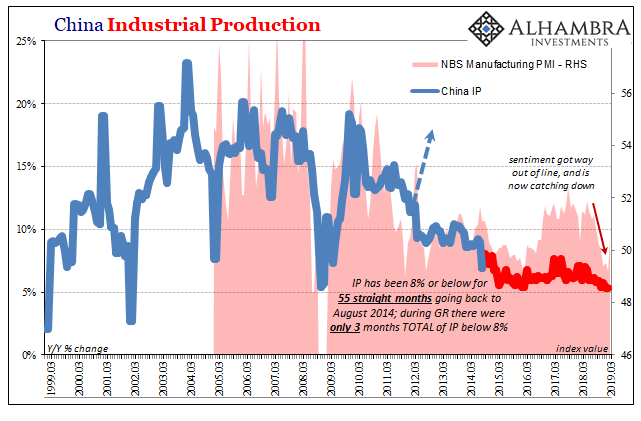 Needless to say, when the Red Ponzi cools down, the rest of Asia gets a big chill. Accordingly, Japan’s PMI has also slipped into contraction.

And as we will develop further in tomorrow’s post, the cascade across the entire global economy is now following suit.