If you want some measure of how clueless the robo-machines and day traders are—just look at the stock market’s out-of-the-blue surge at 10AM today.

All the indices were actually in the red based on abysmal in-coming economic data from China overnight and the Washington data mills this morning.

But all was forgiven when yes-man Stevie Mnuchin hinted that a deal to lift the aluminum and steel tariffs (10% and 25%, respectively) on Canada and Mexico would be coming shortly; and also that a decision to punish Germany for sending (hostile?) BMWs, Porsche’s, Audi’s and Mercedes to America would be deferred for possibly six months.

Folks, the state and its central banking branch is always and everywhere the enemy of capitalist prosperity and real wealth gains. So when it lurches into mindless economic intervention—attention must be paid.

What we are talking about is the completely lunatic reason that actually made Mnuchin’s seeming “stick save” possible in the first place. To wit, the Donald’s actual steel and aluminum tariffs and his prospective auto tariffs are based on an alleged threat to national security, thereby giving him the authority under the 1962 trade act to punish American consumers and businesses who dare to purchase aluminum, steel or cars from dangerous “furiners”.

But the Pentagon doesn’t use Beemers except maybe to shuffle generals to the officers club, and when it comes to steel the very idea that Canadian and Mexican steel threatens national security is beyond absurd.

In fact, DOD needs less less than 2 million tons of steel per year, and even that is mainly embodied in annual procurement of new aircraft carriers, warplanes and tanks where we’ve got way too many already.

Still, the US industry produced 86.6 million tons of steel products in 2018 and another 13.3 million tons came in from Canada, Mexico and Brazil—America’s three top import suppliers and source of nearly half of total US steel imports. Since we do not believe the latter three western hemisphere neighbors are suicidal enough to declare war on Washington or even cut off current exports to the US, the blithering idiocy of these steel tariffs is plain as day.

That is, there is 100 million tons of steel supply inside the Atlantic and Pacific moats or 50X the Pentagon’s actual peak requirements. If it can’t find the steel it needs from that—it probably can’t find any actual threats to national security, either.

Stated differently, when you have a government attacking German luxury sedans and Canadian flat-roll, you have a government that’s capable of virtually unlimited economic harm. And if you are in today’s massively over-valued stock market, you have still another reminder to get out of the casino before the third egregious financial bubble of this century makes contact with the pin it has been implicitly searching for.

You also have a strong reason to pay attention to a fragile economy that within weeks will win the dual prize for the longest and weakest business expansion in US history at 120 months of age.

To be sure, as a member of the birth class of 1946 we have less and less against mere old age with each passing year. But old age does bring ailments and fragilities and therefore vulnerability to shocks that younger folk tend to take in stride—-and that’s doubly true if you’ve slouched toward the dissolute side of healthy diets and exercise habits.

But that’s exactly what describes this 119 month old business cycle. Nothing has been fixed which caused the last so-called heart attack in September 2008, and all the bad habits which enabled it have actually gotten far worse.

That is to say, the American economy has binged on debt, imports, government spending and speculation like never before, thereby leaving Wall Street vulnerable to the biggest crash yet and main street loaded with record amounts of household and consumer debts.

That’s why any sign of cyclical weakness or faltering of the business expansion at this late stage is especially significant: The US economy simply has precious little capacity to absorb any untoward shocks.

Needless to say, the Donald’s escalating Tariff Wars more than qualify for that kind of intolerable shock, and for a reason that none of the talking heads of Wall Street or the newly ascendant Sino-phobes of Washington remotely grasp.

To wit, it’s not a paint-by-the-numbers thing whereby the talking heads say not too worry because even Trump’s full monte 25% tariff on all $563 billion of Chinese goods amounts to only 0.68% of GDP.

Nor is it a case of what nit-wit alt-right China basher, Steve Bannon, told CNBC this morning about America’s overwhelming advantage in the current contest with Beijing.

He actually called for regime change there because the Chicoms don’t practice a form of state capitalism which he finds congenial; and that unbeknownst to America’s 100 million Walmart-shopping households, we have been at “war” with them for two decades and must now make a do or die last stand.

China has been running an economic war against the industrial democracies for 20 years,” Bannon said, noting that previous presidents – Clinton, Bush and Obama – all ‘blinked’ when it came to trade with China, adding “Trump didn’t blink.“

The standoff with China “cuts to the core of what the United States is going to be in the future,” Bannon said in a “Squawk Box” interview.  “We have all the cards.” –CNBC

The truth is, it’s way too late for learning to live with big tariffs, as the talking heads were gumming about on bubblevision today, and Washington has almost no “cards” that matter in the China Trade War—notwithstanding the pompous expostulation of semi-educated demogogues like Bannon.

The fact is, the debt-besotted, hollowed-out, bubble-ridden US economy has been joined at the hip with the tottering Red Ponzi by fiendishly complex supply chains and intricate financial plumbing networks. While this has given rise to the appearance of  fabulous prosperity in China and undreamed of wealth on Wall Street and in Silicon Valley, it is riddled with fractures and instabilities down below.

Stated differently, what we have is a perverse symbiosis that was generated by three decades of bad money at the Fed, the People’s Printing Press of China and most of the other central banks on the planet.

Should Washington pull the pin on this monetary Frankenstein, as apparently the Donald is fixing to do and the China hawks are clamoring for, we will find out what financial meltdown really means; and that the laws of sound money and financial discipline haven’t been rescinded after all.

For crying out loud, has it actually escaped notice on both end of the Acela Corridor that there has been no increase in any of the major categories of manufacturing output for the last 11 years?

Of course, the bad news this morning was that industrial production was down again in April and is clearly rolling over. Total manufacturing output was down 1.6% from its December 2018 high, while consumer goods production was lower by 1.9% and business equipment by 2.7%.

But the hook on the right hand margin of the chart below is just a flashing yellow light indicating the cyclical momentum is fading fast.

What’s far more significant about the chart is that it confirms the US manufacturing economy is dead in the water, and that all the money-pumping at the Fed and fiscal stimulus from the Treasury—including an increase in the public debt from $9.5 trillion on the eve of the financial crisis to $22 trillion and rising rapidly today—has been for naught.

Indeed, the recency bias has been so suffocating that neither end of the Acela Corridor apparently recalls any longer what a real recovery looks like. To wit, during the same 118 month span of the previous 1990s record expansion, manufacturing output rose by 58%, not declined by 2.5% as it has since November 2007. As we indicated above, the so-called recovery on main street has been fueled by debt and imports. And that has really been going on since the turn of the century.

Even when we take total industrial production—which includes electrical and gas utility output and mining and energy production including the debt-fueled boom in the shale patch—total production is up by only 15% since the year 2000. That amounts to less than 0.8% per annum.

Even when you wring the inflation out of the latter two figures, the story is self-evident. America has been attempting to borrow its way to prosperity by artificially boosting living standards with what is now $4 trillion of consumer debt on top of $11.5 trillion of mortgages. Needless to say, none of this was done to the American economy by the nefarious Chicoms of Beijing. In fact, it was actually their stupidity that enabled the US to raise its total public and private debt burden from a precarious $53 trillion at the time of the financial crisis to more than $72 trillion today.

In a word, America doubled-down on debt and the Chinese were benighted enough to swap their goods and the sweat of their people for Washington’s endless emissions of US treasury paper.

Indeed, without the Fed, the People Bank of China and the other central banks scarfing up nearly $22 trillion of government paper since 2004, the whole symbiosis could never have happened.

For instance, since the last peak in Q4 2007, transfer payments are up by 80% or $1.0 trillion per annum–a huge factor bolstering the spending levels of up to 150 million Americans who live in households getting some type of transfer payment. When you look at the China side of the equation, the outcome is equally precarious.

We will take up the matter in greater detail tomorrow, but suffice it here to note Jeff Snider’s excellent observations about China’s desultory April numbers, and the fact that money pumping by the PBOC has reached the end of the road there, as well

But if China’s manufacturing woes aren’t being cured by PBOC action, then rebalancing is supposed to offset external problems. For quite a lot of years now, people have been making the claim that this country is in transition. A very beneficial and opportunistic one. Echoing the Communist government, they do always fall right in line when technocrats speak, Economists have said China’s economy is becoming more internally oriented.

This shift toward a modern, service-based system more like the mature Western economies, means a very different source of growth and strength. Even if industry falters, hundreds and hundreds of millions of now middle class Chinese consumers will more than make up for it. 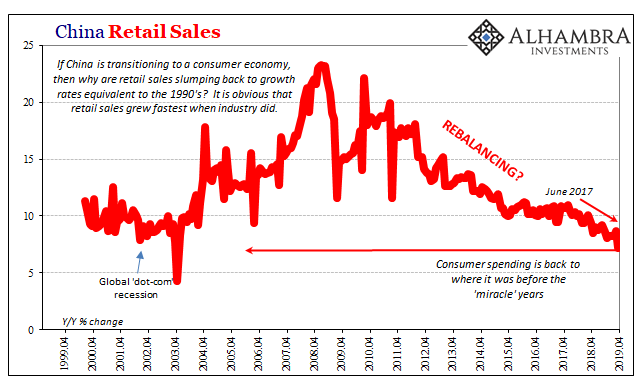 Like with most things Economists claim, there isn’t any evidence to support them. Despite “stimulus”, despite rebalancing, retail sales in the month of April rose only 7.2%. That’s the worst number, by far, since May 2003 and really since the Asian flu of 1998 and 1999. 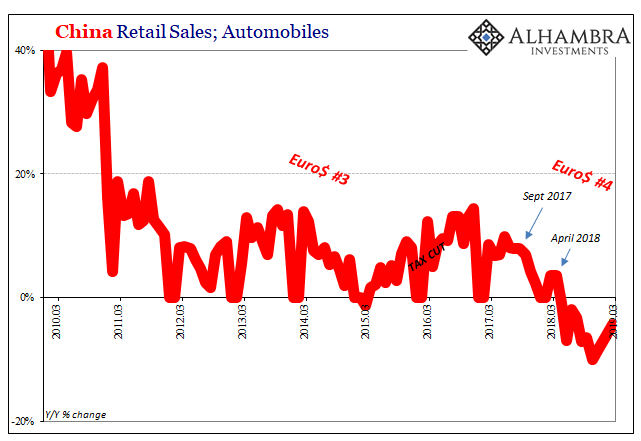 …….Instead, the only acceleration in FAI we find is through state channels. Overall FAI slowed in April on an accumulated basis, down to 6.1% from 6.3% in March. The reason was private investment.

Since the start of the year, growth in this crucial piece of China’s economy has continued to decelerate. Urban, middle-class China was built on Private FAI. Accumulated year-to-date, it was up just 5.5% last month, down from 6.4% in March. For the month of April alone, Private FAI increased by just 3.8% year-over-year.

It used to be that 20% in a single month was alarming. 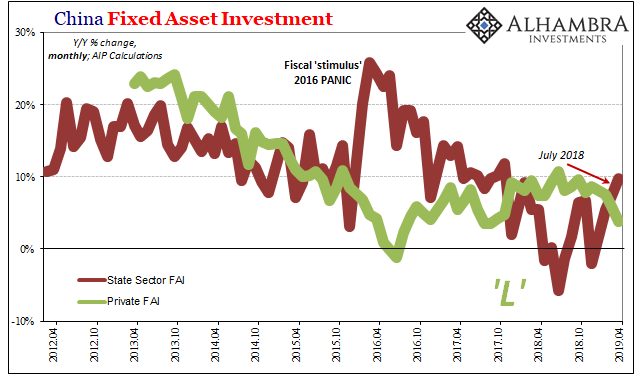 Thus, we have the two parts of FAI moving in opposite directions. As the private economy slows substantially, Beijing is ramping up fiscal stimulus in addition to whatever it is the PBOC is actually doing. But it’s not a huge program. This is nothing like early 2016, much more modest suggesting the official motivation is contrary to Western imagination.