As we said yesterday, the cyclical turn is underway.

And, now, even the liquidity-besotted equity markets are beginning to take notice. That’s because the Donald’s Trade War is on the slippery slope to downright ugly—-while the incoming data is so uniformly bad (except for the ultra-laggards like unemployment claims and consumer confidence) that even the Wall Street perma-bulls are grasping for some green shoots to spin.

That’s perhaps also why the chart-monkeys are beginning to fear that a triple-top has been put in, and that the market’s internals are getting more than a tad worrisome. Compared to the recent cyclical highs, for instance, the following sector line-up clearly evinces clawmarks of the Bear:

Indeed, the third market “top” may well be the charm that ends the third and greatest bubble of the 21st century to date. What we mean is that after Monday afternoon’s drastic reversal to the downside and today’s drubbing, the 2800 Maginot Line on the S&P 500 has been decisively breached.

As Gary Kaltbaum colorfully and succinctly observed this morning, even the “price action” has turned extremely negative. And remember, the chart monkeys which drive the daily ticks are completely agnostic as to the big picture and fundamentals—-that is, until the bearish evidence becomes too overwhelming to ignore and the Swan of colored hue unmistakably puts in its appearance, as was the case with the Lehman bankruptcy filing on September 15, 2008.

The market continues its turn for the worse…but you knew it already as we warned you in our last report to you on May 23 that:

This time there is little doubt that the Swan is lurking and we have even less doubt that it’s hue is Orange. The fact which should be obvious by now is that the Donald has no clue about the frailties of the US economy he inherited or the incendiary landmines of speculation that have been planted throughout the warp and woof of the financial system owing to more than a decade of egregious Fed money-pumping and financial asset inflation.

So the Donald is going to be in for an immense shock when the stock markets and US economy begin to visibly fall apart, and not only because that will thoroughly negate his ludicrous Best Ever economy narrative.

The even greater shock will come from the vicious told-you-so attacks of the Dem opposition and their MSM stenographers because it will go unanswered by his alleged GOP friends, who will have abandoned ship long ago.

In this context, it is well to recall the events which preceded Tricky Dick’s August 1974 demise. Nixon actually won an overwhelming victory in 1972 with more than 500 votes in the Electoral College and a massive 42 million to 28 million landslide in the popular vote.

Not only did he not have the disability of the Donald’s hair of his chiny-chin-chin fluke capture of the Oval Office, but Nixon also owned a string of IOU’s from other GOP politicians that stretched from coast-to-coast and which represented 26 years of non-stop politicking. That is, there was hardly a Republican Senator, Congressman, Governor, state legislator or even major city mayor in the land that had not gotten a boost from Nixon’s rubber chicken circuit exertions.

To be sure, they didn’t much like old Tricky Dick. But they owed him.

Nevertheless, when the Fed-fueled artificial boom of 1972 and 1973 fell apart and the US economy plunged into the stagflationary torments of 1974, the political landscape deteriorated slowly at first, and then sharply and relentlessly as Nixon’s triumphal second term launch of  early 1973 decayed into the Watergate crisis and economic unraveling of 1974.

But what capped it off was the unrelieved grind of the stock market lower in response to the twin economic and political setbacks that beset the invincible Richard Nixon of November 1972. From an index level of just below 120 on the S&P 500 at the time of Nixon’s second inauguration ceremonies, the market dropped to just 76 on the day he was put aboard what has now become the Richard Nixon Memorial Helicopter ride to Gonesville.

That was a 37% decline and a powerful reminder about what is what in Republican politics. That is, the GOP pols can take a sharp increase in pink slips among the working classes and a spell of economic contraction and negative GDP. But the GOP donor classes cannot live with a two-fifths reduction in their stock portfolios.

That’s why they abruptly tuned against Tricky Dick in 1974—even as they gushed over Ronald Reagan’s deficit fueled economic boom and stock market eruption in 1984. It’s also why they lost faith in George Bush the Elder in 1992 and abandoned the party of George Bush the Younger during the meltdown crisis of 2008.

And this gets us to the Donald’s unenviable predicament. Not only do the Republican politicians of Capitol Hill and the GOP denizens of the national party machinery not like Trump. More importantly, they owe him nothing.

Indeed the US House is swarming with poobahs and careerist who have lost their committee and subcommittee chairmanships due to the Donald Trump-inspired wipeout in the 2018 midterms; and their Senate counterparts are not far behind because they are savvy enough to realize that save for the calendar quirk that put 24 Senate Democrats on the ballot in 2018 (out of 33 seats up for election), they would be sitting on the outside with their noses pressed up against the glass, too.

So what would it take by way of stock market correction to replicate the 37% Nixon decline shown below?

Why just a retreat to about 2140 on the S&P 500. And if that number sounds familiar it should.

It’s exactly where the S&P 500 stood on the evening of November 8, 2016 when the futures market had tanked by nearly 800 Dow points after it suddenly became apparent that Donald Trump might defy all the odds, rebuke all the prognosticators and up-end the bipartisan etiquette of the Washington ruling elites.

Of course, the markets reversed sharply in the wee hours of the morning after the rumor had become the news.

But as we will essay in Part 3, the futures market was right the first time. Donald Trump never had any prospect whatsoever of making MAGA.

He came to bring down the corrupt crony capitalism and neocon warmongering of the Imperial City, and now he is well on the way toward Mission Accomplished.

That’s the part that the casino is just now beginning to dimly appreciate—even as there are a lot more wake-up calls to come. 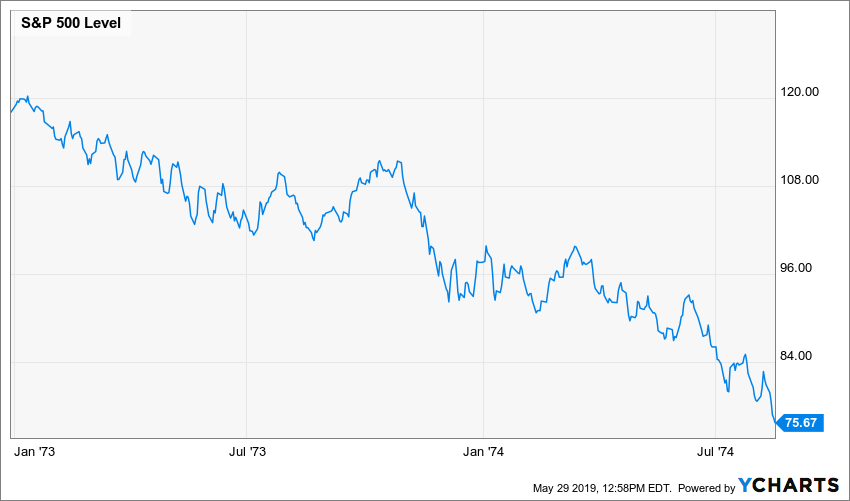