By a vote of 354-60 yesterday the U.S. House of Representative proved that Imperial Washington is addicted to war, and that the level of ignorance, bellicosity and mendacity among the people’s representative has reach appalling heights.

Having never voted for Washington’s pointless, illegal and destructive fomenting of Syria’s calamitous civil war in the first place, as the constitution requires, the bipartisan congressional mob actually had the gall to vote to keep US forces in the middle of a centuries old Kurd/Turk conflict that has zero implications for the security and safety of the American homeland. And we mean that as in zero, nichts, nada and nugatory.

The pretext, of course, is that the ISIS caliphate will come roaring back to life absent the armed resistance of  the Kurdish-SDF forces positioned in Syria’s northeast quadrant; and that with these bombed-out, impoverished, no-count towns, villages, farms and dusty plains back under the black flag of ISIS, next up will be IEDs in the New York City subways.

That’s just blatant claptrap. If Syria becomes whole again, the Islamic State doesn’t have a snowball’s chance in the hot place of reviving. And letting Syria become whole again was exactly the purpose and consequence of Trump’s sensible decision to remove American forces from the Syria/Turkey border.

That singular move paved the way for the already emergent tripartite deal between Turkey, Damascus and the Kurds. The latter would:

Moreover, once this emergent tripartite deal is reasonably finalized and implemented, the remaining clean-up of the giant political and military mess Washington has foisted upon Syria could be accomplished with alacrity. Together with its Russian, Iranian and Hezbollah allies, Damascus would make short shift of the remaining jihadist fighters in Idlib province (dark brown area) now known as Hayat Tahrir al-Sham, which was formerly called al-Nusra Front and before that Al Qaeda.

In short, the Donald’s bold decision to stand down rather than dither in place forever ala the Afghan fiasco has paved the way for a swift end to the horrific Syrian Civil war. The latter caused more than 500,000 deaths, generated upwards of 9 million internal and external refugees, utterly ruined the Syrian economy and civilian infrastructure and dangerously roiled the entire middle east.

Needless to say, with Syria whole again and Damascus able to militarily secure its own territory with the help of the Russian air force and the professional military detachments of the Iranians and Hezbollah,  there won’t be any ISIS caliphate reviving itself anywhere on the map below.

Nor would there be any reason for Washington’s war addicts to tie-on another binge of full-throated fear-mongering about the threat of “radical Islam” and the barbaric head-choppers of the short-lived, flukish Islamic State.

Even a cursory examination of the history, in fact, reminds us that the caliphate was actually enabled, fostered and armed by Washington’s regime change interventions in Iraq and Syria. Had the neocons not caused Washington to plunge into the 2011 Syrian uprising with billions of weapons, training and walking around money, there would have been no armed civil war in Syria; ISIS would not have implanted itself in Raqqa and in the north and east of Syria; and Washington would not have had cause to arm the Kurdish separatists, which had long been both a thorn in Damascus’ side and viewed as an existential threat by the Turks. And that get us to yesterday idiotic House resolution, most of which was ignorant hot air in the form of gravely worded whereas clauses run amuck. But here is the operative phrase and the meat of the matter,

Whereas an abrupt withdrawal of United States military personnel from certain parts of Northeast Syria is beneficial to adversaries of the United States government, including Syria, Iran, and Russia: Now, therefore, be it resolved…..that Congress opposes the decision to end certain United States efforts to prevent Turkish military operations  against Syrian Kurdish forces in Northeast Syria…

There you have it. It’s not really about the Kurds or ISIS at all. The crocodile tears for the former flowing out of Washington at the moment could fill a modest sized lake.

The truth is, Washington’s attempted destruction of Syria as a functioning state was always about waging a proxy war against Iran and violating Syria’s sovereign air space and territory in order to clear it of the Iranian, Russian and Hezbollah forces that Damascus had legally invited to participate in its governance and security arrangements.

Yet that’s how the Empire rolls. Get the John McCain’s and Lindsey Graham’s of Imperial Washington looking at you cross-eyed and you are likely to have cancerous interlopers like ISIS planted in your midst and domestic ethnic and political factions armed by Washington and mobilized against you—and sometimes each other.

That happened aplenty in Syria as the residual clashes at this very moment between the Pentagon sponsored Kurdish-SDF and the CIA-sponsored and Turkey-supported Free Syrian Army (FSA) so clearly illustrate.

In that context, it is absolutely true that pictures are often worth a thousand wars, and this one’s a classic. It depicts the work of some American F-15s which bombed a large ammo storage dump US forces had hastily vacated near Kobani on the Syria/Turkey border. The purpose, apparently, was to insure that it did not end up in hostile hands. 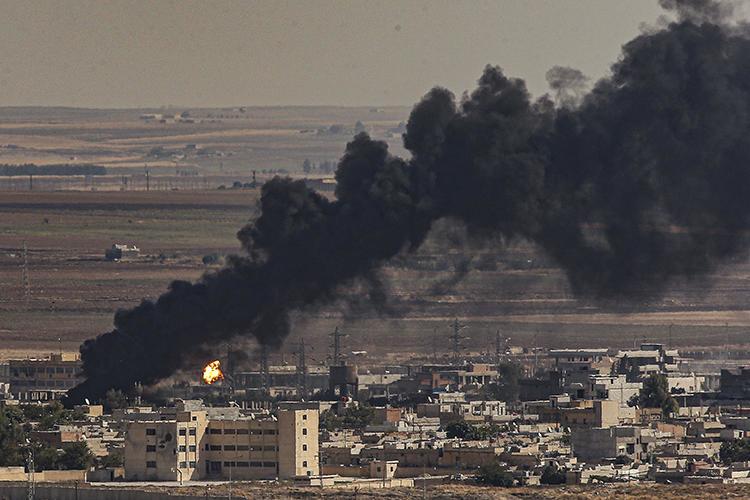 Then again, the “hostile” forces in question do not refer to remnants of ISIS, the Assad government, meandering Iranian Quds forces in the area or even Hezbollah warriors up from the south. As the Pentagon briefer made clear, Washington bombed what had once been a large cement factory to save it from our allies, not our enemies: