During well more than 50 years of observing politicians in action, we have never seen a crew as obstinately stupid as Jay Powell and his band of reckless money printers. Even Lyndon Johnson eventually saw the light on his demented mission to bring the blessings of the Great Society to the Mekong Delta and threw in the towel rather than advancing to the real slaughter advocated by his war-hawks—nuking much of Southeast Asia.

Not JayPo. Figurative speaking, this meathead does indeed appear to be intent upon nuking America’s debt-entombed economy with inflationary disorder and growth-impairing malinvestment and waste.

As to the latter, it needs be recalled that reckless financial speculation is not just a gentleman’s sport that eventually ends in tears for the Wall Street punters alone. To the contrary, the far more deleterious impact is that in the manic run-up to the blow-off top its sucks huge and mushrooming amounts of capital and labor into the pursuit of wagering rather than productive investment, thereby shrinking the economy’s stock of productive resources and its capacity for growth and wealth generation in the future.

For instance, there was this illustrative tidbit today on the Q1 results for Robinhood Markets Inc. To wit, it’s key source of revenue tripled compared to Q1 last year.

As is now generally understood, Robinhood is in the business of enticing homegamers into stock speculation on the basis of zero cost trades, and then selling the resulting order flow to market makers who use high speed trading algorithms to skim the vigorish (e.g. front-run) from Robinhood’s customers.

As the Wall Street Journal noted this AM:

Millions of amateur investors downloaded Robinhood’s app in the first quarter, drawn in by the run-up in meme stocks popular on Reddit’s WallStreetBets forum. Such rapid growth in users and revenue is likely to appeal to potential investors in Robinhood’s coming initial public offering, one of the most eagerly awaited listings of the year. The strength of its business up until January prompted new and existing investors to pump a whopping $3.4 billion into the company just three months ago.

That, of course, was in response to the late January trading interruption during the Reddit short-squeeze, but that headline churning episode didn’t end up denting Robinhood’s business at all. February revenue from payments for order flow at Robinhood totaled about $121 million, or nearly 7% more than what it earned in January. 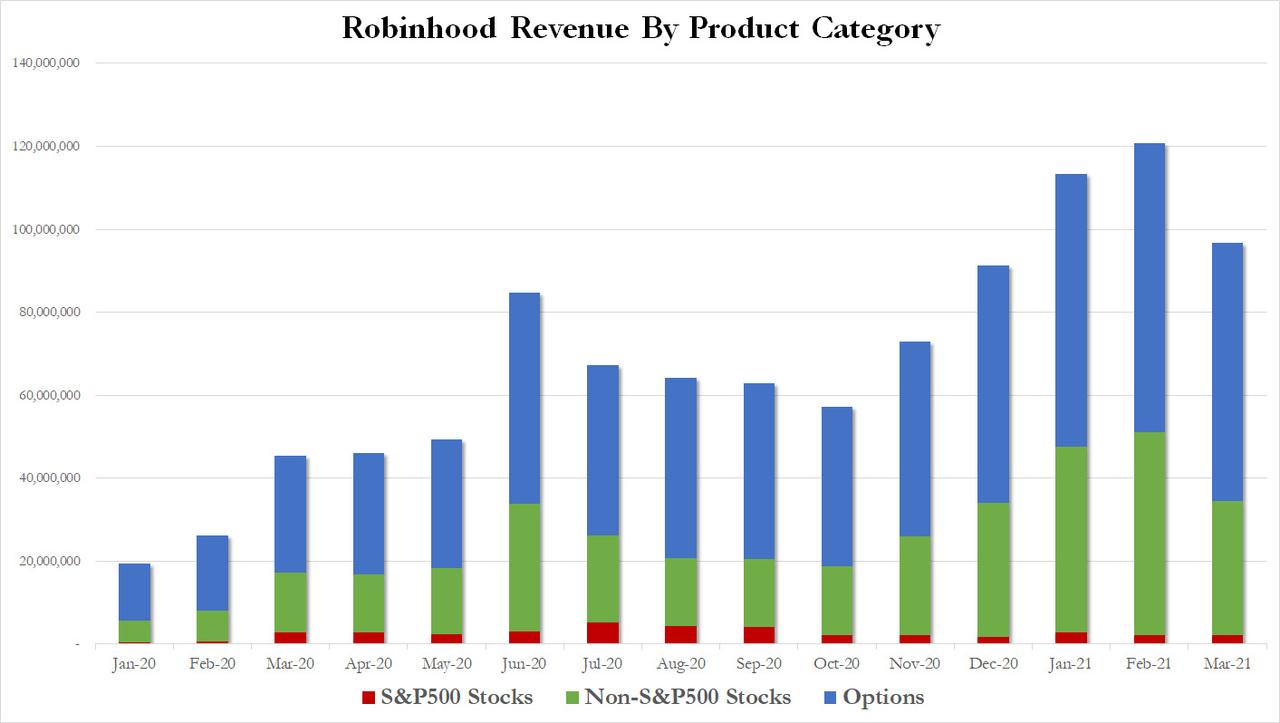 Needless to say, this whole story embodies malinvestment on steroids. And it starts with the company’s swarmy marketing campaign claiming that it has enabled the “democratization” of  stock ownership.