What’s wrong with these people?!

We are referring, of course, to Mitch McConnell & Co’s ostentatious visit to Kiev this weekend.

With the sad-sack Senate Republican leadership in tow, the bejowled political hack who leads the ostensible “opposition” party provided still another unwarranted boost to the dangerous megalomaniac pictured at the center of the photo below.

The fact is, Zelensky would rather shame the west into precipitating WWIII than own up to the fact that the aggressive anti-Russian actions of his own government fostered the calamity that now besets his country. Those foolish actions include his pledges to forcibly take back Crimea, join NATO and re-acquire nukes—along with the launch, before Russia’s February 24th invasion, of an all-out offensive against the Russian-speakers of the Donbas. 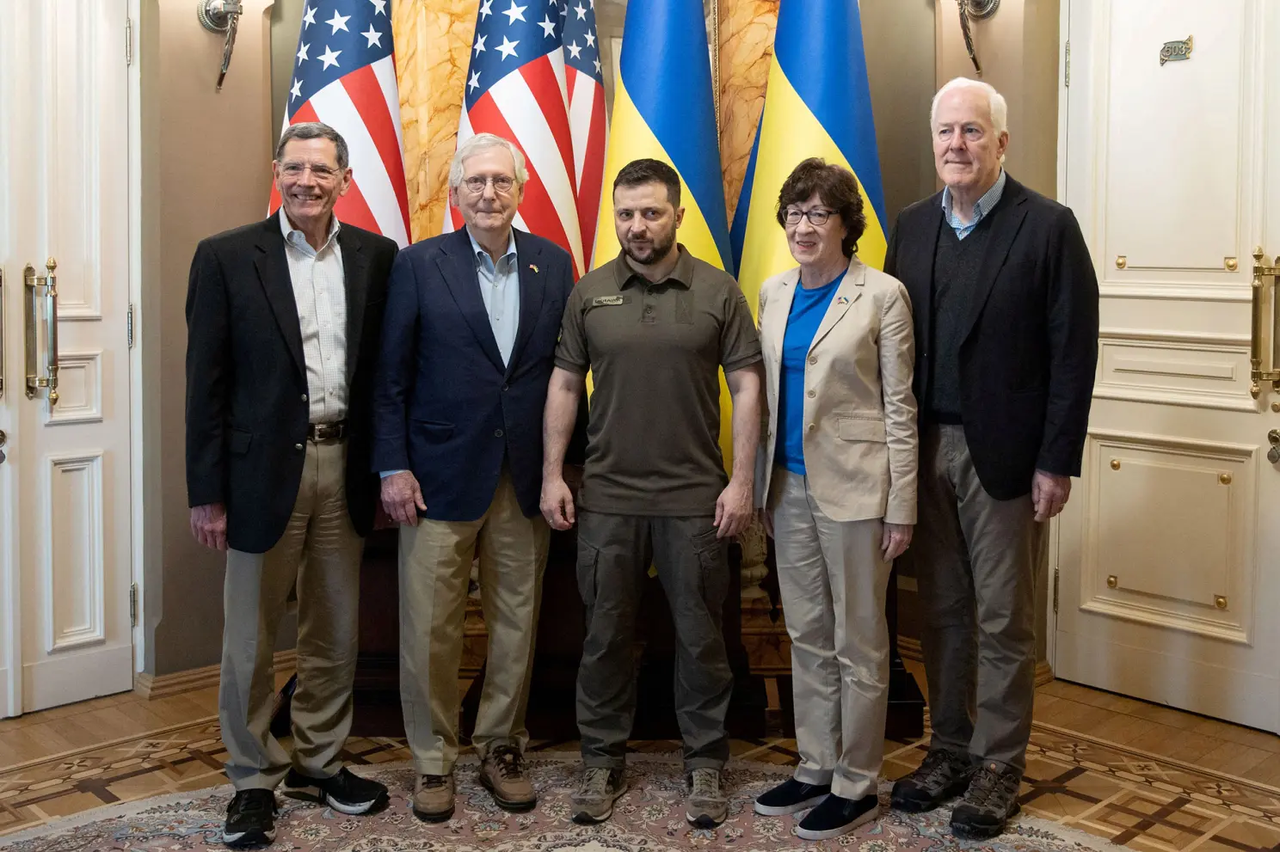 So let us repair to the fundamentals. To wit, the intramural conflict between Russians and Ukrainians in the historic borderlands of Russia has no bearing whatsoever on the liberty and security of the American homeland. Yet here was the GOP leadership pledging America’s unstinting support in treasure, if not blood, for a regime in Kiev that is only slightly less corrupt and authoritarian than Putin’s strong-man kleptocracy in Moscow.

And when we say Russia is zero threat to the American homeland we mean that as in none, nada, nichts and nugatory. There exists a MAD (mutual assured destruction) standoff on the nuclear front; and there’s not a snowball’s chance in the hot place that Russia’s pipsqueak economy ($1.6 trillion of GDP versus $24 trillion US GDP and $43 trillion GDP for all of NATO) could ever fund the air, land and sea armada that would be required to vault over the Atlantic and Pacific moats and wage conventional war on the American homeland.

So what’s the threat? That Russia might occupy Warsaw, Berlin, Brussels, Paris and London, and then impose a Nazi-style draft on their national populations to make the aircraft carriers, air transports, missiles, tanks and supply ships that would be required to invade and occupy the New Jersey shores?

Actually, we can think of nothing more ludicrous. The Russian Army wouldn’t make it halfway through Poland, which Putin already knows and has no intention to prove, let alone reach the Brandenburg Gate and destinations west.

Still, there is no mystery as to why the Senate GOP delegation was in Kiev one-upping Nancy Pelosi & crew’s photo-op of the previous weekend. To wit, McConnell and Republican Senators John Cornyn of Texas, Susan Collins of Maine and John Barrasso of Wyoming have together been suckling on the public teat for 162 years, and that’s really all you need to know.

Years On The Public Payroll:

That is to say, they are chock-a-bloc with the Washington conceit that America is the world’s savior  and policeman. Enthrall to the Deep State machinery of the military/industrial/intelligence complex, they have no compunction whatsoever about betraying the taxpayers and true homeland security in order to maraud the globe as the world’s hegemonic benefactors.

So doing, they peddle blithering nonsense as if it were self-evidently rational and plausible. Such as the notion that stuffing Ukraine with lethal weapons—which are mostly destroyed by Russian air interdiction on their 1,200 kilometer transit from the Polish border to the Donbas front—amounts to a winning strategy.

What it actually amounts to, of course, is a prescription for Ukraine to keep destroying itself until it has sacrificed its last serviceman in the cause of Washington’s proxy war on Putin. In the meanwhile, the risk of accidental nuclear confrontation with a nation boasting 2,000 active nuclear warheads relentlessly rises.

If the situation weren’t so grave it would be comedic. Thus, the McConnell posse “reaffirmed” to Zelensky “that the United States stands squarely behind Ukraine and will sustain our support until Ukraine wins this war” while, not surprisingly, Zelensky used the occasion to urge that the US  designate Russia as a “terrorist state”.

Now, if both of those propositions are not unadulterated madness, we don’t know what is. Nor is there any less sanity in the balance of McConnell’s statement:

Let’s see. If you recognize that Putin has no reason or means to invade Poland, the Baltics or other Warsaw Pact remnants, and that the notion he wishes to revive the old Soviet Union is purely a Deep State scary story, then what nation in the entire region is the incipient aggressor that needs be taught a lesson and deterred?

The fact is, the crusading Washington pols are talking unmitigated humbug. There is no active threat to peace in the region, nor any incipient one, other than the suicidal war in Ukraine being financed and prolonged by Washington pols like McConnell et. al. who have literally lost their minds.

For crying out loud, the $54 billion that Washington will soon have sent to Ukraine since February amounts to 82% of Russia’s entire defense budget; and more than the entire FY 2021 budget of the US Department of State and the Agency for International Development (USAID) combined.

That’s right. These blithering fools are fixing to squander more in a no count corner of the planet than the world’s allegedly Indispensable Nation just spent for purportedly peaceful diplomacy and humanitarian aid around the entire globe in the fiscal year just ended.

Even then, however, an outcome not to Washington’s liking is evident to anyone paying attention to something other than the MSM’s slavish Deep State stenography with respect to the on the ground reality in Ukraine. To wit, the Ukrainian military will eventually be ground to bits in the east and south and a rump government in Kiev will sue for peace, while sending Zelensky back to the clown show from whence he arose just four years ago.

Crimea will remain Russian, as it has been since 1783. And the Donbas and the Russified salient along the northern edge of Black Sea and Sea of Azov will split-off from the rump of Ukraine, as it was before Lenin attached it, reprising as Novorossiya, either as an independent nation or province of Moscow.

Either way, that eventuality will not make one bit of difference to the safety and security of the American homeland, and will be a victory for the right of peoples to cast off the irons of oppressive centralized authority, to boot.

You would think the Republicans of Washington would intuitively understand this far more benign solution to the unfortunate travails of a far off nation that was never built to last.

But then again, they aren’t actually Republicans. To the contrary, they are detestable war-besotted careerists who have suckled on the public teat for so long that they have forgotten what the party of small government both at home and abroad ever stood for.