Well, here is a picture worth a thousand words.

Featured front and center is Mr. Crony Capitalist Never Trumper, Mitt Romney, explaining how another $908 billion of Everything Bailouts–on top of the $3.5 trillion that have gone before—is just the thing to do.

In the above photo Romney is speaking for a “bipartisan” group of Senators including the GOP’s Susan Collins, Lisa Murkowski and Bill Cassidy and Dem Senators Joe Manchin, Mark Warner, Jeanne Shaheen and independent Angus King. He claimed the group was walking a prudent line between Nancy Pelosi’s $2 trillion+ demand and Leader Mitch McConnell’s latest purportedly stingy $500 billion offering:

“We’ve been very careful. This is not a $1.8 trillion stimulus bill,” Sen. Mitt Romney (R., Utah), part of the bipartisan group, said Tuesday. “This is a relief measure—half that amount.”

Wow! If that’s careful, god save us. And if this is prudent bipartisan compromise, no thanks.

After all, keep in mind what the unhinged borrow and spend pols on both ends of Pennsylvania Avenue have already authorized:

By the lights of both Washington and Wall Street, however, that was not enough. So under the proposed bipartisan compromise, small businesses would get a roughly $300 billion infusion for a version of the Paycheck Protection Program of forgivable loans and other aid. This would be on top of the $535 billion of walking around money that has already gone out to 5.3 million small businesses.

It would also include $242 billion to state and local governments and schools. Again, that’s on top of the $180 billion provided in last spring’s CARES act.

Another $180 billion would go to an extension of pandemic unemployment benefits, providing an additional $300-a-week for four months. In turn, that tops-up the roughly $300 billion that has already been dispersed, including the $600 per week topper payment that went to every state program beneficiary through the end of July, thereby lifting the average combined Federal/state benefit to the equivalent of $57,000 annualized.

Then there is another $45 billion transportation bailout. It includes funding for airlines, airports, transit and Amtrak, among others, on top of the roughly $55 billion provided earlier.

If there were a fiscal equivalent of the biblical Noah, he would surely wax proud of the rescue ark that Senator Romney and his bipartisan pals have launched upon the fetid waters of the Potomac. 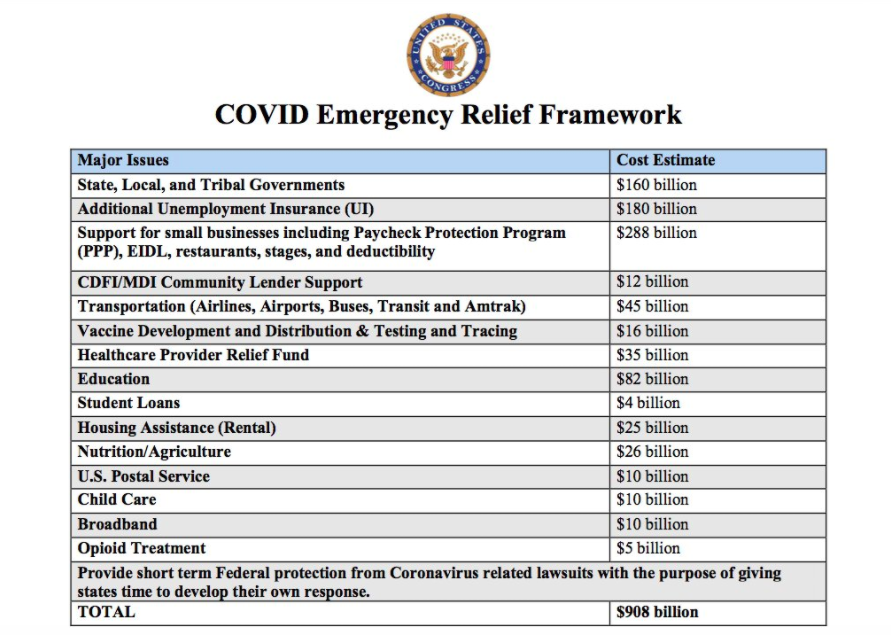 In surveying the above and the $3.5 trillion that’s gone before, we can only exclaim, Holy Moly!

That because compared to this $4.4 trillion of actual and potential Everything Bailouts, the total loss of payroll income to date is just $280 billion or 4.3% of what would have otherwise been earned at the pre-Covid run-rate of wage and salary disbursements in February 2020.

That’s right. At the April Lockdown bottom, wage and salary disbursements according to the good folks at the BEA were down by 10.3% from the February level, but by October the gap had virtually disappeared—with payroll disbursements running just 0.9% below their February run rate.

For the entire eight months of March through October, therefore, the wage and salary impact has been as follows:

So there you have it. These madmen led by one of the great RINO phonies of the present era, are fixing to spend $4.4 trillion or 16X the payroll income shortfall to date.

Indeed, unless the Commerce Department statistical mills have gone totally haywire, total payroll disbursements (both government and private sector) in October were actually 2.1% higher than they were in the same month a year ago:

Not surprisingly, Chuckles Schumer and Nancy Pelosi jumped on the “bipartisan” bandwagon within 24 hours of the Romney et. al. launch. This whole Washington kabuki dance could not have been more transparent:

“In the spirit of compromise, we believe the bipartisan framework introduced by Senators yesterday should be used as the basis for immediate bipartisan, bicameral negotiations.”

Nevertheless, about mid-day it caused the robo-machines and Robinhooders to reflexively buy the dip. After all, further flooding the zone with borrowed funds from the US Treasury which will be promptly monetized by the Fed cannot help but juice the casino yet again.

In fact, at its current monthly QE rate of $120 billion, it would take the geniuses in the Eccles Building just 7.5 months to finance the entirety of Mitt Romney’s swell bipartisan “compromise” with phony central bank credits plucked from thin air. So there are two lamentable parts here: (1)The massive central bank monetization of the public debt; and (2) the runaway bailouts and free stuff which will be a permanent burden on the taxpayers as a financial matter, but even more destructively, a fount of corruption, moral hazard and malinvestment as a substantive matter.

As to the former, here is the expected lunatic path of the Fed’s balance sheet beginning with the pre-Covid status quo ante and projected to one year from now based on the Fed’s current insistence that it will continue to buy $120 billion per month of USTs and GSEs for the foreseeable future. And that’s an outcome you can take to the bank with Sleepy Joe in the Oval Office and Janet Yellen calling the shots at the Treasury Department:

Needless to say, that absolute madness won’t do anything at all for main street, but it will keep interest rates pinned close to the zero-bound and the Wall Street gamblers buying the dips on the TINA (there is no alternative) principle.

Yet how long do these willfully blind central bankers think they can continue to fuel today’s egregious inflation of financial assets and the grotesque maldistribution of wealth it has engendered?

Even the nation’s biggest hedge fund manager, Ray Dalio of Bridgewater, is now implicitly trashing the Fed’s mindless handiwork. These are his charts, and when we reach the point were the top 0.1% of households have accumulated nearly as much wealth as the bottom 90%, then the kind of dire scenario he outlined recently is not entirely a figment of some tinfoil hatted ruminations:

“People and politicians are now at each other’s throats to a degree greater than at any time in my 71 years,” Dalio wrote noting that disorder is rising in a number of countries.

“It is in this stage when there are bad financial conditions and intensifying conflict,” wrote Dalio. “Classically this stage comes after periods of great excesses in spending and debt and the widening of wealth and political gaps and before there are revolutions and civil wars. United States is at a tipping point in which it could go from manageable internal tension to revolution and/or civil war.”

One thing the Kamala Harris/Progressive Left Regency is certain to yammer about is exactly the charts below. So it will take some very special verbal gymnastics and data torture for incoming Treasury Secretary Janet Yellen to explain that the problem stems from Ronald Reagan’s 35 years ago tax cuts, not the massive money printing and financial asset inflation fueled by the Fed ever since.

But leave it to our old friend, credentialed Keynesian and Washington/Wall Street insider, Steve Rattner, to explain what’s coming down the pike. Namely, a Fed flip-flop of its historical and proper stand in behalf of fiscal rectitude to one of outright cheerleading for Washington’s current fiscal bacchanalia.

Of course, the argument is phrased as the Fed is out of dry powder. So fiscal expansion is just another way to help the down-trodden folks on main street get a better economy.

But from that hay-wagon we refuse to fall. The Fed knows full well that money printing is no longer helping jobs or GDP growth—and can’t do so in the face of the Covid-Lockdown Nation shock to the economy’s supply side.

It is therefore taking up the cudgels in behalf of fiscal profligacy so it doesn’t get blamed for the economic setbacks ahead, and so that it has a fig leaf of excuse—accommodating the massive borrowing requirements of the US Treasury by monetizing the debt— to keep flooding Wall Street with liquidity plucked from thin air.

“The reason Chairman Powell is pushing so hard for fiscal stimulus is because he recognizes, as most of us do, that monetary stimulus has not quite run out of steam… but it’s getting to the end of its rope,” Willett Advisors CEO @SteveRattner says.

Whatever the convoluted reasoning, however, the Fed’s drastic and nearly criminal falsification of the price of government debt has surely euthanized the politicians with respect to the very essence of fiscal governance.

That is, when the debt no longer matters, all the historic reasons for fiscal prudence—avoiding waste of economic resources, market distortions, moral hazard, political corruption—goes out the window. Instead, you get abominations like the “bipartisan” bailout fix that emerged suddenly during the past 24 hours.

Prior to the rotten regime of Keynesian central banking and massive monetization of the public debt, for instance, the idea of  dumping what will now be $830 billion of PPP money into the laps of 5-10 million purported “small businesses” would have been beyond the pale.

The fact is, applicants did not even have to prove they were a real business to get a $200,000 or even $2 million forgivable loan. Doubtless, millions of essentially free lancers and shoe-string operations doing business from their kitchen table got the loot.

And even more certainly, even legitimate businesses which had imprudently hocked themselves to the gills without any cash reserves or unused borrowing capacity got themselves bailed-out just the same as those who  had taken financial precautions at the expense of less “growth” or, more likely, less distribution of current business income for personal consumption.

Likewise, when you put out $500 billion in UI assistance to cover a $280 billion shortfall in wage and salary disbursements, economic goodness is likely to be way overshadowed by fraud, sloth and indolence. It is already evident that tens of billions of the UI money was mis-appropriated, including $180 million that went to allegedly unemployed workers resident in the California state prisons!

More importantly, such massive dollops of money distributed via what amounts to coast-to-coast soup lines has completely throttled any serious political opposition to the Virus Patrol generated lockdowns and public fears that have been the justification for the Everything Bailouts in the first place.

Accordingly, we have been left to the devices of foolish old windbags like the sainted Dr. Fauci. In recently back-tracking on his earlier idiotic position in favor of closing the schools, he claimed he was for closing the bars, instead.

But exactly where is it written that a contagion from which 99.98% of the population under 65 recovers justifies shutting down the bars or any other businesses—the property of which is protected by the Fifth Amendment?

Close the bars and keep the schools open,” Dr. Anthony Fauci says, adding that while there is no solution that is “one size fits all,” the “best way to ensure the safety of the children in school is to get the community level of the spread low.”

In the Dalio charts above, there is a panel showing an era of bipartisan cooperation between 1940 and 1980 that has now purportedly vanished into a great gap of partisan bickering. But as we will explain in Part 2, that was a bipartisanship born of fiscal rectitude and sound money—the opposite of the fiscal and monetary libertinism represented by Mitt Romney, Janet Yellen and the Washington/Wall Street consensus for which they speak.