When you are in month #111 of the weakest business expansion in modern history and a mere eight months from the all-time record 119 month expansion of 1991-2001, there is only one thing to do: Namely, forget about the rearview mirror entirely and peer intently through the windshield at the road ahead.

After all, unless the economic gods have abolished this business cycle, there can’t be much runaway left; and that’s especially the case when the economy ahead is facing quintuple headwinds of extraordinary intensity. These include:

Given these palpable headwinds, the “strong economy” meme emanating from both Wall Street and the Trump White House is not only beside the point; it’s actually much misplaced ado about what is actually an unremarkable economic context.

That is, at the tail end of a long-business expansion the macroeconomy always looks to be in the pink of good health. For instance, the last time (and only time) we were at month #111 of a business expansion was April 2000.

At that point, the U-3 unemployment rate was 3.8% compared to 3.9% at the moment; the prior six months rate of job creation was 273,000 per month compared to 192,000 at present; and the trailing eight quarter GDP growth rate was 4.5% per annum compared to 2.5% during the last eight quarters.

Yet a few months later the economy was in recession and the longest expansion in US history had abruptly ended.

Likewise, the 2001-2007 expansion lasted only 71 months, but by April 2007 the rearview mirror offered the same picture of glowing health. The U-3 unemployment rate was only slightly higher at 4.4%, the job creation rate during the trailing six months was about 165,000 per month; and the trailing 8-quarter real GDP growth rate was 2.5%, as at present.

Needless to say, within nine months, the US economy was plunging into the worst recession since the 1930s—again proving that the rearview mirror is not where it’s at late in the business cycle.

Indeed, today both ends of the Acela corridor were braying about the small business federation’s index of optimism reaching an all-time high of nearly 108—purportedly guaranteeing sunny skies ahead.

Not exactly. The last time it was at this level was in early 2005, when the S&P 500 stood at about 1210. What was in the windshield down the road, however, was the Great Recession, and a crashing optimism index.

At length, the S&P 500 bottomed at 670 for a 45% loss and did not return to its early 2005 level until December 2010. In effect, the NFIB index was really forecasting a 5-year sojourn to nowhere in the stock market with brutal spills and chills along the way.

You only need to glance at the chart below to see that America’s small business people has been bamboozled by the Donald’s utterly undeliverable promise of MAGA. In virtually one fell-swoop, the index went from 95 to 105 right after the election and before he was even sworn in or a semblance of his economic program was known.

In fact, given how blatant this index eruption was, do we think the National Federation of Independent Businesses, which is a high-powered Washington lobbying operation, fiddled with their survey results in order to endear itself at the White House?

Yes, we do, and the new 20% deduction for the “pass-through” income of unincorporated small businesses is the proof of the pudding.

Then again, does a sentiment survey drive the future path of our $20 trillion GDP—-when there is a quintuplet of powerful headwinds bearing down on a debt-ridden economy that is stumbling into feeble old age?

We’ll take the unders on that one for a very simple reason: When an economic cycle is old, weak and encumbered with massive debts, malinvestments and egregious financial asset inflation the absolute worst economic program imaginable is the one the Trumpite/GOP has managed to concoct—and against every principle of sound money, fiscal rectitude and free markets, to boot.

That is to say, the last thing Washington should be doing is attacking the main street cost of living with massive tariffs and Wall Street with massive borrowing requirements at the very time the Fed and other central banks are belatedly draining the monumental excess liquidity that the money-pumpers injected into the financial system over the last decade.

The effect of the latter was to “price-in” perpetual cheap debt and a central bank “put” in the financial asset markets; and an overwhelming preference for financial engineering rather than investment in future growth and productive assets in the C-suites of corporate America.

Accordingly, there is no headroom in the system for orderly interest rate normalization and restoration of honest price discovery in the stock market. Instead, the system is heading for a thundering yield shock that will cause $6 trillion worth of ETFs and other passive indexers to stampede toward the exits once the confluence of Fed tightening, Federal borrowing and inflationary tariffs becomes insuperable.

Moreover, in that context there is absolutely no hope that the current Trumpite/GOP policy disaster can be reversed or even meaningfully mitigated.

That’s because on the trade front the Donald has now proven that he is an absolute Neanderthal. Judging by his insane determination to move forward within days with steep tariffs on another $200 billion of Chinese imports—to be followed by a further $267 billion if they retaliate— it is clear the Donald will not stop until he has elicited a 1930s style Trade War; and that the latter will mean the complete disruption of complex and delicate global supply chains in ways that are nearly unfathomable—given the $24 trillion mosaic of international commerce in goods and services.

Likewise, the Congressional GOP has also gone so far off the deep-end on free lunch economics that last night it launched what it deceptively mis-identified as “Tax Reform 2.0”.

This new exercise in fiscal debauchery will make permanent the $2 trillion debt-financed tax cut enacted last winter, which would have cost nearly $3 trillion over 10-years—save for the gimmick of cancelling $200 billion per year of individual tax cuts after 2025.

Now the GOP has shown it true fiscal colors. That means the whole “tax cliff” was just another exercise in the tried and true gimmick that has been used repeatedly to avoid long-term budget discipline since the turn of the century when the dreadful Dick Cheney pronounced that Reagan had proved deficits don’t matter.

Unfortunately, the millions of small business people in America who have gotten their optimism up are about to be bushwhacked by the GOP’s fiscal perfidy. 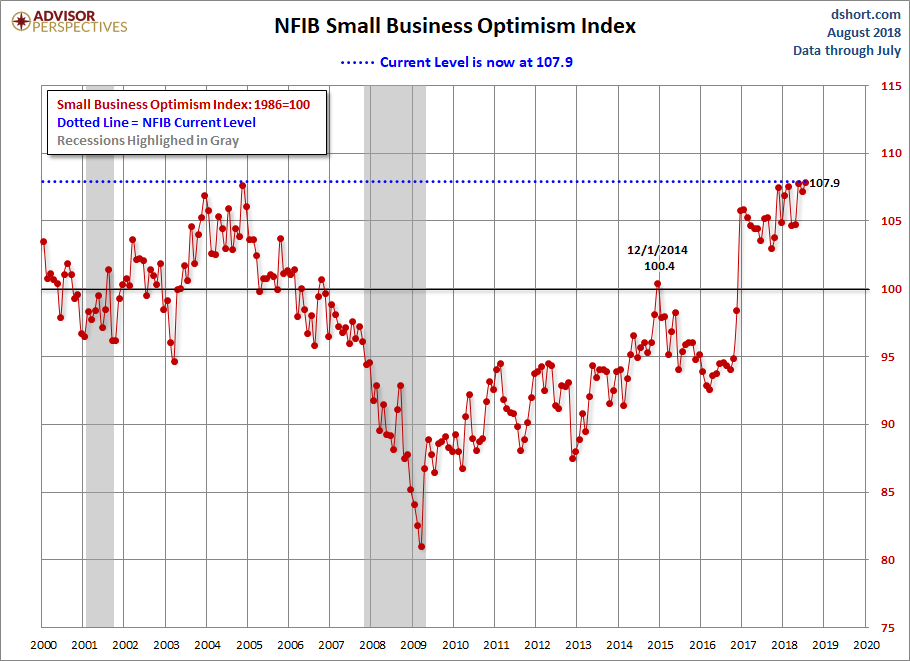 In the meanwhile, the Donald’s constant boasting about an allegedly booming economy is just another exercise in cherry-picking the data that is fast fading in the rearview mirror.

For example, its a plain fact that the BLS projects—and does not literally count”—new jobs at a modeled rate so long as the business cycle expansion remains in tact. And when it breaks, they simply undertake huge revisions (orange bars), such as the 560,000 per months of jobs removed from the original reporting (blue bars) when the Great Recession hit in the fall and winter of 2008-09. The truth is, neither Barry nor the Donald had anything to do with either number.  However flakey, those BLS guestimates reflect the workings of American capitalism—and its millions of businesses and 150 million workers—notwithstanding the obstacles posed by Washington’s money printers, regulators, taxers and spenders.

Likewise, other than the clear aberration in the Q2 GDP number owing to the pull forward of soybean, crude oil and other exports, real GDP growth during the last six quarters under Trump has averaged 2.8% per annum—only a hair above the 2.6% per annum during 2014-2016.

And that get’s us to today blockbuster budget report. The budget deficit for August alone total $211 billion and now weighs in at  just under $900 billion for FY 2018 to date. Yet the full impact of the tax cut and February spend-a-thon will not become effective until FY 2019.

In short, what we are saying is that there is not a snowball’s chance in the hot place that the tax cut will pay for itself or that the US economy will grow out from under the $20 trillion of new borrowing that’s baked into the cake for the next decade alone.

Indeed, if the GOP were actually foolish enough to enact its Tax Reform 2.0, the public debt by the end of the 2020s would total $45 trillion and more than 150% of GDP.

In that context, the claim of the White House’s chief economic bobble-head, Kevin Hassett, that the business tax cuts will pay for themselves because their has been a slight acceleration of CapEx in recent quarters is just more cherry-picking from the rearview mirror.

Here is the longer-term trend in year-over-year business CapEx in the US economy. Self-evidently, it undulates in cycles driven by global production and trade and domestic expansions and recessions.

What has been happening in the last few quarters is not a Trumpian miracle or any noticeable impact of the corporate rate cut—-which in any event has gone almost entirely into stock buybacks, dividends and M&A deals financed with Uncle Sam’s credit card.

Real CapEx growth in Q2 of 7.1% versus prior year essentially represents the rebound from the global commodity, oil and trade bust that occurred after mid-2014, and which was moderately reversed by the pre-coronation credit impulse coming out of the Red Ponzi in 2016 and 2017.

Needless to say, there were 11 quarters on Barry’s watch in which the CapEx grew at 7.1% or better, and actually 11 such quarters under Bush the Younger. But in neither case did it stick, nor did the average trend growth of gross CapEx make up for much more than the consumption of the capital stock during both periods.

As we have repeatedly pointed out, real net CapEx is still below levels achieved at the turn of the century. So, no, there has been no meaningful or sustainable acceleration of CapEx, either. What has happened, however, is that the China pre-coronation boom is fading fast, as depicted in the two charts below. German factory orders are now clearly rolling over, and global trade volumes have again dropped below the flat line.

Needless to say, these figures are in the roadway straight ahead, and are just another reminder that the rearview is exactly the wrong place to focus at this late  stage of the game.

We made exactly these points on bubblevision this AM—despite our Fox Business host’s best efforts to keep the rearview mirror front and center.