Well, at least some of those Fed-pampered buy-the-dippers got their comuppance good and hard today.

Shortly after the open the machines began raging in response to more punk manufacturing data, meaning Powell’s “one and done” slip during the presser had not only been hastily walked back by the Chairman on the spot; now it had been decisively flushed down the Wall Street memory hole by a timely piece of bad news is good news.

So that was the “all clear” for risk-on. By 11:52 AM the Dow was up 306 points and yesterday’s hissy fit over Powell’s presser misfires was about to be all forgiven.

But then during a White House luncheon meeting the Donald got briefed by Mnuchin and Lighthizer about their apparently fruitless trip to Shanghai.

In no time the cheeseburgers were flung aside and those stubby thumbs were pounding out a message on the Donald’s Twitter keyboard that turned into an instant Wall Street barf-bag when it posted at 1:26PM.

Our representatives have just returned from China where they had constructive talks having to do with a future Trade Deal. We thought we had a deal with China three months ago, but sadly, China decided to re-negotiate the deal prior to signing. More recently, China agreed to……buy agricultural product from the U.S. in large quantities, but did not do so. Additionally, my friend President Xi said that he would stop the sale of Fentanyl to the United States – this never happened, and many Americans continue to die! Trade talks are continuing, and……during the talks the U.S. will start, on September 1st, putting a small additional Tariff of 10% on the remaining 300 Billion Dollars of goods and products coming from China into our Country.

Less than an hour later the Dow’s 300 point change was still in tact, but it now had a minus sign on it!

We dwell on this episode, however, not out of sympathy for the punters, who as it happens have now been violently whipsawed two days in a row and are down 615 Dow points for the wear and tear.

They surely deserve that small 2.25% beating and a lot, lot more. And that’s just the point: Under the Fed’s baleful “wealth effects” regime, Wall Street speculators have become absolutely fearless—even as the elephant in the room has starred them in the face over and again.

To wit, today’s Wall Street is the very opposite of a healthy, stable, price-discovering free market. Instead, it’s a creature of the state and utterly dependent upon its timely provision of stimulus, subsidies, puts and backstops.

Yet unlike the inherently competent and beneficent “unseen hand” of the free market, the stubby fingers and warbling voices of the American state today are self-evidently neither competent nor benign.

To the contrary, the Donald is impulsive, capricious, mercurial and malign—to say nothing of being deeply ignorant on all things economic. And Powell is a seriously empty suit who has no facility for double-talk whatsoever—when that is about the only tool the Fed has left.

In short, there isn’t enough imaginable upside left in a stock market that was trading just two days ago at 22.3X earnings (S&P 500) during month #121 of the longest business cycle expansion in history to justify the kind of  extra market risk evident in the chart below. 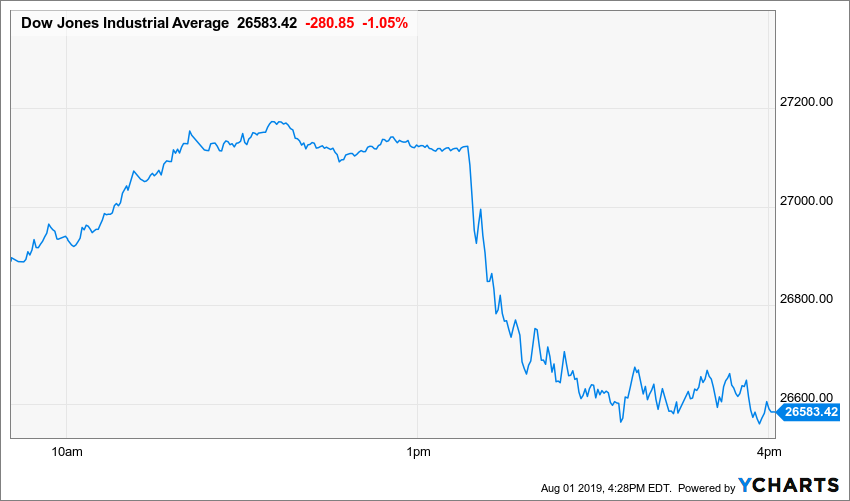 We will leave the substantive stupidity of the Donald’s latest Trade War foray for another day, but do note that there is now $92.5 billion of tariffs on the entire $550 billion of US imports from China. And contrary to simple-minded theories, the impact goes every which-way from Sunday, depending upon supply and demand elasticity in thousands of discreet product markets and supply chains.

In some cases, prices are being passed right through to U.S. consumer where their are