Well, that sure as hell makes sense. Italian bonds are in a rally mode because, apparently, Italy may soon get its 64th paralyzed government since WWII.

Accordingly, the 10-year benchmark yield has now broken below 1.0 % for the first time in history.

Two days ago Matteo Salvini’s Northern League, which is Italy’s strongest political party and is fast rising under the banner of insurgent nationalism, walked out of the coalition government rather than submit to the EU’s fiscal dictates.

But rather than call a new election, as is his prerogative, Italy’s 78 year-old President, Sergio Matterella, has been busy trying to pound a square peg into a round hole.

That is, he has pushed the deeply unpopular, pro-establishment Democrats (PM) to make common cause with the virulently anti-establishment 5-Star party in order to form a new government under the same technocrat Premier, Giuseppe Conte, who couldn’t make the Five Star/League government work, and, who, is a stalking horse for the hated EU bureaucrats in Brussels anyway!

So, yes, that was just the thing to send Italian bond prices soaring! 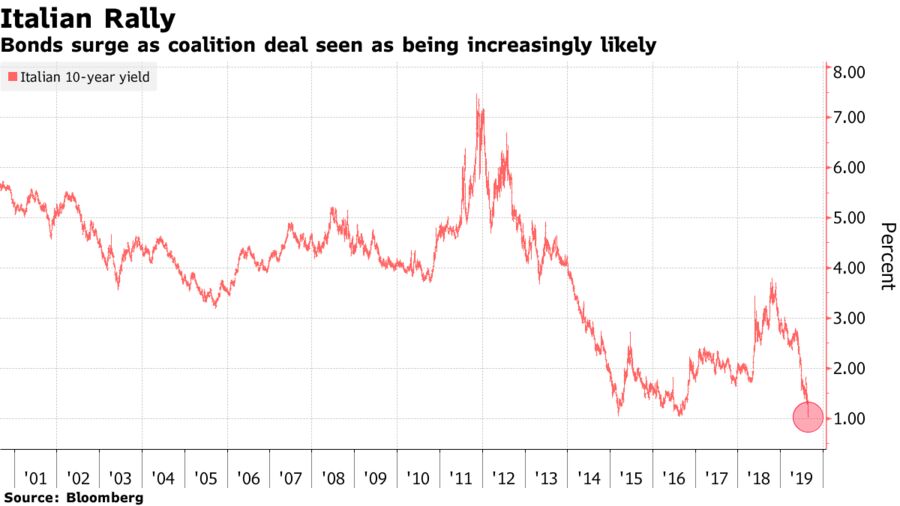 Then again, Italy is an ungovernable fiscal basket case with a rapidly shrinking work force, negative economic growth since 2008 and a public debt to GDP ratio that is off the charts at 133%. It’s the very definition of a sovereign credit that is the opposite of risk free.

Moreover, six years of tepid economic recovery since the crisis of 2012 has been wasted. There has been no reduction at all in Italy’s public debt ratio—-and now the entire European economy is heading back into the  recessionary drink, meaning a renewed surge of budgetary red ink is just around the corner. 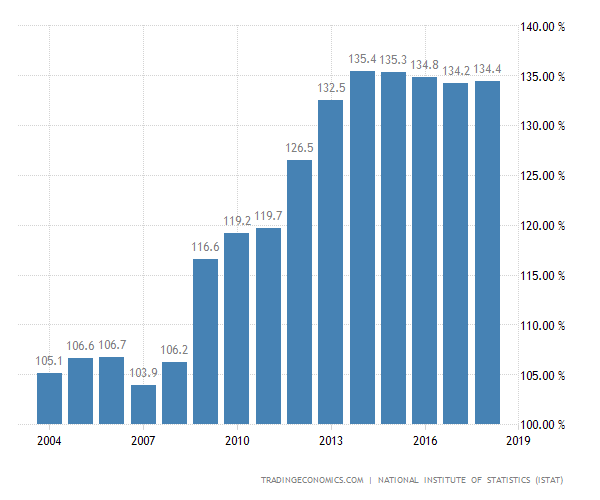 Nor can there be any delusion that Italy might someday grow its way out of this mountainous debt. Notwithstanding eight years of madman Draghi’s massive bond buying and negative interest rates—the greatest Easy Money stimulus in European history—-Italy’s real GDP has not even recovered to its 2008 level.