Stupidity reigns on Wall Street like never before. It is surrounded by every kind of economic headwind and menacing policy and political development imaginable, yet the boys and girls and robo-machines whistle past the graveyard with insouciant disregard.

Can it really be that the early 2019 Powell Pivot on rates and QT and the apparent Trump Punt on the Trade War with the Red Ponzi have removed every single dark cloud from the skies?

To hear the talking heads of bubblevision tell it, of course, that is indeed all it took. And better still, now that the worries on the wall have been erased—the proverbial tsunami of money on the sidelines is fixing to fuel the mother of all stock market melt-ups.

Why Larry Fink himself, the CEO of the world largest asset-gather, $6 trillion Blackrock, said so a few days ago. Mind you, he didn’t say why it should go up even further from its existing nosebleed levels—just that FOMO (fear of missing out) is fixing to unleash another buying stampede in the casino.

Actually, among all people, Larry Fink—-sitting atop $6 trillion of hot money assets (i.e. mostly ETFs and mutual funds that can be dumped on a panicked moment’s notice)—should be shaking in his boots. Blackrock earns less than a scant 30 bps on its mountain of managed assets—-meaning that a plunge in risk asset prices even close to those of 2008-09 and 2000-2001 would wipe out most of its $4 billion of annual earnings.

But Larry Fink is apparently blind to the risk for one simple reason: He is the ultimate bubble rider of his generation, and after 30 years of untold success and wealth accumulation, he long ago shed his youthful knowledge of sound finance and has become progressively more oblivious to the fact that his firm is actually sitting atop the greatest financial bubble in recorded history.

We have some rather unique vantage point on this Fink-As-Generational-Poster-Boy proposition. That’s because as one of the four founding partners of Blackstone right after the last honest market correction in October 1987, when the Dow plunged by 22% in a single day, we all welcomed Fink to our tiny 2,000 square foot office, hoping for the rehabilitation of an exceedingly bright financial innovator.

Still, by the time he arrived at Blackstone in March 1988, the real pivot of modern financial markets had already been made.

That is, rookie Fed Chairman Alan Greenspan had discovered the printing presses in the basement of the Eccles Building during the dark days after the October 19th plunge. He had proceeded to recklessly flood Wall Street with liquidity, thereby thwarting its natural efforts to correct a roaring bull market and expunge a newly developed instrument of pure gambling called “portfolio insurance”.

And then, to avoid any doubt, Greenspan sent his henchmen to Wall Street, where they threatened the money dealers with malice aforethought if they did not stop liquidating assets per the rules of the free market—even as Greenspan’s white shoe thugs demanded that the leading financial houses extend credit to insolvent customers and counter-parties, whether they wanted to or not.

Alas, by 1989 the markets had recovered and the great 30-year bubble of the present era had begun its long, relentless inflation. Accordingly, our new partner, Larry Fink, had recovered his confidence after his near death experience in the bond pits, and proposed that we think big.

That is, market the first mutual fund that would exclusively invest in mortgage backed securities from Fannie Mae, Freddie Mac and the incipient private label market which was then developing. But it was no cakewalk getting Fink’s new $100 million Blackrock mutual fund placed among US and foreign investors.

Even though animal spirits had begun to return and the Wall Street punters were beginning to understand that Greenspan wasn’t Tall Paul Volcker and that the incipient Maestro’s goal was more the sound of acclaim along the Acela Corridor than it was sound money in the financial system, it took a two week road show manned by the entire Team Blackstone to raise the $100 million.

And the team was no slouch. It was led by Blackstone cofounder Pete Peterson, who had been the Chairman of Lehman Brothers, the Commerce Secretary under Nixon, the youngest CEO in America at 29-year of age when he took the helm of Bell & Howell and who possessed the biggest rolodex in the nation prior to the computer age.

It also included Steve Schwarzman, who went on to build Blackstone to its present massive aspect and become the veritable King of Wall Street— as well as Roger Altman, who subsequently founded another Wall Street giant called Evercore, Mark Gallogly, who later founded $25 billion Centerbridge Partners and your editor, as well.

By hook and crook, the $100 million was assembled and by today’s standards its $1 million per year or so of management fees was a veritable rounding error. But that was 1989, when the Fed had a balance sheet of barely $200 billion and the combined balance sheets of all the worlds major central banks amounted to well less than one-half trillion dollars.

Fast forward and you have had undreamed of central bank expansion in the interim—with the Fed’s balance sheet alone peaking at $4.5 trillion a few year back, and total global central bank balance sheets tipping the scales at $25 trillion.

But here’s the thing. Central banks had always manufactured balance sheets out of thin air during the modern period. But it was in the manner of the fabled Woody Hayes Ohio State offense—three yards and a cloud of dust.

That is to say, balance sheets crept higher by about 3-4% per year, meaning that central bank balance sheets remained a tiny fraction of GDP (2-5%)—while  modest interventions in the money market exerted an exceedingly light touch on the pricing of money, debt and risk assets.

Needless to say, that all changed after Bubbles Greenspan took the helm at the Fed in August 1987 and proceeded to explode the Fed’s balance sheet by 4X over the 19 years of his reign, and more importantly force the rest of the world’s central banks to follow suit.

Accordingly, during the 27 years between 1987 and 2014, the Fed’s balance sheet grew at 12.2% per annum, while during the last thirty years, the combined central bank balance sheets of the world have grown at 14% per annum.

That’s completely nuts and it did cause a massive inflation. But it was an inflation in the price of financial assets, not goods and services and for a very simple reason.

To wit, the world have never been labor constrained—-the subsistence villages of the planet have always had plenty of incipient industrial workers. But it was inherently capital constrained because until the last 30 years, the generation of new capital required increases in private savings, and countless acts of deferred gratification from current income.

No longer–at least during the current era of Bubble Finance. The central banks have so systematically repressed the carry cost of debt and inflated the value of equity shares that there has occurred an extended run of massive over-investment and malinvestment. Consequently, productive assets have been funded with the cheap capital printed by central banks or confected by front-running speculators in hypothecated debt and equity securities.

To be sure, this vast financial deformation fostered a false prosperity–embodied in the Red Ponzi in its most exaggerated form. More crucially, it also extinguished any tendencies toward goods and services inflation by drafting upwards of a billion workers from the rice paddies of Asia and subsistence villages elsewhere into the globally traded markets for commodities, industrial goods and internet-enabled services, too.

At length, therefore, the artificially low goods and services inflation fostered by the central banks became the excuse for even more monetary promiscuity. And, in turn, the players in the money and capital markets, which steadily morphed into gambling casinos, got caught up in this Great Deformation and eventually lost all track of its rotten foundation.

That brings us back to our post boy for the last 30-years of Bubble Finance. In that very span, Blackrock’s $100 million of assets under management rocketed to $6 trillion, but while as smart as the next guy, Larry Fink is no financial rocket scientist.

He’s a rocket rider. After all, Blackrock’s asset base has grown by 60,000X since the days in 1987 when Larry Fink was nearly put out of business for good. 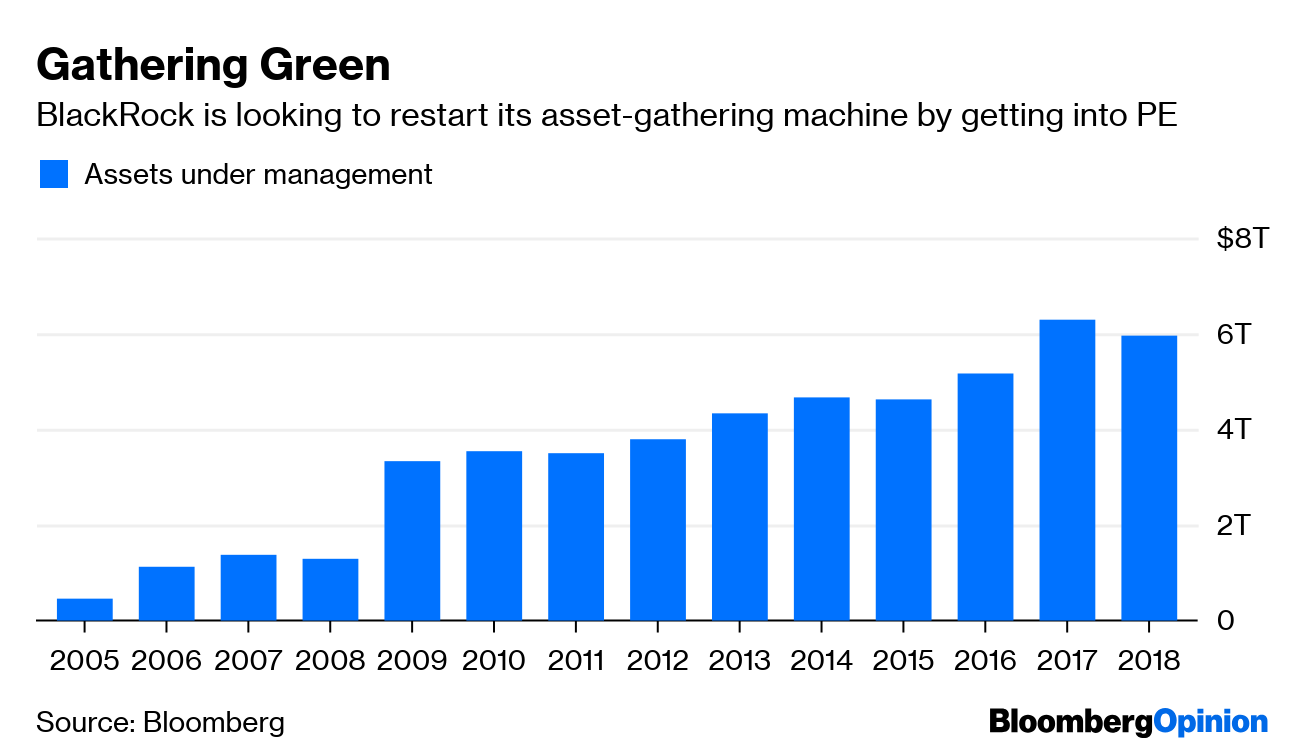 Needless to say, Larry Fink is just the poster boy for a generation of traders and speculators who have been riding the 60,000X rocket for so long that they cannot even see the financial insanity that lies all around them.

We intend to provide some chapter and verse tomorrow on leading examples now in the news cycle such as Facebook, Zoom and Chipotle, among numerous others. But suffice it here to consider the case of Amazon, which has been leading the insane 25%-35% charge back up the hill by the main stock indices during the 84 trading says since the New Year eve bottom.

To remind, Amazon’s market cap is now nearly back to its all-time high at $945 billion. That represents an absurd 95X its LTM net income of $10 billion, and even more egregious 74X its LTM operating free cash flow of $12.8 billion.

Moreover, nearly 60% of Amazon’s operating income during 2018 was earned by its cloud business (AWS), which accounted for just 12% of its $233 billion in sales. The latter has nothing to do with is core $207 billon e-commerce business, and actually represents a non-proprietary, low-return, capital intensive investment in vast server farms—-which is to say, the dumb real estate of the digital economy.

In essence Amazon is a runaway engine of vast inefficiency, malinvestment and main street economic destruction enabled by the false incentives to management afforded by its incredible over-valuation.

But like Larry Fink, the bubble riders do not see the  absurdity of the Amazon situation because 30 years of relentless inflation has destroyed the working mechanisms of the money and capital markets.

Indeed, even MarketWatch caught a glimmer of that in today’s market story—finding it somewhat perplexing that all 45 equity analysts who cover AMZN rate it a buy.

All 45 sell-side analysts who cover Amazon.com rate the stock a “buy.” That is incredible, considering the shares trade for about 71 times the forward consensus earnings estimate, more than four times that of the benchmark S&P 500 Index.

Maybe that’s also why the latest IPO shooting star, Zoom, traded at a market cap of $17.7 billion on its Tuesday close. That happens to represent 54X its $331 million of revenue and 2,330X its $7.6 million of net income. And, yes, that’s two-thousand and thirty times it earnings.

Nor is this only about newbies which are being given incredible benefits of the doubt—even though that bet is belied by Amazon itself, which is now 30 years old and it still earns virtually nothing on its core e-commerce business.

Tonight Chipotle reported LTM net income of $205 million for the period ended in March 2019. That is notable because way back in 2011 Chipotle earned $215 million!

Yet that did not stop the momo monkeys from bidding the stock up to a market cap of $20 billion–meaning that it is being valued at 100X net income and more than 55X operating free cash flow.

That’s right. This is a burrito restaurant chain that has gone nowhere for eight years because it has saturated the country with stores, has mucho competition, is facing rising labor and food costs and has been prone to multiple episodes of literally poisoning its customers with tainted food.

No matter. Larry Fink says a goodly market melt-up is just around the corner.