The 10-year UST yield hit 1.03% this AM, and that’s downright ludicrous. After all, the core CPI inflation rate posted at 2.27% in January, meaning that the most fiscally profligate government in modern times gets to borrow long-term funds at negative 124 basis points in real terms.

Obviously, something is haywire, but it’s not what the so-called bond bulls want you to believe. Namely, that nearly return-free yields on government debt is all very rational because in their wisdom bond “investors” see a weak economy down the road and are therefore discounting the next recession.

We don’t take issue with the recession call, but that’s not why there is $16 trillion in bonds around the world currently trading at negative nominal yields or why the benchmark UST is almost there with a nominal yield that is barely holding on to an integer.

What you have here is the financial equivalent of caribou soccer: It’s what six-year old boys and girls do as the chase the little white and black ball around the field in a rambunctious pack without any regard to strategy or team play.

In the case at hand, global central banks have fostered so much restless speculative capital that when the scoreboard flashes “risk off”, the speculators pile into USTs and other sovereigns as a nearly cost-free place to park (they buy the bonds on 95% repo) until the ball heads back toward the “risk-on” end of the field.

The fact is, recessions (or their prospect) do not cause negative yields: Nothing does except central banks irrationally bidding for debt—along with front-runners who jump on for a quick price gain from what are supposed to be fixed price instruments bearing a modest yield.

For want of doubt, here is how long-term UST’s behaved at recession points during the era before Keynesian central banking systematically falsified bond pricing.

In short, today’s hideously low bond yields are not due to low-inflation or the recession lurking just around the bend. They are the handiwork of central bank financial repression run amuck.

This happens in defiance of the common sense laws of economics under which investors require a meaningful margin over and above inflation to compensate for risk and the time value of their savings.

Moreover, today’s virtually non-existent bond yields are not merely a case of too bad for the gray-haired ladies and others who do not have the requisite chest hair to chase after the big money in equities and high yield.

In fact, today’s 1.03% yield on the 10-year UST, and the negative -0.64% and -0.32% yields on the German and French counter-parts, respectively, are symptomatic of global asset prices that have gone tilt under the heavy-handed ministrations of the central banks. That financial asset pricing has been completely decoupled from economic and financial fundamentals is almost hilariously evident in the case of the socialist nirvana of France, where investors are now paying its government the aforementioned -0.34% per annum for the privilege of loaning it money.

As indicated by the blue line in the chart, the French government debt to GDP ratio has soared from 20% to nearly 100% since 1980; and its spending to GDP ratio (dotted line) has risen from a debilitating 46% of national income in 1980 to a positively crushing 56% at present.

Needless to say, the absurd sub-zero pricing of the French 10-year bond today has absolutely nothing to do with honest price discovery or the fundamentals of France’s tired economy and profligate public finances. Instead, it is just another data point on the scale of financial mayhem fostered by the ECB and its fellow-traveling central banks around the world.

Of course, the French 10-year bond yield is just a poster boy. It’s a reminder that the entire playing field in the global financial system is riddled with central bank-fueled irrationality, speculation, instability and unsustainability.

To paraphrase, Ralph Nader, it is also Unsafe to Trade at any speed. Today’s madcap swing in the stock index, for example, traversed a stunning 1,850 Dow points between the overnight lows triggered by China’s catastrophic PMIs for February (see below) and the closing highs generated by the “stimulus” cavalry is coming hopium.

Here’s the thing. Capitalist prosperity and stability requires efficient money and capital markets to intermediate the flow of savings into productive investment. But when the world’s $90 trillion bond market has become a speculative hall of mirrors and the $85 billion equity market has morphed into the kind of machine-driven casino evident in the chart below, all bets are off.

Sustainable growth will positively not happen under the bad money regime the central bankers have foisted on the world. The scramble for yield by the world’s money managers, in particular, is causing zombie companies to remain artificially alive, start-ups to waste prodigious amounts of capital chasing will-o-wisps and the C-suites of the corporate world to function as stock trading rooms and financial engineering joints.

And yet the financial malignancy has set-in so deep that the response of politicians and speculators alike to any challenge like the Covid-19 fostered fracturing of global supply chains is to urgently call for the injection of even more monetary poison into the system.

Yet today’s egregious roller-coaster may also be fair warning that the end of the 30-year fantasy driven by Keynesian central bankers is near. The amplitude and speed of price change is happening with such violence that it is only a matter of time before a 2008-style meltdown is triggered by the mutant arrangements which have metastasized in the financial markets.

In fact, there are now in excess as $7 trillion of passive funds in ETFs, indexed funds and trend-following trading vehicles that could be sucked into a self-fueling chain reaction of selling, which out-of-dry-powder central banks and government fiscal authorities would be powerless to reverse.

Indeed, these coiled springs of speculative energy are undoubtedly the reason why the current 10% correction happened in record time of just six days. Compared to the history of 25 such 10% or better stock market drawdowns since 1946, this one is literally off the charts. 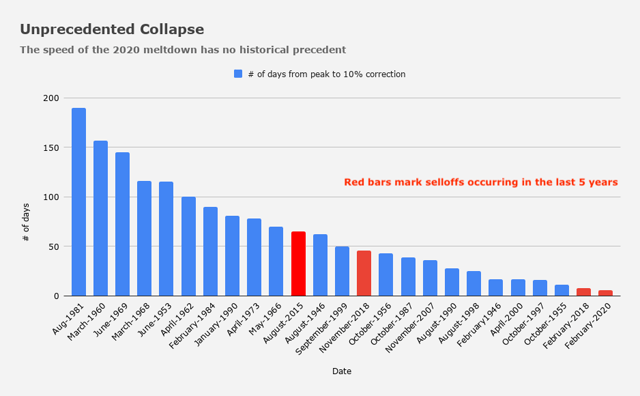 So for our money, the jig is up. It is now only a matter of weeks or months before the current bubble-ridden market goes down for the count.

As we told Neil Cavuto on Fox Business today, America’s Fake Recovery, which was fueled by soaring debt, ultra-cheap money and rampant Wall Street speculation, will be laid low by the Covid-19. That’s because the latter will fracture and shutdown global supply chains, which, in turn, will dry up cash flows to a JIT (just-in-time) hand-to-mouth economy that is too fragile to absorb the shock.

The debt of US businesses (purple line), for example, has soared from $10 trillion on the eve of the financial crisis to $16 trillion now or by 60%. But that eruption of debt did not remotely generate an commensurate increase in real business activity and cash flows.

The peak-to-peak growth rate of business value added during the current debt-fueled recovery, in fact, was only a fraction of that for prior cycles. On an annualized basis–

The implication is straight forward. The $6 trillion eruption of business debt since Q4 2007 did not fuel enhanced growth or production capacity, but just the opposite.

Namely, a nonstop spree of financial engineering that has badly impaired balance sheets and US businesses capacity to absorb external shocks.  So when the Covid-19 disruption of supply chains sharply diminishes cash flows in the months ahead, the rate of bankruptcy filings will soar—along with their inherent downstream contractionary effects. As we told Cavuto, Covid-19 is the neutron bomb of economics. It apparently leaves 98% of infected patients standing, but causes a massive cratering of daily economic life when public health authorities attempt to stop its ultra-high rates of propagation and contagion.

Accordingly, in very short order once public health containment and quarantine measures commence in earnest,, workers get separated from their jobs, consumers from the shopping malls, diners from the restaurants, travelers from airlines, hotels and resorts.

All these interrupted cash flows will compound as they work their way thru the system. But with interest rates already at an absurd 1.05% on the 10-year UST, more money pumping by the Fed will do absolutely nothing to rescue a fragile, debt-ridden economy being exposed to this Mother-of-all-Supply Side Shocks.

This weekend’s shocking PMI’s from China were surely a bell ringer for the cascade of Supply Side Shocks coming down the pike of the global supply chains. China’s total trade turnover amounts to $4.5 trillion out of the current $20 trillion of global trade volume.

But the impact of its production shutdown will be far greater than its 23% share of the total. That’s because so-called globalization has turned global trade flows into a massive spaghetti bowl of infinitely crisscrossing streams of raw materials, processed materials, parts, components, sub-systems and pre-fabricated assembly kits.

Yet shortages of any of these items can have sweeping and compounding multiplier effects downstream. Those disruptive cascades are already evident in automotive, electronics and pharmaceutical manufactures, but will soon ricochet through the entire global economy—including so-called tradable services of $5 trillion which are heavily dominated by shipping, logistics and warehousing, air travel, tourism and lodging

In any event, China’s National Bureau of Statistics (NBS) reported late Friday that its manufacturing PMI was 35.7 for February 2020, which is significantly lower than the deep bottom at 38.8 reported in November 2008.

Under the hood, the subcomponent of the index were equally foreboding. Thus, the production index crashed to 27.8 in February from 51.3 in January (largely pre-coronavirus). Likewise, new orders plunged to 29.3 while new export orders fell to 28.7 (from 48.7 in January).

The latter component had been 50 in January and was already sliding backward.  What that means, of course, is that in the months ahead, finished goods exports from China will decline drastically, while the flow of materials, parts and sub-assemblies will wreak not yet fathomable havoc with downstream users in the US and elsewhere.

The weekend data also showed that overall economic activity in the Red Ponzi has ground to a halt. That’s evident in the plunge in the non-manufacturing PMI from 54.1 in January to a literally unimaginable 29.6 in February.

Indeed, the non-manufacturing PMI had never been below 50 before, the worst having been 50.8 in December 2008. So what this essentially means is that commerce has virtually stopped.

The economic neutron bomb of Covid-19 is essentially separating the population from the economy, and that’s where the real Red Ponzi disruption will take its real toll.

To wit, China is buried in $44 trillion of debt and daisy chains of speculation that would make the Roaring Twenties in the US seem boring by comparison.

So when these speculations start unraveling and ricocheting through the economy, Emperor Xi will not be able to run the printing presses fast enough to contain the meltdown, nor jail enough “enemies of the people” to stop the implosion of what has always been an unsustainable freak of economic history.

To be sure, the robo-machines and the day traders were buying the dips with malice aforethought today. But that only underscores the danger at hand.

The central bankers have essentially blinded and corrupted the delicate financial clockwork that lies at the center of the global economy.

This is something totally new under the sun. And so is the turbulent reckoning that lies dead ahead.