Today’s insipid bubblevision coverage of the Bernanke/Paulson/Geithner 10th anniversary victory tour put us in mind of another trio, which was also famous for their relentless incompetence. That is to say, had Curly, Larry and Moe been in charge at the time of the Lehman meltdown we would have all been far better off.

The real 3 Stooges would have predictably whirled around frenetically, pointing in all directions on the compass. But at the end of the day they would have been incapable of mustering any organized effort to stop Mr. Market’s belated cleansing of the financially filthy Augean Stables of Wall Street.

So instead of destructive bailouts we would have had healthy bankruptcies among the financial highflyers who precipitated the crisis. Along with Lehman, the rooster of Chapter 11 filers in the fall of 2008 would have included AIG, Goldman, Morgan Stanley, Merrill Lynch, the Citigroup holding company and a few other gunslingers who inhabited the canyons of Wall Street.

But there would have been no long lasting financial crisis or contagion spilling-over to the commercial banking system and the main street economy. That entire Armeggedon scenario was a fiction arising from what we have called the Blackberry Panic, which broke out when Hank Paulson and his posse of Wall Street sharpies at the US Treasury Department saw Goldman’s stock plunging hour after hour and concluded that the entire financial system was imploding into a black hole.

It wasn’t. Not even close. For instance, AIG’s holding company would have been quickly liquidated in Chapter 7, but state insurance regulators across America would have seized its insurance subsidiaries and taken control of the embedded assets in order to protect policy-holders and annuitants.

What that means is that no everyday Americans would have faced unpaid insurance claims or loss of monthly annuity payments. That’s because the insurance subsidiaries were well capitalized, and protected by state mandated dividend-stoppers that prevented the gamblers running AIG’s holding company from raiding them to pay-off claims on the bogus insurance on securitized mortgages they had written.

The latter was known as CDS  (credit default swaps) and had been sold to Wall Street and European banks by a London-based holding company operation that had few assets except for the stock of AIG’s insurance subsidiaries. And that was the rub.

AIG had an AAA credit rating at the corporate level, but the $800 billion of prime-rated assets (stocks, bonds and real estate) in its insurance companies were not available to the holding company to meet margin calls and pay-off claims when the underlying subprime based securitized mortgages and CDOs (pools of securitized mortgages) began to experience soaring defaults.

Needless to say, there was condign justice in that situation. The whole purpose of CDS was to turn piles of dodgy subprime securities into risk-free investments via the insurance “wraps” that AAA-rated AIG sold to investors for a pittance of a premium.

In effect, down in the canyons of Wall Street one set of big boys was picking up nickels in front of a steamroller (the AIG holding company) and another set was buying what was essentially bogus loss insurance in order to minimize their capital requirements. Accordingly, they both deserved their respective fates—bankruptcy for the former and worthless insurance claims for the latter.

As it turned out, however, the geniuses in the actual 3 Stooges photo below ponied up more than $60 billion of taxpayer money via the AIG bailout which went to Goldman Sachs ($19 billion), Merrill Lynch ($15 billion) and a passel of quasi-state banks in socialist Europe to make good on AIG’s bogus CDS insurance.

But here’s the thing. Those CDS insurance losses did not implicate the commercial banking system on main street or the tens of millions of insured depositors who depended upon them. Almost all of the CDS-insured subprime paper was held by trading desks, hedge funds, bond mutual funds and big bank investment departments.

Had the CDS losses been allowed their warranted fate on the free market, Wall Street earnings and bonuses would have been whacked for a quarter or two, and a few socialist governments of Europe would have undoubtedly coughed up subsidies to their state champions like BNP-Paribas, Credit Agricole and Deutsche Bank. But that would have been it, and something more.

To wit, had the CDS losses been permitted to run their course, and had the illiquid and insolvent Wall Street investment banks been left to the Chapter 11 courts what would have followed is a reorganized industry carved out of the parts and pieces of the old order. That is, there would have emerged a new set of M&A boutiques, asset managers, underwriting specialists and sales and trading operations to perform any legitimate business that the American economy required of Wall Street.

To be sure, the corporate shells and cultures of Goldman, Morgan Stanley and the rest would have been extinguished with Lehman. But the chastened survivors, who would have lost their financial lunch on the worthless stock of their former employers, would have re-made a far more balanced, healthy and productive Wall Street than the rank casino fostered by the bailouts and 10-years of egregious money-pumping by the real 3 Stooges and their heirs and assigns.

Left-wing critics of the bailouts, of course, are right about the substance of the matter, but frequently they get side-tracked in lamenting that no Wall Street executives or high rollers went to jail.

But that’s not really the true evil of the bailouts and central bank money flood that followed the Lehman collapse exactly 10-years ago. The chart below shows the more important sin—-$168 billion of combined Goldman/Morgan Stanley market cap—much of it held by insiders—-that never should have survived the gambling sprees, the drastic wholesale funding mismatches and the toxic securitized mortgage chemistry labs that led up to the financial crisis.

In the days after the Lehman filing, Goldman’s market cap had plunged to just $15 billion and Morgan Stanley’s to single digit billions, and both should have gone all the way to zero. That’s because both were insolvent owing to the fact that each had funded a $1 trillion balance sheet with a thin slice of equity and term debt, and massive amounts of cheap wholesale funding that had to be rolled daily and weekly; and which had predictably evaporated in the midst of the crisis.

But of course it did. That’s why prudent financial mangers were never supposed to fund trading desks and balance sheets loaded with illiquid and risky assets—securitized mortgages, CDOs, commercial real estate securities, corporate junk bonds, EM securities etc—-with ultra-short term paper just because it was cheap and made for lucrative profit spreads.

That had been the obvious lesson of Bear Stearns six months earlier. In the days before it suddenly went insolvent it was rolling over more than $60 billion of overnight paper each and every morning.

Yet Wall Street circa September 15, 2008 was simply Bear Stearns writ large, and therefore needed to be dispatched similarly with a full dose of the free market’s malice aforethought. 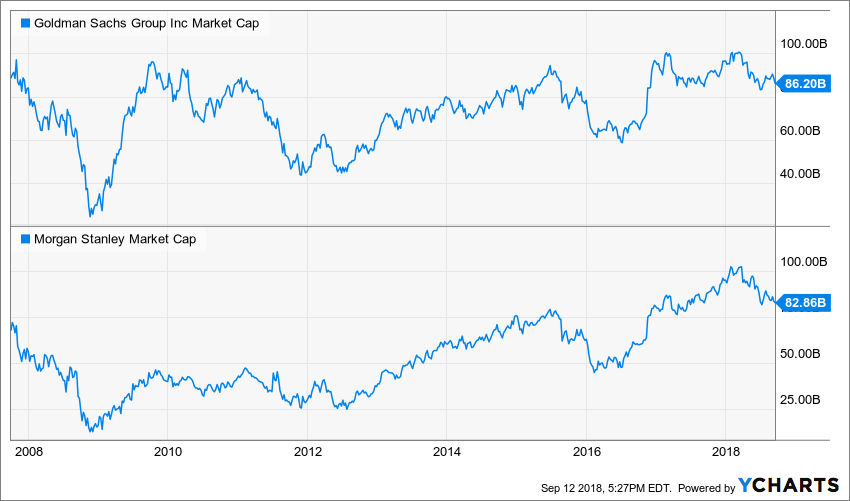 To this day, of course, the entire ill-fated contretemps of the post-Lehman era has been justified by the unexamined myth that the Wall Street contagion was about to spill-over onto main street, and take down the entire retail banking system of America.

In fact, the then $11.6 trillion balance sheets of the nation’s commercial banks and thrifts were never in danger. There were no “runs” on these 8,000 institutions save for a few isolated cases like Indy Mac, Washington Mutual and Wachovia, which were wannabe Wall Street operators in any case.

The reason is simple: The overwhelming bulk of toxic mortgage assets were on Wall Street and spread around the globe, but were not in the retail banking system. Only $200 billion or 1.7% of commercial bank assets consisted of private-label mortgage-backed securities of the type originated by the Wall Street securitization machines and which were plummeting in value.

By contrast, the retail banks held over $1 trillion of GSE mortgage-backed securities, which were essentially guaranteed by Uncle Sam; and also $2.1 trillion of prime quality whole mortgage loans, where default rates were minimal.

In Part 2 we will trace how the Bernanke/Paulson/Geithner folly of September 2008 has essentially destroyed honest price discovery on Wall Street. So doing, it has transformed the latter into a casino for leveraged speculation on secondary paper rather than a forum for raising long-term capital, and for the striking of market clearing prices among suppliers and demanders of money and capital.

But the heart of the matter starts in the chart below. In their utterly misguided desire to stop the cleansing losses that were triggered by the Lehman bankruptcy, the Fed and Washington policy makers essentially eliminated money market interest rates entirely for more than eight years.

Never in history had that happened, and never before had such a reckless invitation to relentless carry trade speculation been issued by the central bank.

Consequently, the financial system is now booby-trapped with mispriced risk, hidden leverage and egregious inflation of assets values across the entire spectrum of financial instruments. It amounts to a bubble like no other in financial history.

After all, when you combine human greed, the moral hazard implanted by the bailouts of September 2008, endless free money and the cult of an ever rising stock market, why would you expect otherwise?