Make that 41-years in terms of highest inflation readings. Here we are talking about the November PPI for finished goods. Today’s report happened to put us firmly in double-digit land at 13.6% year over year—a reading that beat all the monthly prints back through the 12.9% posting of October 1980.

So what we have is a four decade high in the pipeline of producer prices, yet the nincompoop who sits in the big chair at the Fed only gave up the “transitory” canard three weeks ago. All along these paint-by-the-numbers fools were arguing that it’s just “base effect”, which will quickly wash-out when the inflation dip of April-June 2020 is anniverseried.

But no cigar. All anyone needed to do was track the annualized gain in the two-year stack and it would have been evident that underlying inflation was reviving up compared to where inflation stood back in 2019 before the Covid-Lockdown dislocations in the data.

In fact, here is the data for the two-year stack of the PPI for finished goods, going back to the print that embodied the April 2020 shock point. If you couldn’t see today’s number coming down the pike you simply weren’t paying attention.

In a word, the PPI inflation rate has been running at more than 3% per annum for 6-months now, yet JayPo and his merry band of money-printers just couldn’t see it coming. Staggering incompetence, that! And, no, the above is not just an aberration of Lockdown America stuffed to the gills with stimmies and hitting the Amazon “buy” key in the manner of morphine-addicted lab rats in a science experiment. According to the November PPI report, there is plenty of inflation in the services pipeline, as well.

In fact, the 7.1% Y/Y gain was truly off the charts for the PPI services index, which has been published since November 2009; and which averaged just 1.77% per annum between then and November 2019.

Again, this surge in the PPI for services isn’t a “base effect”, either. If we go back to comparable months in 2019 as a baseline, the rate of advance has been accelerating dramatically since last spring and at 4.29% per annum in November was double the 2.09% rate posted in March.

In short, the finished goods components of the wholesale pipeline are rising at nearly 6% per annum versus the pre-Covid 2019 level and services components are now running above 4% and accelerating rapidly. Can commensurate continued gains in the dowstream CPI be far behind?

More importantly, can the Fed avoid a dramatic and shocking shift to rate hikes and a degree of monetary restraint not seen since 2005-2006?

Surely, the Eccles Building denizens will exhaust themselves looking for excuses to avoid the carnage in the complacent, clueless casino that their misbegotten policies have fostered. But when push-comes-to-shove they will have no choice except to shut down their printing presses (i.e. QE) and permit the battered and bruised interest rates across the entire maturity spectrum to get up off the mat and act like, well, a quasi-honest cost of money. Our confidence that the Fed heads are about to be taken out back to the woodshed for a beating by the politicians and the popular media was reinforced by many of the internals in today’s PPI report. Most crucially, the component for finished consumer foods clocked in with a 42-year high.

That’s right. Not since April 1979 when this component printed at 10.7% on a Y/Y basis has the PPI for consumer foods risen at the rates of the last two months. And needless to say, these surging prices are heading for a grocery store near blue state and red state voters alike. Again, there should have been no mystery about what was coming down the pike. In fact, if you back up one more stage in the production pipeline to farm level pricing for foods, you can see that on a Y/Y basis we are at 52-year highs going back to the summer and fall of 1973 and have been there since last spring.

As it happens, we actually do recall the commotion of 1973 and the lessons we learned about the virtues of the free market as a young aide on Capitol Hill.

At Nixon’s command, Fed Chairman Arthur Burns had pumped money like there was no tomorrow in 1972 in order to insure a Nixon landslide (the poor thing would have felt unloved with anything less). When inflation exploded shortly thereafter, the alleged Republican Administration threw every kind of wage, price, interest and rent control they could think of at the economy—all to no avail.

In fact, one of our distinct recollections was the distortion in farm prices we had to learn about as a result of being a legislative assistant to a farm-district Congressman from Illinois. Since there were no controls on the price of soybeans, corn, beef, hogs and the rest in the overseas export markets, domestic supply was sucked into foreign markets as if hit by a whirlwind.

So here we are in 2021 with farm prices having gone through a once-in-a-half-century surge, yet the Fed is debating even as we write about whether its time to “retire” the absurdity of zero interest rates. Behind the curve doesn’t even remotely describe the trap these geniuses have put themselves in. What is different this time, however, is that the giant monetary policy errors of the 1970s have now become universal—every single major central bank in the world has actually been racing the Fed to the bottom. That’s why we don’t think the dollar is about to collapse in the manner that some unreconstructed monetarist imagine to be just around the corner.

To be sure, the Fed’s policy is enormously destructive owing to the massive inflation of financial assets its has fueled—even before the present round of surging goods and services prices—and the resulting under-investment and malinvestment it has caused. That is to say, domestic growth and living standards are going to suffer mightily in the years ahead, even if the dollar’s exchange rate manages to rise against the Euro, yen, pound and yuan in the cleanest dirty shirt in the laundry fashion.

Still, for further amplification of the screaming anomaly we teed up in Part 1—the 1257 basis point deterioration in the real yield of the 10-year UST since mid-1982—consider what’s been happening to another of the dirtier shirts in the currency laundry. According to new data, wholesale prices even in inflation-allergic Germany are now raging off the charts, and are up by more than 16% on a year-over-year basis. 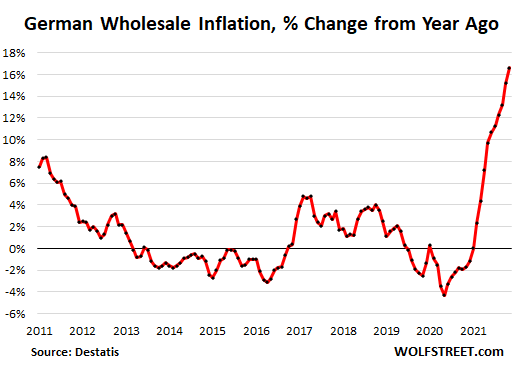 Given that the ECB is dominated by Keynesian lunatics even more wacky than those at the Fed, it is not surprising therefore that the real yield on the benchmark German 10-year bond has been eviscerated. It now stands at -6.35% or even deeper under water than the -5.45% reading on the 10-year UST we mentioned in Part 1.

But here’s the thing. The US Treasury and German bond markets are by far the most important, largest and most liquid sovereign debt markets in the world, but thanks to massive central bank bond buying both are now absurdly mis-priced. That is to say, not just a little bit outside of the boundaries of rationality and sustainability, but plumb off the deep end.

Indeed, as shown in the chart below the real yield on the German bond ranged in the +2-4% range during the first decade of the single currency. But after Madman Mario Draghi pronounced the “whatever it takes” doctrine in July 2012 the primary European government bond has become a pinata for the money-printers; and after the Covid-Lockdowns hit in March 2020, all semblance of rationality has evaporated. 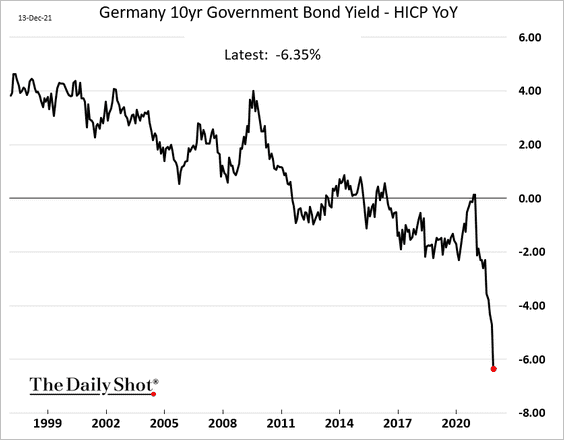 For want of doubt as to the cause—which is most definitely not the stupid BubbleVision mantra that rational traders in the bond pits are discounting a weak economic future—consider the chart below. Since August 2019, the Fed’s balance sheet (red line) has grown by $5 trillion and the ECB’s balance sheet (blue line) has ripped higher by Euro 4 trillion.

Stated in common USDs at $1.15 per Euro, the combined ECB/Fed balance sheet stood at $9.17 trillion in August 2019 and now totals $18.7 trillion. In barely 27 months, therefore, the madmen in Washington DC and Frankfurt have scooped up $9.5 trillion of government and related bonds, which amounts to more money-printing than in the entire history of the world’s two most important central banks until that point in time.

So there is a reason that every bond on the global markets and every security which prices off from them–including the entire equity market but especially the high-flying big cap tech stocks—-is radically mis-priced, egregiously over-valued and a colossal accident waiting to happen: Namely, in their race to the bottom, the central banks of the world have set-up the financial markets for the Mother-Of-All-Implosions.

It is only a matter of time until the central banks loose their footing and shed their last remaining dollops of credibility.

Then, well, Katie-bar-the-door will hardly be the word for it. But the thing to know as we wait for the likes of Jay Powell to choke on his own foot in the mouth—-“retiring” the word “transitory” was just a warm-up—is that the markets have never been more fragile, even back at the peak of the dotcom insanity in March 2000.

The chart below summarizes the current level of concentration in the last few big cap names standing as well as any. In the case of the NASDAQ Composite which includes 3,605 stocks, the average stock is now 39% below its respective all-time high, while the overall index itself is only down by 3.5%.

Can you say Apple and Microsoft?

As we will amplify in Part 3, these are admittedly among the greatest value creators in corporate history, and, alas, also among the most absurdly over-valued.

Profitless high flyers like Tesla may be among the symptoms of a stock market run amok by the money-printers. But Apple and Microsoft are the speculators’ hotels where the punters have gathered for the Gotterdammerung which lies ahead. 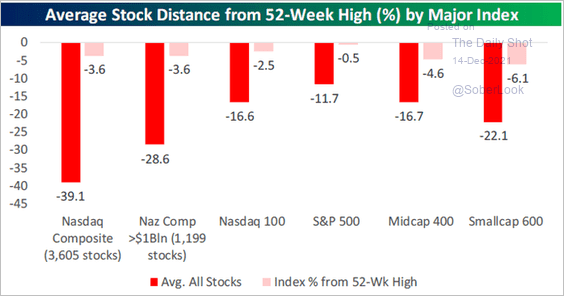