The Donald took to some bragging during yesterday’s annual tax filing moment—-assuring America’s oppressed taxpayers that happier times beckon. In fact, he insinuated that MAGA is not just a slogan. By his lights, apparently, we are already living the dream. To wit:

On this Tax Day, America is strong and roaring back. Paychecks are climbing. Tax rates are going down. Businesses are investing in our great country. And most important, the American people are winning.

So our purpose in this multi-part series is to beg to differ. Profoundly.

The Donald is not leading America to the promised land. Instead, he’s leading it to war abroad, fiscal and economic calamity at home and a crisis of governance that pales Watergate into insignificance.

To be sure, these baleful outcomes were baked into the cake when Trump took the oath 15 months ago, and there was never any rational reason to think he could reverse the tide.

As we have said from the beginning, the Donald’s historic role is to function as the Great Disrupter—tying the system in knots and causing the malefic Washington/Wall Street consensus to become irreparably fractured and thoroughly discredited.

But he can not possibly fix anything because he has no agenda, no mandate and no capacity whatsoever to lead.

His domestic program boils down to crude protectionism, nasty xenophobia and epic fiscal profligacy; his foreign policy is a function of who he talks to last among his worsening team of failed generals and bloody-minded neocons; and his notion of White House leadership consists, self-evidently, of early morning tweet-storms from the East Wing Residence.

The single thing that the mainstream media acknowledges as a “success” is the Christmas Eve tax cut, but that will soon prove to be the most counterproductive and irresponsible fiscal policy action in modern history–or even ever.

After all, the Donald inherited a real bad boy—a $700 billion deficit for the upcoming fiscal year (FY 2019). But the King of Debt was nonplussed, electing to pile on $300 billion of tax cuts ($285  billion revenue loss plus interest) for next year alone.

Shortly thereafter, of course, he kept the government lights on by signing the Horribus appropriations bill. So doing, he traded $63 billion of higher domestic spending and more than $100 billion of unfinanced disaster relief for $80 billion of added defense money.

In all, the Trumpite/GOP has pushed the coming year’s borrowing requirement toward $1.2 trillion. This means, in turn, that the bond pits will be flooded with $1.8 trillion of “homeless” treasury paper after accounting for $600 billion of the Fed’s QT bond-dumping program.

Here’s the thing. No one has ever tried—or even contemplated—financing $1.8 trillion or 8.8% of GDP at the tippy-top of a business cycle that will enter record territory (124 months) before FY 2019 is over.

Indeed, the very idea of it is pure madness and it will shatter the entire Bubble Finance order before it is done.

By way of historical comparison, the Federal deficit was $160 billion or 1.1% of GDP at the top of the last cycle (FY 2007) and the Fed was still buying the public debt, not dumping it.

In fact, it bought $15 billion of Treasury paper that year, meaning the net burden in the bond pits was $145 billion or 1.o% of GDP.

So what looms just ahead is a flood of government paper into the bond pits which will be 9X bigger (relative to GDP) than was the case at the last cycle peak on the eve of the financial crisis.

Besides, the Chinese were still buying Treasury paper hand-over-fist back then. By contrast, among the many wars the Donald has on his mind is the trade war with the Red Ponzi that has now gone into full tit-for-tat. This week has already generated a 179% Chinese levy on US sorghum and a pending US levy on steel automotive wheels, and apparently they are just getting warmed up.

On that score, we have no way of knowing whether the Donald’s dictator friend, Xi Jinping, will deliberately dump any of his $1.5 trillion hoard of US treasuries (when you count what is in nominee accounts in the Cayman Island, Belgium etc) as the next step of the trade war.

But it actually doesn’t matter what the motivation or trade war strategy is in Beijing: The overwhelming odds are that it will need to sell, not buy or hold, US treasuries in the years ahead in order to counteract capital flight.

Indeed, as Mr. Xi wrestles with his $40 trillion debt bomb and the towers of speculation that have built up inside the Red Ponzi, he may well move to aggressively plug the foreign exchange loopholes and fill the jails with “enemies of the people”.

But that will only further motivate the flight of capital to places where the Red Emperor cannot seize it.

The same is true of the eurozone. The ECB will be out of the QE business by the end of this year, and into a German-led sound money pivot to QT by the end of 2019. Since the global sovereign bond markets are fungible and arbitraged, that shift too will reduce the central bank uptake of  government bonds.

Indeed, the contrast between the ECB’s balance sheet at the least peak in 2007 and the present is startling. Back then it was $1.5 trillion and had ample headroom above; today it has ballooned to $5.5 trillion and has nowhere to go except smaller.

In other words, the $1.8 trillion of homeless US treasury paper in the bond pits of Wall Street is not an aberration and it’s not isolated. After the worldwide central bank money printing binge of the last decade, which t0ok combined balance sheets from $5 trillion to $22 trillion, it’s a universal condition.

And that get’s us to the heart of the MAGA delusion. The Donald has been sold a bill of goods about the efficacy of tax cuts—and that’s the only real basis for his mistaken assumption that the US economy is fixing to boom—by a motley combination of supply-side ideologues, GOP politicians pandering to their donor base and the K-street business lobbies.

But tax cuts are not efficacious if they are deficit-financed late in the cycle and thereby cause an off-setting spike in bond yields. And they are also not efficacious if they fund corporate financial engineering rather than investment in productive assets, or if on the individual side they are temporary and are delivered primarily through credits rather than marginal rate cuts.

Needless to say, all of the above negatives apply to the GOP’s Christmas Eve tax cut bill in spades. And foremost among these is the “yield shock” that lies dead ahead.

As we see it, if the U.S. economy doesn’t buckle first (i.e. tumble into recession and then all bets are off anyway), the 10-year UST yield will break through 4.0% before the end of FY 2019. Indeed, it is hard to see any other outcome when the household savings rate in the US is still in the sub-basement of history.

Moreover, the distinguishing characteristic this time, as opposed to the plunge in 2005-2007 shown in the chart below, is that there is a 8.8% of GDP net treasury funding requirement today compared to just 1.0% back then. 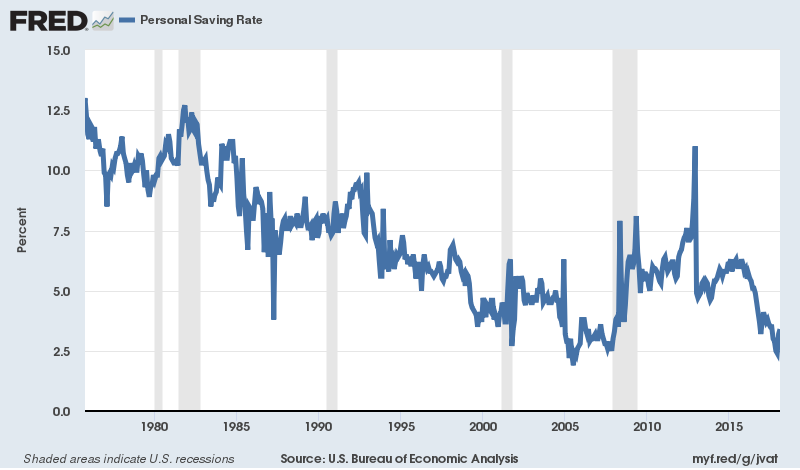 Accordingly, even in the case of today’s flat yield curve, the incremental debt service cost to US borrowers (households, business, government and financial institutions which collectively owe $68 trillion) will total $900 billion at an annual rate or roughly 3X the impact of the tax cut. 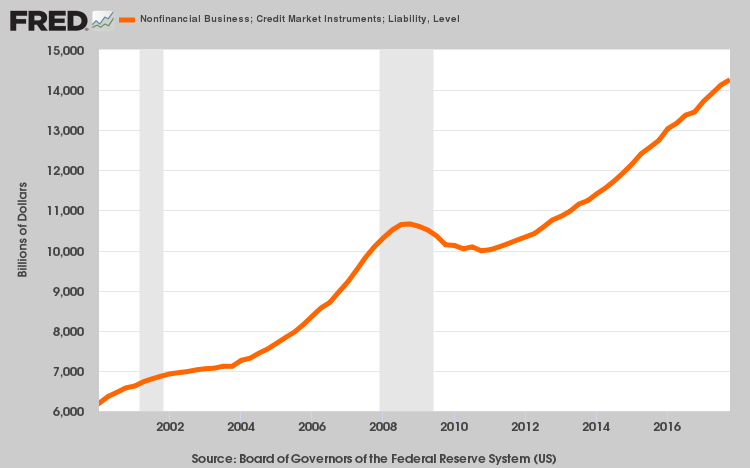 And, most especially, it will mean a nasty surprise for Uncle Sam. Owing to the Fed’s financial repression and its phony $85 billion per year “profit remittance”, the US treasury only paid $300 billion of interest this year.

But as yields move sharply higher and the Fed is forced to book massive mark-to-market losses on its hoard of Treasury and GSE paper, the carry cost on the public debt will skyrocket and the Fed’s profit remittance to the Treasury will disappear. Accordingly, Uncle Sam will be facing a $1 trillion annual interest burden far sooner than even the CBO now projects.

In fact, the coming yield shock will generate a fiscal bloodbath that would make mincemeat of MAGA—-even if the Donald were still around to witness it.

But as we will show in Part 2, we think a different scenario is now brewing. Namely, a route in the bond pits which will bring the stock averages crashing down, and the Congressional GOP in hot pursuit of a scapegoat wearing a red MAGA cap.