It truly does not get more bizarre and despicable than this: It seems that MBS not only sent to Istanbul 15 elite members of the Royal Guard (MBS’ body guards which report directly to him) special forces, top intelligence officers and Royal Air Force personal, but among them was Dr. Bonesaw and Mr. Body Double, too.

That’s right. Here is the latter garbed in the still warm jacket, shirt, shoes and trousers of the late Mr. Khashoggi—coming out the back door of the consulate just like they said. And compared to his picture going in, Mr. Body Double (aka Mustafa al-Madani) appears to have grown an instant beard, too. 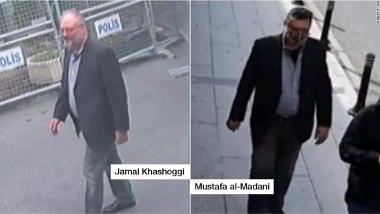 This body double gambit got us to thinking about the apparent bull market which came roaring out of the financial slaughter-house after March 9, 2009. Perhaps the bull is still dead after all, as it should be; and that what we have down in the casino is just a Fed confected simulacrum—the financial equivalent of a body double that has been injected with so many monetary steroids that it kicks, snorts and gallops like the real thing.