If collective headstands in the Eccles Building would be just as efficacious as QE and ZIRP when it comes to main street growth, jobs, incomes and inflation, the same cannot be said for the Fed’s impact on Wall Street.

When it comes to the latter, the Fed’s machinations are more than efficacious. In fact, they have unleashed a veritable boom in speculation and momentum chasing—a tsunami that sweeps up all in its path including the C-suites of corporate America which have become utterly addicted to cheap debt and financial engineering.

So doing, the C-suites have massively rechanneled corporate cash flows and balance sheet capacities into stock buybacks, vastly over-priced and uneconomic M&A deals and other forms of leveraged de-capitalization. At length, the economic resources channeled back through Wall Street end-up on the inflated balance sheets of the 1%, even as productive investment on main street goes wanting.

Today’s poster-boy for the evils of central bank fueled financial engineering is the venerable Ford Motor Co., which was sent to the financial junk yard last night when Moody’s pulled its investment grade rating.

Well it might have. As shown below Ford has spend the past six years of the present so-called recovery trashing its balance sheet.

Needless to say, no sane company in the fiercely competitive and vastly over-capacitated global auto business would have even close to that kind of excessive leverage—-and especially one that escaped by only a hair the ignominy of bankruptcy experienced by GM and Chrysler during the financial crisis. At that point in the cycle (2013), for example, Toyota had a debt/EBITDA ratio of only 4.3X.

But what happened next gives the old saw about letting a good crisis go to waste a new definition. To wit, by Q2 2019, Ford’s debt had soared to $156.0 billion, while its EBITDA had shrunk to just $4.0 billion.

You really can’t make this stuff up. When Ford needed to cleanse itself of debt in preparation for the next global recession and automotive industry over-capacity and cash flow collapse, it did the opposite—pushing its leverage ratio from 7.5X to an incredible 39.0X!

Of course, financial engineering did not help. Even as Ford’s global sales have stagnated at $150-$160 billion during the last six years, and net income has plummeted from $12 billion in 2013 to $4.0 billion during the LTM period ending in June, the company’s leadership saw fit to distribute nearly $19 billion in dividends and stock buybacks.

These unearned distributions occurred, of course, even as Ford’s China business was heading south and the global auto cycle was peaking, and is now sharply deteriorating. 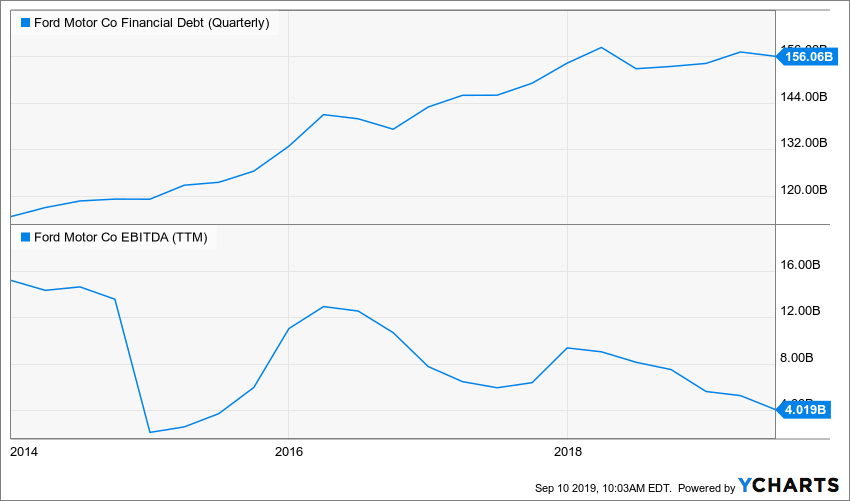 Nevertheless, the corporate bond market remained oblivious. Prior to last night’s downgrade, Ford’s 5.113% notes of 2029 were trading at a yield of just 3.16%. That means they were being priced at a considerable premium to par, but for one reason alone.

Namely, with the central banks having driven fully 30% or $17 trillion of the world’s $50 trillion in sovereign and investment grade bonds to into subzero land, portfolio managers have become literally crazed in their desperate quest for yield.

Accordingly, they ended up pricing the debt of an auto company steadily stumbling toward the bankruptcy courts at nearly 105% of par. And that’s just plain whacky.

More importantly, all of this cheap debt did not go into CapEx—-the ostensible reason for the Fed’s massive and chronic interest rate repression. In fact, since the late 1990s Ford’s CapEx to sales ratio have declined by 40%.