The shares of aptly named Upstart Holdings cratered 60% this morning after the cloud-based “artificial intelligence lending platform” shocked markets by cutting full-year revenue guidance on macro uncertainties and a possible recession. Imagine that!

The stock closed today at $33, down from $80 yesterday, and a whopping $400 in mid-October. In round dollar terms, the company’s market cap has shriveled from $32 billion to $2.8 billion, and well it should have.

At its 2021 peak seven months ago, this loan facilitator was trading at 543X net income and 209X free cash flow. Fast forward to the present, however, and it has nearly retraced the entirety of last year’s explosive rise from its $2.13 billion IPO valuation.

The real silliness, of course, is not the violence of today’s collapse, but that a “lender” with just a smidgen of loans on its midget balance sheet ($945 million ex-IPO cash) rose by 15X from its December 2020 IPO value in less than 10 months owing to mindless momentum chasing in the casino. 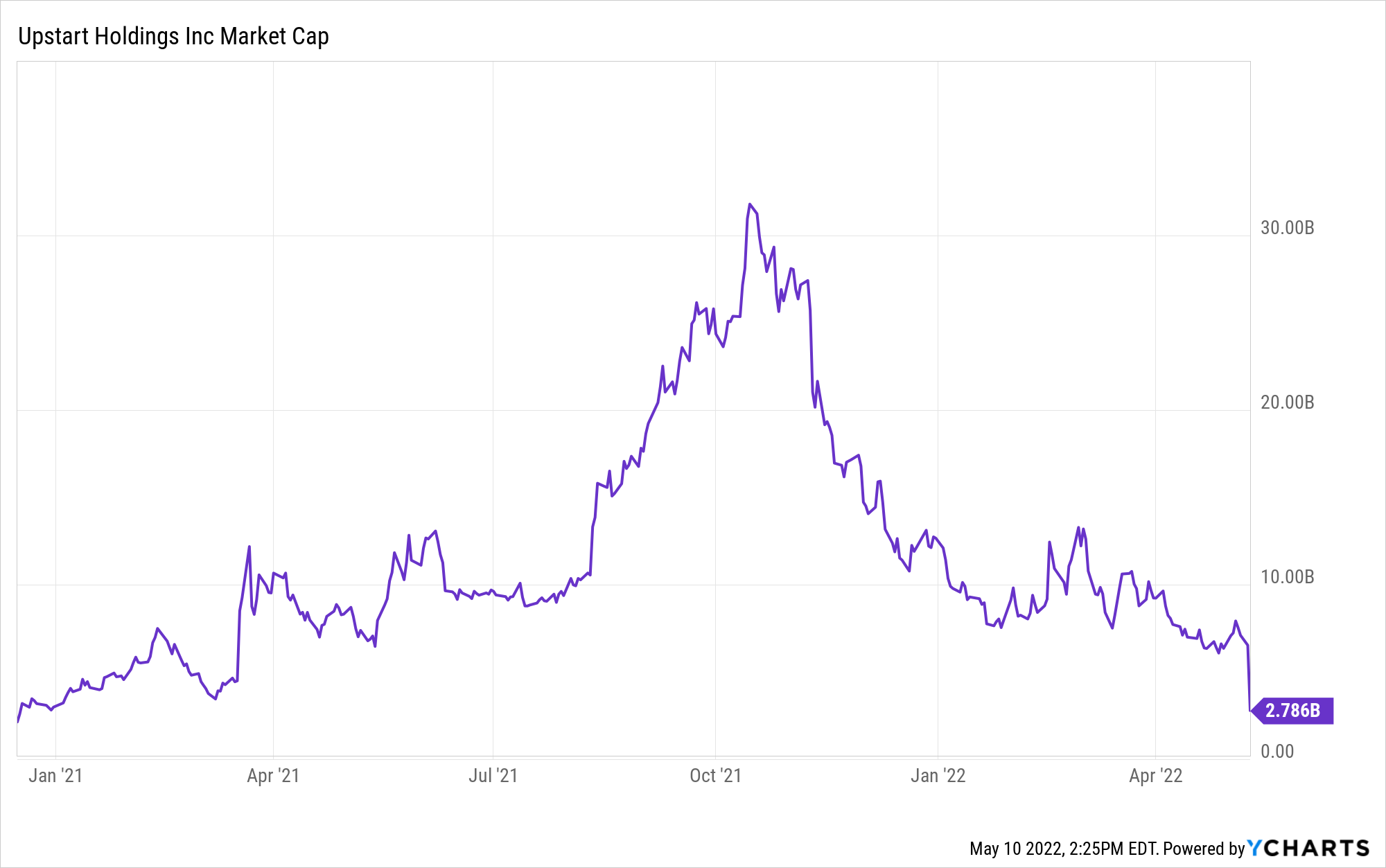 Of course, Upstart Holdings Inc promoted itself as a new style fintech operator, providing credit services on its proprietary, cloud-based, artificial intelligence lending platform. The platform aggregates consumer demand for loans and connects it to its network of AI-enabled bank partners, which actually make the loans, assume the credit risk, fund the assets and service the payment streams. Upstart’s revenue is primarily comprised of fulsome fees paid by banks for what amounts to AI-based leads and credit risk analysis.

Alas, after reporting several quarters of sizzling double digit gains in loans originated and fees collected, things came to a screeching halt in Q1. The number of loans originated on the platform declined by 6% from 495,205 in Q4 2021 to 465,537 in Q1 2022, while the dollar volume of loans was essentially flat at $4.5 billion and revenue barely rose from $304 million in Q4 to $310 million in Q1.

In a word, even the company’s vaunted software couldn’t convince banks to keep lending to its tapped out market of dubious credit risks.

Accordingly, Upstart reported a flattish annualized run rate of $1.2 billion of fee based revenue against $1.1 billion of annualized operating expense. So, no, $100 million of operating income from AI-lead finding razzle-dazzle hardly justifies a $32 billion valuation, especially when the company added insult to injury by guiding to essentially flat results for Q2.

It was this skunk on the woodpile, however, that compelled the market’s attention after its earnings release. To wit, the company professed an inability to have much confidence in its net income outlook because Washington’s stimmies were ending, meaning that the wherewithal to service loans among its sketchy borrowers might be drying up. That, in turn, implies that delinquencies and loan losses might soar, thereby flummoxing the company’s vaunted AI and the willingness of lenders to pay fees which amount to a staggering 7% of loan values.

Or as the company’s spokesman bluntly stated the matter,

…think the bottom line is when you go through a period where the government essentially pays everybody’s salaries for most of a year and then suddenly stops, it’s a pretty damn difficult thing to calibrate exactly right.”

They got that right. In this case, Washington’s fiscal bacchanalia during the Covid essentially permitted a consumer loan marketing company with a some snazzy software to generate $32 billion of market cap for a brief moment in time without any demonstration that it has a viable business model that can offer sustainable value-added to actual bank lenders.

The larger point, of course, is that the consumer marketplace is chock-a-bloc with fly-by-night fintech schemes like that peddled by Upstart Holdings. It is no wonder, therefore, the total household debt has soared from the already frisky levels that prevailed on the eve of the 2008 financial crisis. Nevertheless, this week’s report that consumer revolving debt soared by a record $31.4 billion in March did not exactly imply “consumers are so bullish about the future, that they are maxing out their credit cards like never before”.

To the contrary, what the stunning surge in credit card use in recent months actually means was well stated by Zero Hedge this AM:

,,,,,,,having long ago spent their saved Biden stimmies, consumers have no other place to source their spending and are instead rushing to take advantage of Annual Percentage Rates (APRs) that are still low before the rates reset (much higher). Of course, those APRs will reset and the new rates will apply to the new, record, balances causing a sharp increase in mandatory interest payments.

The conclusion is that the US consumer is about to hit an epic brick wall, with spending about to crater, and sending GDP sharply lower (recall consumption is 70% of US GDP). When it comes to “sourcing their spending”, the logical place for households to obtain the wherewithal—wage and salary incomes—is not cutting it. That’s because modest wage rate gains are are being overwhelmed by inflation.

Thus, in inflation-adjusted terms, aggregate wage and salary disbursements in March were below levels attained in September 2021, and represent a truly anemic gain since the pre-Covid peak in February 2020.

To wit, the growth rate over the last 25 months amounts to just 1.14% per annum. And with inflation now accelerating faster than wage gains, the yellow line in the chart below will be heading further south in the months ahead. Indeed, the fact that inflation is outrunning wage gains is becoming ever more obvious. For instance, Americans are itching to travel this summer after navigating Covid-19 for the past two years. But now they face a new disruption to plans in the form of rapidly rising travel costs.

This not only includes the 8.5% CPI rate posted in March compared to last year, but also—

So the question recurs. Why in the world do the denizens of the Eccles Building keep insisting that workers and consumers are strong?

As it turns out, the chart below surely tells you all you need to know. 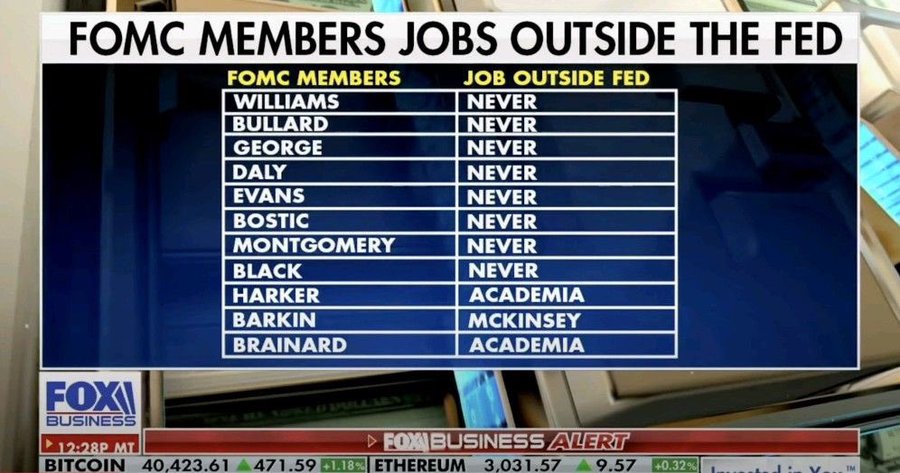