Our friends at the Committee for a Responsible Federal Budget (CRFB) published an absolutely grotesque chart this AM that captures the hysteria loose in the land about as well as any other.

To wit, by their careful reckoning the current year Federal deficit (FY 2020) will exceed even our own worst case outlook, clocking in at $3.8 trillion or a staggering 18.7% of GDP. 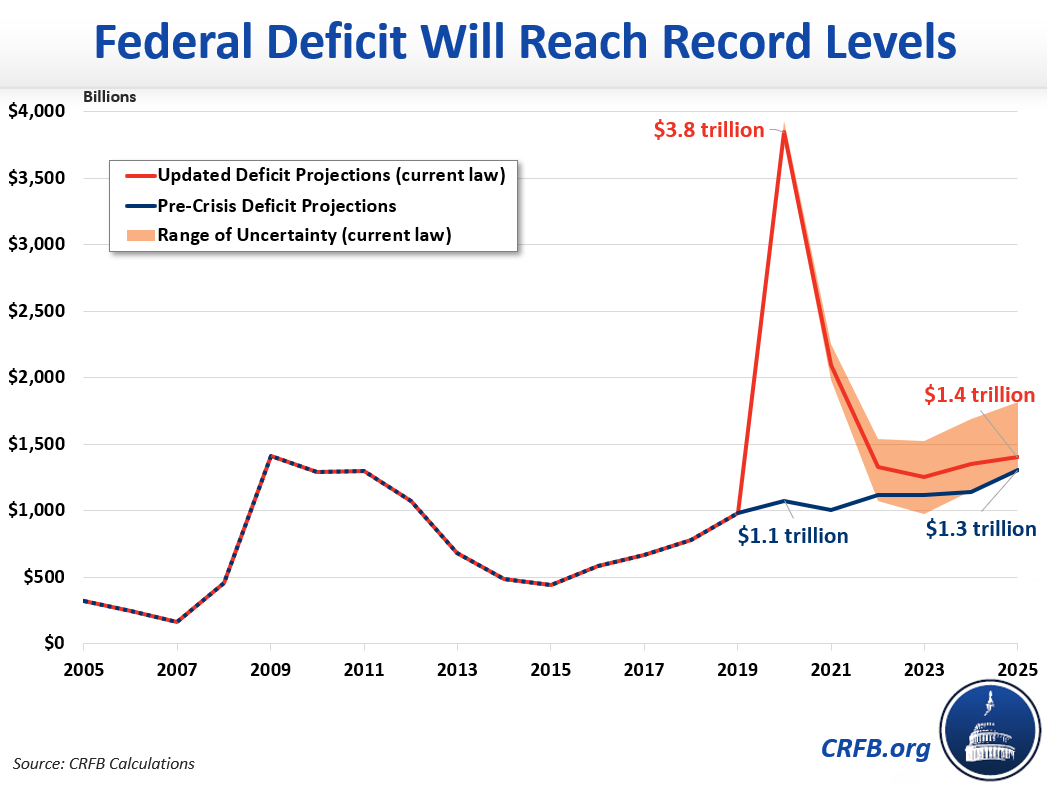 For want of doubt, that is in the same league as the worst World War II deficits when the US was 100% mobilized in a global war against Germany and Japan during which the entire civilian economy had been pressed into military production and consumers had nothing to buy except skimpy rationed necessities and war bonds.

Still, even under those exigent conditions, the Federal deficits averaged only 20.3% of GDP during 1942-1945 or just a tad higher than the 18.7% projected above. At the same time, taxes were raised from 8% of GDP before the war to 25% to help fund the war effort—meaning that nobody was getting $1200 helicopter money checks just because they had a social security number.

Moreover, after 5 years of extreme war austerity—during which the household savings rate soared from 2.5% of GDP in 1938-1939 to 17% in 1942-1945— the non-government debt burden had plunged sharply, leaving plenty of headroom in the private savings pool to absorb Uncle Sam’s prodigious wartime debt emissions.

Accordingly, with private debt outstanding reduced to just 60% of GDP, the only home for these massive, involuntary wartime mobilization savings was Uncle Sam’s war bonds, which peaked at 125% of GDP in 1945.

Today, the story is diametrically the opposite. There is absolutely no room left at the private savings inn. So the entire exploding Federal deficit is being monetized by the Fed  (i.e. fraudulently financed with the printing press) at exceedingly great cost and peril to the future of the nation.

Based on the CRFB numbers above, the public debt will again reach 125% of GDP in FY 2021, but this time the non-government debt burden (household, business and financial institutions) stands not in the sub-basement but in the nose-bleed section of history at $53 trillion or 240% of GDP—-the very highest level ever recorded relative to national income.

So, among other things, the hoary Keynesian claim that current soaring public debt levels are no sweat because “we did it in WWII” is risible nonsense. Back then, the household savings rate was 2.5X higher than today and private debt levels were only one-fourth of today’s staggering burdens.

So does our latter-day Trumpified GOP have any idea of what it is doing on the fiscal front—even with resort to Keynesian apostasy?

Most evidently, it does not. Besides, this ain’t WWII in any way, shape or form. America is not being besieged by a foreign military power, or an outbreak of deadly nuclear radiation across the land or even a massive drought-induced famine or outbreak of fatal disease like Ebola.