We are not big fans of Elon Musk, but he certainly hit pay dirt with these recent tweets:

Technically, I tested positive, then negative twice, then positive again, so “Elon Musk Tests Negative for Covid” is an equally correct title. The “rapid antigen test” from BD seems to be about as useful as a flipping a coin.

He got that right, but his conclusion applies to a lot more than the rapid antigen tests he was taking. What’s actually “bogus” at the present moment is the entire mainstream narrative on just about everything—the Covid, the election, the stock market, the “stimulus”, the Fed, the national security and much more.

Needless to say, underlying most of this Fake Narrative one way or another is the Trump Derangement Syndrome (TDS) and the sheer psychosis that afflicts the most prominent and visible talking heads among the “resistance” ranks of the MSM, who, unfortunately, manage to spread their sickness to the unwashed American public by dint of 24/7 repetition.

For instance, by accident last evening we turned on the sound while CNN’s Don Lemon was having a cozy jawfest with John Bolton about Trump’s allegedly dastardly firing of Defense Secretary Esper, and the fact that his next target might be the swell public servant who heads the CIA, Gina Haspel.

When it comes to being “progressive” and “woke” and bleeding for humanity, no one in the MSM talks the talk with more gravity, religiosity and sanctimony than Don Lemon. But here he was giving a friendly platform to America’s leading rightwing neocon and serial war criminal, John Bolton, to defend a CIA lifer otherwise known as “Bloody Gina” and the “Torture Queen”, whose black history with the “company” is actually even worse than these monikers imply.

Of course, Bolton had already been fired by Trump and Haspel was about to be (hopefully), and in today’s MSM that’s evidence of virtue and legitimacy all in itself. Nothing else matters.

Likewise, we have this Tweet from another of CNN’s sanctimonious tut-tutters, Jim Sciutto, who is purportedly the network’s national security correspondent, but apparently is a Deep State cut-out. Here he is happy to tweet on how the Donald’s delusional belief that he was commander-in-chief was made crystal clear in Syria.

Not only was the Donald’s order to get all US forces out of that god-forsaken hell-hole sabotaged by his own officials, but the resistance was lead by Ambassador Jim Jeffrey, who was the Syria Special Envoy Trump hired to get the job done—notwithstanding that Jeffrey had been one of the nosiest neocon Never Trumpers during the 2016 campaign.

In #TheMadmanTheory, senior DOD officials told me how they fooled Trump into leaving troops on the ground: “If you look at his tweets, they were definitive about leaving. And then we didn’t leave. And now we haven’t left, we’re still there, and that’s a good thing.”

Actually, Jeffrey hasn’t even waited for the ex-POTUS’ body to go cold, as it were, recently explaining the blatant sabotage thusly,

We were always playing shell games to not make clear to our leadership how many troops we had there,” Jeffrey said in an interview. The actual number of troops in northeast Syria is “a lot more than” the roughly 200 troops Trump initially agreed to leave there in 2019.

“What Syria withdrawal? There was never a Syria withdrawal”, Jeffrey said. “When the situation in northeast Syria had been fairly stable after we defeated ISIS, Trump was inclined to pull out. In each case, we then decided to come up with five better arguments for why we needed to stay. And we succeeded both times. That’s the story.

So, yes, America First and ending the Forever Wars was bogus, too. Indeed, the con with respect to Syria—to say nothing of the new offensives against Iran, China and the idiotic escalation of sanctions on Russia—make you wonder about whether or not the Donald himself was actually a Deep State cut-out, too.

After all, when the Apprentice petered out, his 2012 birther campaign came a cropper and his debt-ridden real estate empire continued to slide toward insolvency, what else did he have left to do?

Next you have the so-called business news network at CNBC. Once upon a time Wall Street actually knew that there is no such thing as a free lunch and that limitless Federal borrowing and money printing by the Fed would amount to a financial suicide mission. The business press knew that, too.

No longer. The entire narrative that plays all day long on CNBC and its imitators at Fox Business, Yahoo Finance, Bloomberg News etc. is just plain bogus, too. It actually presumes that “stimulus” can go on year after year without cease in order to counter each and every economic set-back and bump in the road; and that when authorities are too slow to act, they needs be pilloried for undermining the stock market’s divine right to never stop rising, world without end.

Thus, this AM Warren Buffett’s pom-pom girl, Becky Quick, was interviewing one of the dumbest Senators in a body where there is a lot of competition, Ben Cardin of Maryland. She didn’t stop pestering him about why Congress isn’t doing its job enacting another $2 trillion Covid relief bill before some of the boys and girls on Wall Street lose their patience and start a hissy fit of stock selling.

In particular, it was beyond Quick’s not so quick imagination to understand how Mitch McConnell could even think that a paltry $500 billion on top of the $3.2 trillion of Everything Bailouts to date was adequate; and now that the White House has apparently  bowed out of the negotiations entirely, how was a compromise between Nancy’s $2.2 trillion and Stevie Mnuchin’s last offer of $1.8 trillion ever going to get done?

Then again, you might also wonder about how much free stuff is enough and whether the Wall Street Stimulus Chorus has even the foggiest notion of how much artificial spending power has been pumped into the US economy already?

Self-evidently, it does not. As of September, here is the annualized level of wage and salary income (brown line) and the level of total government transfer payments (purple line), including all the helicopter checks, PPP handouts, UI top ups, food stamps and Medicaid increases etc, since February. In a word—

That’s right. The series of Everything Bailouts passed sight unseen plus the built-in automatic stabilizers have generated a flow of Covid relief dollars that is 3.5X bigger than the actual loss of paychecks during the last eight months!

So the reason Washington should act with all deliberate speed to pile on another $2 trillion relief package is not because main street is suffering; it’s because the Wall Street algos are programmed to buy, buy, buy upon progress toward another “stimulus”, and now that the inconvenience of a presidential election is over, they are getting inpatient with the waiting.

In the meanwhile, households have upped their game buying durable goods like there is no tomorrow. There is obviously no want of money to spend, and no reluctance on the part of China and other global suppliers of durable goods to ship them fast and furiously to the US Amazon warehouses. 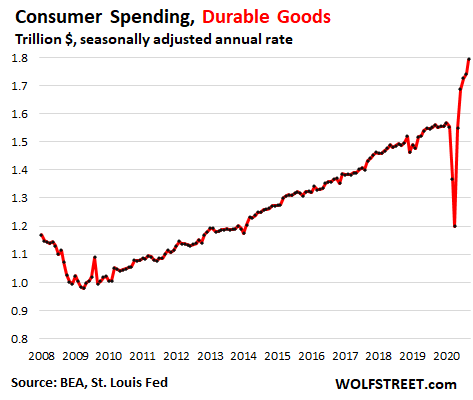 Of course, the algos are programed with numerous buy triggers including the 2020 substitute for 2019’s China Trade Deal. So pending the next stimulus, we now have the Covid vaccine silver bullet, which was hard at work this week, and resulted in today’s S&P 500 close at an all-time high, as explained by the Wall Street Journal:

The S&P 500 rose to a record Friday as optimism over a Covid-19 vaccine led investors to pile into previously underperforming sectors like energy and banks.

So speaking of bogus, today’s rally surely belong in that category, too. Ironically, the only thing that was honest about it is that Tesla’s market cap—–which at $387 billion represents 819X its LTM net income—actually dropped by $3.5 billion.

Still, Elon Musk is surely on to something about the allegedly exploding second wave of the Covid supposedly stalking the nation and inducing the Virus Patrol to begin shutting off the lights once again.

We thought it a bit excessive even for Super-Elon to be getting four Covid tests in one day and weighing in twice each on the positive and negative columns of the great national Covid count. But, alas, that seems to be exactly illustrative of what is going on in the testing center parking lots from sea-to-shinning sea.

With respect to the state of Maryland, which as we explained yesterday is slipping back into Lockdown mode under the orders of its Republican governor, we found this little gem in the state’s data.

To wit, back in June after the first wave of the Covid had sharply abated, the state had reported 10,130 tests per day, but only 7,800 test takers per day. So back then and before the Covid-Hysteria had developed a full head of steam, the average test-taker had taken 1.3 tests during the period.

By contrast, during the first 12 days of November, the state reported 28,240 new tests per day representing a 178% increase from June, but only 11,110 test-takers per day reflecting only a 42% rise from the June level. That means that during the last 12 days, the average participant in the great Covid test taking marathon in the state of Maryland was tested 2.54 times.

That’s not quite Elon Musk’s four tests in one day, but the implication is clear. A lot of people are taking the PCR test over and over and over until they get a negative result—so they can go back to work or possibly visit their grand-kids or grand-parents, as the case my be.

In the process, the zone is being flooded with even more false positives than are already endemic in the flawed 40-cycle amplifications of the PCR test.

In any event that probably explains the real bogus meme of the hour—namely, the MSM claim that the nation is in the midst of a  renewed pandemic disaster and that a very “dark winter” lies ahead.

As it happened, during the first 12 days of November, the CDC reported 16.2 million new tests and 1.37 million new “cases”. Yet just 2.3% of those new cases were even hospitalized.

You can call that testing gone off the deep-end and “cases” inflation run rampant. But it’s not a public health crisis.

In fact, it is just another very Bogus element of a mainstream narrative which is riddled with the same.