Not only is honest price discovery dead on Wall Street, but apparently the joint is just plain brain dead, too.

After all, how can you otherwise explain the current ripping stock indices in the face of Sleepy Joe’s fiscal shit-show. The latter embodies the largest tax increase since WW II and will reduce after-tax earnings by at least 15%, while his $2.25 trillion “infrastructure” bacchanalia will constitute the single greatest waste of economic resources ever undertaken by the Federal government.

Still, in the face of these economic body-blows we have the S&P 500 crossing the 4000 mark, meaning that its trading at 34.0X the $117.67 per share expected for the Q1 2021 LTM period; and that would be 38X after-tax earnings if Sleepy Joe’s proposed tax mugging of corporate American were to actually materialize.

And that’s just the “cautious” valuation for the big cap S&P 500. The NASDAQ 100 is now trading at 38X LTM earnings and the Russell 2000 is at 59X next year’s earnings, owing to the fact that current actual in-the-bank earnings are still negative!

Of course, this madness is all predicated on the so-called re-opening trade and a roaring economy that will purportedly take Q4 2021 LTM earnings up by 67% from 2020 actuals and Q4 2022 earnings to 95% above what was recorded for the December 2020 LTM period.

In other words, it doesn’t matter how much debt is piled on the public and private sectors, which mountain already towers at $84 trillion, or how destructive of free market efficiencies Washington directed capital allocation might be. What matters, apparently, is that the Fed will not let the market correct by even 5% and that massive government spending means more growth, jobs and profits.

Alas, it does not. If you were to spend $2.25 trillion building pyramids in every state, it self-evidently would not add to national wealth or living standards, but, instead, would constitute a massive dumpster fire of scarce capital.

Here’s the thing. Sleepy Joe’s massive infrastructure plan is barely one-step removed from pyramid building. Check the boxes in the graphic below, and that’s exactly where you come out in the overwhelming share of cases.

Worse still, Biden and his minions think this monstrosity is the greatest thing since the New Deal and LBJ’s Great Society combined. But when Washington gets this grandiose and unhinged about the purported good works of government, its long past time to duck and cover.

“This is not a plan that tinkers around the edges. It is a once-in-a-generation investment in America, unlike anything we’ve done since we built the Interstate Highway System and the Space Race,” in the 1950s and ’60s, Biden said.

“We have to move now. I’m convinced that if we act now, in 50 years people will look back and say, ‘This was the moment America won the future.’ ”

We noted the absurdity in Part 1 of $80 billion for Amtrak, which should actually be treated to a mercy killing, and the big freight railroads, where Union Pacific, Warren Buffett and the rest of them are drowning in free cash flow and stock buybacks and don’t need no stinkin’ help from Uncle Sam’s depleted treasury.

But actually, the more serious point is why would anyone on Wall Street believe that the utter fools in Washington, who have been spending American taxpayers into penury, can actually allocate freight rail capital investments more efficiently and productively than is already being done by the most technologically-advanced and capital-driven rail industry that America has ever seen?

There is absolutely no doubt that this would be the greatest waste of $850 billion of scarce capital ever conceived. Yet these cats have the gall to say that it will stimulate productivity and supply-side growth!

What in the hell planet do they live one?

Indeed, this is actually worse than the paint-by-the-numbers Keynesian demand stimulus error. That is, every dime of government spending may initially get tabulated into the GDP, but eventually there is a a growth-retarding and wealth-destroying due bill in the form of higher taxes, bond market crowding out of private investment or bubble- and malinvestment-fueling monetization of the public debt by the Fed.

But the rationale for the Biden Infrastructure Boondoggle is is even worse. It amounts to flat out single entry-booking and an economic model based on crude quantities of dollars rather than price- and profit-driven allocation of capital.

For example, a typical Wall Street shill by the name of Paul Ashworth has already noted that if the package’s higher spending was spread evenly across the eight years, it would amount to roughly $250 billion a year, or about 1% of annual GDP—while the tax provisions would raise about $125 billion, or 0.5% of GDP in corporate tax revenue over 15 years.

And how does that horrendous trade-off of inherently wasteful public spending for heavy duty tax extractions from private businesses pencil out according to this genius macro-economist?

That would translate into a net stimulus of roughly 0.5% of GDP in each of the first seven years under the plan, as spending outpaces revenue collection, estimated Paul Ashworth, chief U.S. economist for forecasting firm Capital Economics.

You can’t make this stuff up. As we said, Wall Street is indeed brain dead. 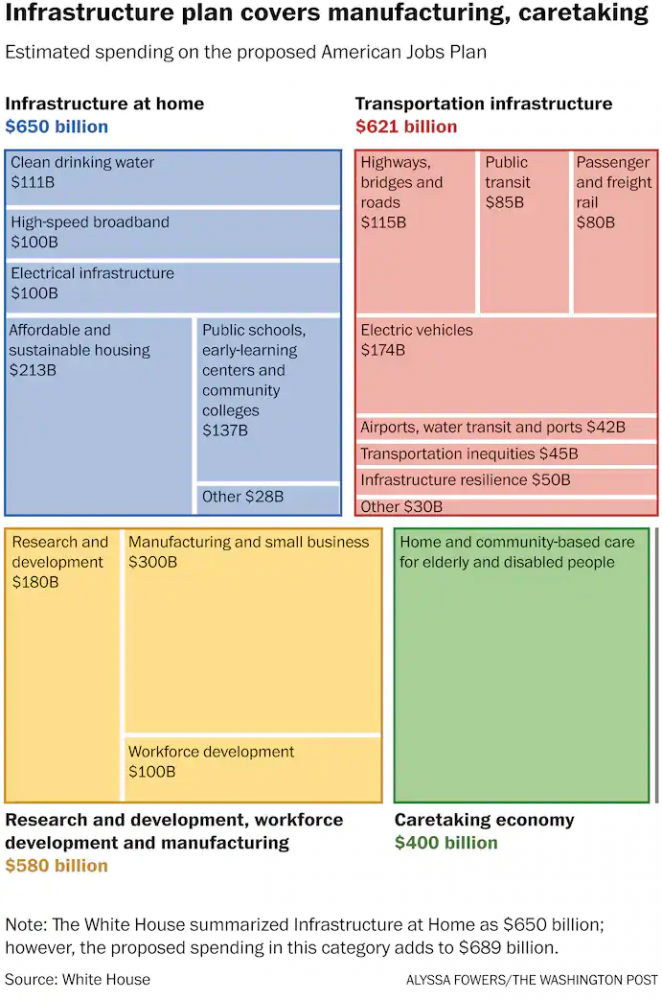 For want of doubt, consider the $100 billion per year for upgrading the nation’s electrical power grid. Why in the world do these Washington spenders think the electrical grid needs CapEx help from Uncle Sam at all, to say nothing of the stunning and unprecedented sum of $100 billion?

After all, the publically traded electric utility industry is enormously profitable, spends prodigiously on its capital base (because that’s what its regulated rates are based on, among other reasons) and has raised massive amounts of debt and equity capital on Wall Street in recent years to fund its operations.

For instance, during the past 5 years five of the largest electric utilities—Duke Energy, Dominion Energy, Southern Co., American Electric Power and Exelon Corp—booked $540 billion of revenues, $56 billion of net income and $150 billion of cash flow from operations.

Did that somehow leave these giant companies—with an average of $22 billion per year of revenue—pinching pennies when it came to CapEx?

It did not. These five leading electric utilities  actually spent nearly $180 billion for capital investment in their power plants, distribution facilities and other plant, equipment and technology over that 5 year period. And that was actually $30 billion more than their cash from operations.

Needless to say, there was no mystery as to how they financed the $30 billion free cash flow shortfall plus about $50 billion of dividend payments on top of that.

To wit, they borrowed it, of course, and at a bare bones 3.5% pre-tax interest rate. In dollar terms, their combined debt went from $145 billion in December 2015 to $225 billion in December 2020. That $80 billion debt expansion covered their negative free cash flow and generous dividend payment, too, which amounted to 90 percent of net income.

In a word, CapEx in the electrical utility industry is a non-problem numbers-wise.

But even if there were more of a financial pinch, the right way to fund utility CapEx is via the rate payers. Their the ones who create the demand, and if you want efficiency and sustainable growth, the cost of the utility’s asset base should be reflected in charges to direct users, not general corporate taxpayers or, worse, to the Fed’s printing press.

Of course, the debate about whether the private electric utility model would supply the economy’s electric power needs at reasonably efficient prices was resolved decades ago. These lumbering giants are inherently inefficient, of course, owing to asset-based rate regulation. Then again, the alternative—publicly owned power companies and the Federally financed electric coops—are far worse.

So why is Sleepy Joe dredging up what amounts to a dog-eared case for public capital investment and the TVA redux?

Instead, this is all about snuffing out internal combustion engines in the transportation fleet and decommissioning fossil fuel power plants in the utility industry. It’s not “infrastructure” in the positive buzz word modality; it’s the AOC/Bernie Sanders Green New Deal lurking in the guise of standard congressional pork barrel.

It’s also, and more crucially, profoundly anti-growth, gussied-up in the rhetoric of growth.

What that means is that the $100 billion in the Biden plan for the electric power grid and another $174 billion to promote elective vehicles and erect an absurd total of 500,000 EV charging stations will actually cause enormous capital destruction and loss of national economic productivity and growth.

That’s because the aim and effect of these massive public subsidies for EVs and their related  infrastructure, including an assumed huge increase in electric power capacity to charge the EV fleet, would be a vast amount of premature obsolescence of the fossil fuel based capital stock. It amounts to a perverted form of Schumpeter’s “creative destruction”, but one driven by clueless government bureaucrats and legislators rather than the efficient forces of the market.

For instance, there are currently 270 million internal combustion (IC) engine vehicles on the nation’s roads, with an average depreciated value of at least $15,000 per vehicle. Accordingly, the in-place value of the IC fleet is roughly $4 trillion. Yet the purpose of Sleepy Joe’s $274 billion of Green New Deal for EVs is to destroy as much of that value as possible, as soon as possible.

Likewise, of the 1.2 million megawatts (MW) of electric generating capacity in the US, just under 800,000 MWs is accounted for by natural gas and coal-fired plants. On a replacement value basis this capacity is worth about $1.3 million per MW or $1.0 trillion for the entire fossil plant base.

Again, the climate change hysterics who were actually pulling the strings during the development of this latest Biden Boondoggle want as much of that $1.0 trillion of fossil capacity to be decommissioned and destroyed as possible.

In any event, this gets us back to double-entry book-keeping. The purpose of much of the $2.3 trillion Biden Infrastructure plan is to supplant, obsoletize and destroy multi-trillions of the existing capital stock on the grounds that its not politically correct from a green and woke point of view.

Consequently, the Keynesian style spending stream displayed in the chart above would actually be off-set by the crushing of existing capital stock; and overall GDP would be lowered as high-cost new green capital replaced lower-cost existing internal combustion engines and fossil fuel plants.

As we will amplify in Part 3, the same is true with respect to the parts of the Biden program which would replace state and local spending (e.g highways) and airport and port user-fee funded capital with centralized allocations from Uncle Sam’s empty checking account.

This, too, would result in reduced efficiency and productivity in the capital stocks—a recipe for reduced national prosperity and wealth over any reasonable period of time.