Donald Trump has been well relegated to the sidelines of America’s political debate, but the TDS (Trump Derangement Syndrome) lives on, more virulent than ever. The latter is what’s behind Washington’s descent into the current mindless Ukraine war fever—an outbreak of irrationality that makes even the post-9/11 hysteria seem like an orderly discourse.

At the center of this madness, of course, is Vladimir Putin, the Devil Incarnate. Prior to February 24th he had attained that designation in Imperial Washington not just because of his rough methods of governance in Russia or small time military forays in the 2008 South Ossetia/Georgia dispute or in putting down alleged terrorists in Chechnya, but because according to the RussiaGate hoax he had thrown the election to Donald Trump in 2016, thereby shockingly interrupting the rule of the bipartisan duopoly.

Accordingly, for the next four years the apparatus of official Washington–including the MSM in cahoots with the national security state—did not cease in its vilification of Putin via the running RussiaGate Hoax, the phony Mueller investigation, the rogue impeachment proceedings and the nonstop MSM linkage of Trump’s unwelcome presence in the Oval Office with the nefarious doings of Vlad Putin.

At length, the TDS got so virulent and all-consuming inside the beltway that the resulting enmity toward Donald Trump became coterminous with the demonization of Putin. Consequently, when Trump got ushered off the stage (barely) by the American electorate in November 2020, Washington’s war on the Donald simply got re-focused with fevered intensity on Putin. In the target practice galleries of Washington politics, Vlad became the Donald’s avatar.

Needless to say, with the politicians in both parties foaming at the mouth against Putin, the Deep State and military-industrial complex had a field day hyping Russia into a national security threat that was not remotely justified, but which did massively distort policy.

That includes perpetuating the Donald’s insanely bloated national security budget even further to $813 billion in the FY 2023 Biden request; stonewalling Russia’s reasonable proposals of December to reset security arrangements in eastern Europe, which would have precluded the devastation now besetting Ukraine entirely; and, after February 24th, turning the intramural dispute between Russia and its historic vassal and step-child, Ukraine, into a purported history-defining contest between peaceful Democracy and belligerent Autocracy—a struggle that justified launching a global Sanctions War against the very essence of the dollar-based payments and trading system upon which America’s tenuous prosperity precariously rests.

As a result of TDS-come-Putinphobia, Washington is now on a doomsday path that has no rational end game except the risk of WW III, even though the objective facts of the matter scream in the opposite direction. That is to say, in an objective and rational world, Washington would not be touching the Russia/Ukraine dispute with a 100-foot pole because it implicates nothing of consequence for America’s homeland security.

In the first instance, Russia is not a direct military threat to America notwithstanding some of its fancy new weapons and ultra high speed missiles. America’s triad nuclear defense is still fully in tact and is as lethal as ever. That means as between Russia and the US on the nuclear front, mutual assured destruction (MAD) still prevails, meaning that Russia would never launch a nuclear attack against America because of all the things Putin is, suicidal is not one of them.

By the same token, the idea that Russia poses a credible conventional military threat to the American homeland was always ludicrous, but is now laughable. In ten weeks it has not been able to subdue a weak neighbor with which it shares a 1,900 Km open land border (no mountains, no waterways, no walls!). So where in the world comes the historically unprecedented armada of carrier battle groups, massive air fleets and endless divisions of tanks and mechanized infantry required to invade and occupy the US of A, located is it is 8,000 Km away on the far side of central Eurasia and beyond the great Atlantic and Pacific moats?

Besides, the GDP of Russia is $1.6 trillion versus $24 trillion for the US. And for better or worse a Russian attack on America would bring NATO’s article 5 into play, thereby mobilizing $43 trillion of total NATO GDP, which is 27X more economic girth than possessed by Russia; and also $1.2 trillion of combined NATO military budgets, which is 18X Russia’s $65 billion military budget.

So, no, there is no plausible Russian military threat to the American homeland, meaning that Washington’s scary story stuff arises entirely from the fictional realm of lurid Warfare State propaganda.

For instance, there is the baseless notion that Ukraine is just a stepping stone in Putin’s grand plan for recreating the former Soviet Union. And unimpeded in Ukraine, he would not hesitate to roll through Poland, the Baltics and the Balkans in the creation of an empire that would eventually dominate Western Europe, too, leaving the US all alone, cowering behind the Atlantic and Pacific shorelines.

Alas, anything remotely leaning in this direction amounts to the unalloyed humbug of retired military officers and deep staters who are paid by think tanks and the MSM to scare the living daylights out of the public and the politicians alike.

In turn, that’s so they will more readily acquiesce to the $813 billion of military budgets that are not only a colossal waste, but a fount of the schemes and threats which actually undermine national security. The Washington sponsored Maidan coup of February 2014, which fractured Ukraine’s fragile polity and opened up the civil war against the Russian speaking Donbas that has now morphed into a prelude to WW III, is only the latest example.

The fact is, Putin is a Churchill level historian and the Russian leadership still has memory muscle that goes back to Soviet times. They know that Poland, the Baltics and much of the non-Serbian Balkans is a hotbed of deep anti-Russian sentiment that would make even an attempt at conquest a bloody, economically draining fiasco.

Putin may not appeal to the sensibilities of the dandies who scribble out Cold War 2.0 screeds at the Council on Foreign Relations, but his methodical crushing of the Ukrainian resistance demonstrates that he is the Cool Hand Vlad of the present era. As such, he is not about to fall for hopelessly impossible enterprises like the recreation of the old Soviet Union.

To the contrary, his operation in Ukraine is not the prelude to recreating the Soviet Union, but the coda to unfinished business in the 1300-year history of Russia and its “borderlands”, the latter term being the Russian meaning of the word “Ukraine”.

Accordingly, scratch any current map of the battle front in Ukraine, and what lies on the Russian controlled side to the east and along the shorelines of the Black Sea and the Sea of Azov shows up as “Novorossiya” (“New Russia”) on any map made between 1764 and 1917.

Even here, it is not crude Russian revanchism that motivated Putin’s desperate last resort invasion of February 24th; it was for better or worse, Moscow’s frustration with the relentless push of Ukraine into NATO on a de facto basis, and the relentless assault on the Russian speaking populations of the Donbas that over the eight years after the February 2014 coup had led to upwards of 14,000 civilian deaths and the utter destruction of towns and cities in the breakaway Republics every bit as horrific as the nightly MSM fare with respect to Russian bombing on the other side of the battle front.

So in a world not besotted with the TDS, the alternative course of action would be straight forward. No Washington sanctions; no taking sides in the Ukraine civil war and age-old disputes between Russia and its vassal; no supplying of weapons to the hopelessly outgunned Ukraine military that only prolongs the war; and a complete Washington renunciation of any interest in extending NATO to Ukraine or other ex-Soviet Republics, along with a pullback of US forces and missile installations from former Warsaw Pact countries that are now members of NATO.

Under that non-TDS scenario, this is what Washington would do in the name of homeland security and it would bring an end to the war and the pointless destruction of Ukraine in a heartbeat.

Needless to say, under this benign scenario, Joe Biden would not be asking Congress for $33 billion of additional Ukraine war funding, including more than $20 billion in “security and military assistance,” $8.5 billion in economic aid, and $3 billion in “humanitarian assistance” And, of course, this comes on top of the $4.6 billion in security assistance the U.S. has given Ukraine since January 2021, including $3.7 billion since Russian forces invaded the country in February.

All of that is an abomination, midwifed by the TDS and resulting irrational demonization of Putin. Yet the truth is, America’s homeland security does not require that a single dime be spent on Ukraine!

Likewise, it also most definitely does not require a single Congressional cowboy or cowgirl to be visiting a remote corner of the earth that does not have a damn thing to do with the security, liberty and prosperity of the American people.

As it was, the crew pictured below spent a little over three hours on the ground in Kiev conducting a glorified photo-op and “ata boy”. The delegation included a “who’s who” of the Dem House leadership—none of whom had the slightest idea of where they were as a historical matter or understood that the silly marionette they meet with had nothing more in mind than dragging America into a shooting war that is none of its business.

Indeed, in the pre-TDS times the Dem leadership would have been not on a junket to Kiev, but at the White House demanding an end to the Sanctions War on Russia, a halt to the destructive flow of arms from NATO and the urgent return to the conference table to negotiate an end to the carnage—even if it meant that partition of Ukraine, which after all that has now transpired cannot be reconstituted as a unitary state, anyway.

These people shouldn’t have bothered. They weren’t on a serious foreign policy mission, but had come to virtue signal that they still hate Donald Trump with all their hearts and are willing to start WWIII by making war on his Moscow avatar. 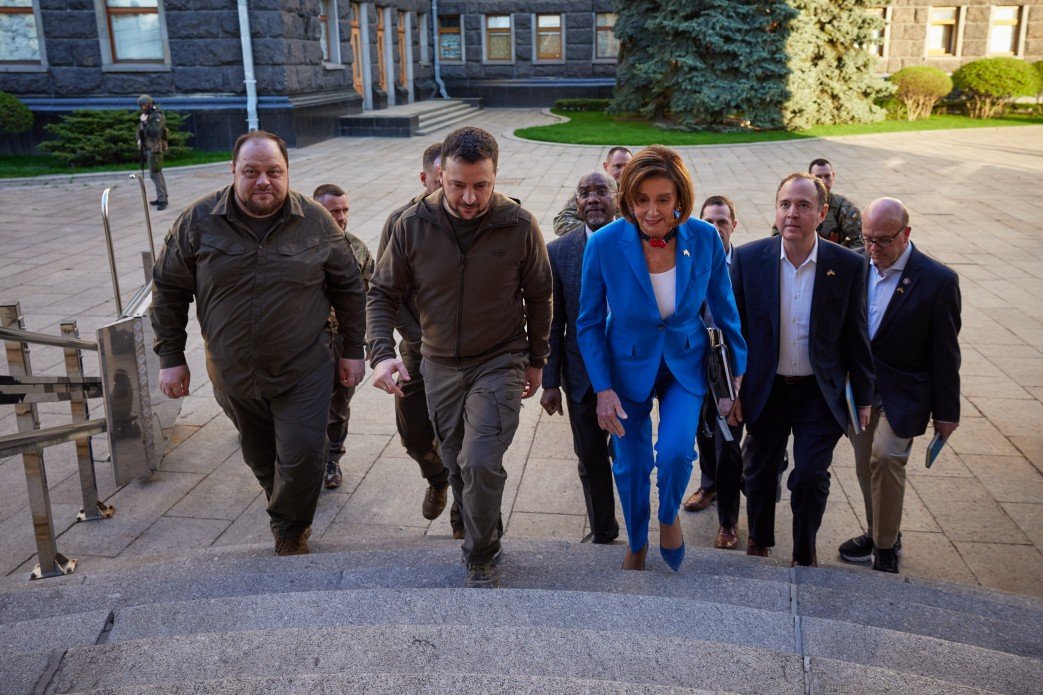 Indeed, in a fitting it benediction, Nancy Pelosi let loose of her best TDS idiocy:

“We are visiting you to say thank you for your fight for freedom, that we’re on a frontier of freedom and that your fight is a fight for everyone. And so our commitment is to be there for you until the fight is done.”

Alas, she may be right, but not in the way she imagines.