The estimable Scott Minerd of Guggenheim Partners has apparently had enough. His firm is as establishment as they come, and Minerd himself is a CNBC regular. Still, in his most recent commentary, no punches were pulled:

This will eventually end badly. I have never in my career seen anything as crazy as what’s going on right now,”

“In the markets today, yields are low, spreads are tight, and risk assets are priced to perfection, but everywhere you look there are red flags,”

“We are either moving into a completely new paradigm, or the speculative energy in the market is incredibly out of control. I think it is the latter. I have said before that we have entered the silly season, but I stand corrected,” Minerd said at the end of his letter. “We are in the ludicrous season.”

We suppose you could offer today’s $2 billion equity issuance by Telsa at its current absolutely insane share price as a case in point, but, in fact, the latter is almost too ludicrous for words.

To wit, since last October 4th, Tesla’s market cap has increased by $103 billion to $145 billion. We focus on that “remarkable”  145% four-month gain because it happens to exceed the combined $102 billion market cap of General Motors, Ford And Fiat Chrysler combined.

That’s right. The embodied 125 year history of the American automobile industry with combined global volume of nearly 18 million vehicles, sales of $413 billion and profits of $15 billion has less market cap than Telsa with just $25 billion of sales and $6.5 billion of accumulated losses in its 10-year history.

Once upon a time, of course, stock valuations were driven by earnings and free cash flow. But as to the latter, there never has been any—with Telsa’s 2009-2019 total free cash flow coming in at negative $9.2 billion.

So it may be wondered, how did Tesla avoid chapter 11 all these years?

With today’s offering Tesla has now raised $14 billion in debt and equity, thereby proving our standard epithet: Wall Street is no longer a rational capital market where savers and investors come to discover the correct price for long-term capital.

To the contrary, it’s a pure casino endlessly fueled by central bank liquidity and a place where robo-machines and day traders come to gamble with their eyes closed and their brains on pause. 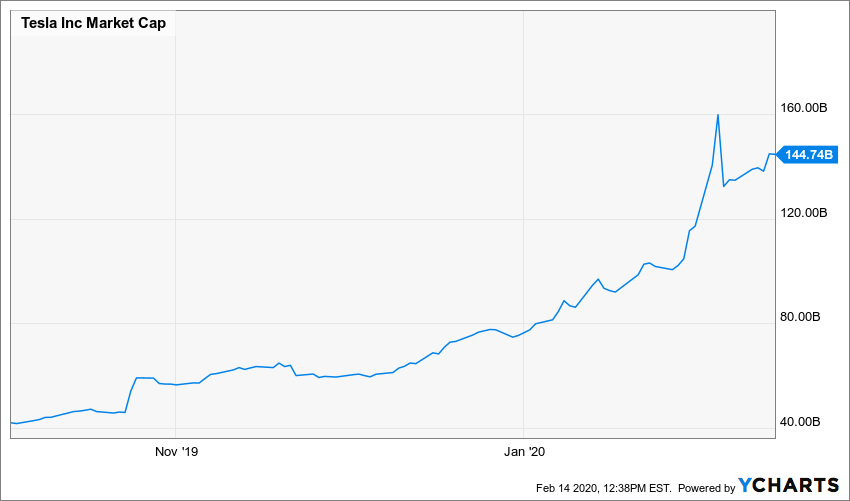 Then again, Tesla is merely a poster boy for the for the entire bubblicious market, not some kind of one-of-a-kind outlier.

Yes, you can get a good burrito bowl at Chipotle, and now lickety-split, too, by ordering on your app and picking it up in the drive-thru lane that McDonald’s invented decades ago.

The latter is supposed to be why CMG trades at such delirious multiples, but drive-thru lanes are not rocket science, app ordering is spreading like wildfire to the entire restaurant industry and Chipotle has been plagued with starts and stops for years due to intense competition in the space and more than one food poisoning episode.

Accordingly, during the five years since 2014, the company’s sales have grown by a humdrum 6.3% per annum and both net income and free cash flow have actually declined by 21% and 10%, respectively.

We do not have the wrong sign on the figures. Its earnings growth have been negative over any reasonable period of time.

So what we have is a fast casual restaurant chain that depends upon the debt-entombed mid-market American consumer, and which did not manage to sustainably grow its income and cash flow during the five year sweet spot (month #64 to #124) of the longest expansion cycle in history, trading at 65X free cash flow.

At least Tesla may be riding a secular shift to electric vehicles, albeit with plenty of competition if it materializes. To the contrary, when the next recession comes, pricey burrito bowls will take a hit—even if the drive thru lanes go faster owing to withering demand. 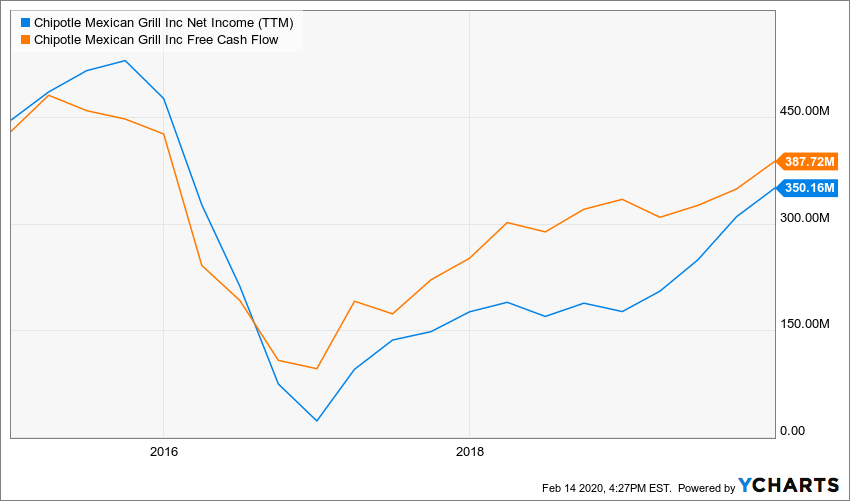 Or take the case of Netflix. You don’t even have to be a pedigreed binge-watcher to know that the streaming business is teeming with competition per Apple +, Disney +, HBO, Amazon Prime, Hulu and countless more. So it is far from clear as to which of these fiercely competitive vendors will prevail in this brave new world of 24/7 entertainment offers, or whether and when the sector will become profitable.

That’s why Netflix’s (NFLX) $167 billion market cap is such a testament to mindless pursuit of “growth” and the sheer mechanics of unhinged momentum chasing. Its current valuation amounts to 89X its $1.9 billion of net income, and it embodies an infinite multiple of free cash flow.

Of course, that’s because it has none of the latter. During 2019, the company’s operating free cash flow posted at negative -$3.1 billion and for the last five years cumulatively, the number was -$10.5 billion.

Indeed, it actually takes some doing to find a worse free cash flow chart than the one depicted below, and that’s especially when the aforementioned $10.5 billion of cash burn—which is getting decidedly worse by the year–is valued at $167 billion. 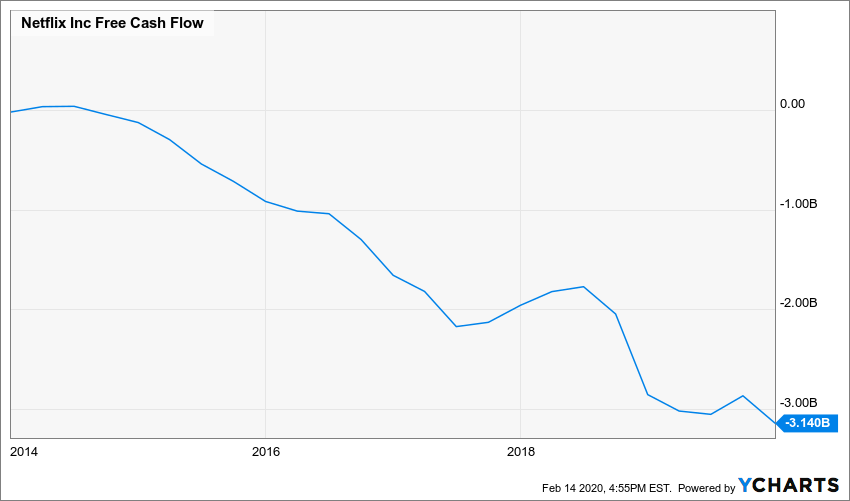 Then there is Boeing still trading at $191 billion–notwithstanding the Max disaster, the cataclysm hitting its largest customer in China, its evaporating order book and loss of market share to Airbus.  In fact, during 2019 Boeing’s order book actually shrank on a net order basis. 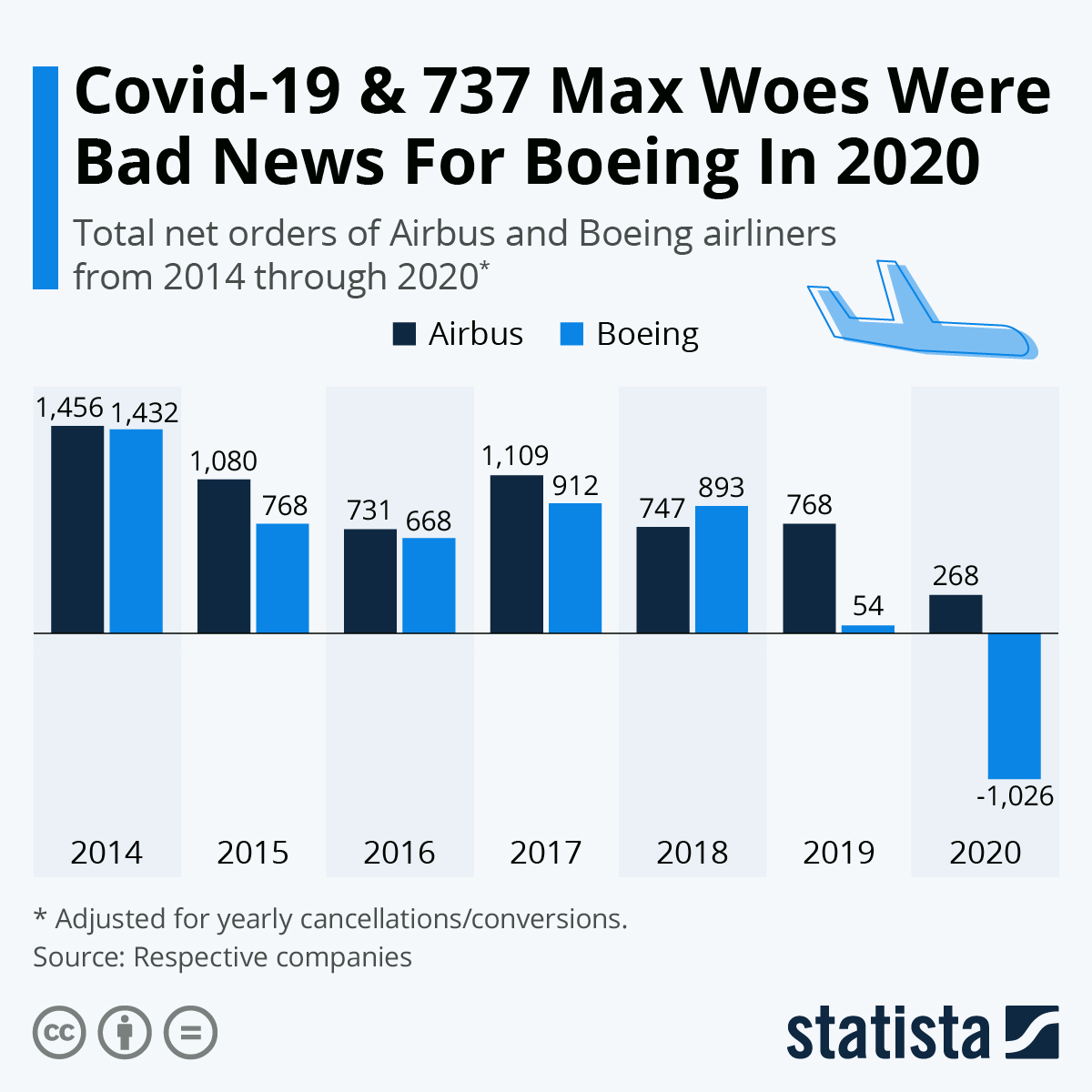 To be sure, Boeing is one of the great industrial franchises of the modern world, but after posting a $636 million loss during the most recent LTM period and negative cash flow of $4.4 billion, there is nothing but a sky hook upon which to hang its huge market cap.

Moreover, the fact remains that the global aircraft deliveries have fluctuated drastically over the cycle, and Boeing is now at the tippy-top of a decade long boom than began shortly after the Great Recession.

Given that historically Boeing’s deliveries (orange line) have fallen by as much as 50% in the down-cycle, it is hard to imagine a more perfect storm of negatives—-the China shutdown, the Max fiasco and the apparent end per the chart above of the longest commercial aircraft cycle in modern history.

You could call it whistling past the graveyard and be done with it, but that doesn’t obviate the self-evident dive of Boeing’s financials. Its LTM sales are now down a staggering $25 billion, its earnings and free cash flow have disappeared and its return on operating assets have plunged below the flat line.

Even then, it continues to be valued at 19X its peak earnings and nearly 15X its peak free cash flow. That is, the robo-machines and the day traders apparently believe that what Boeing lacks in future prospects, the Fed will make up with even more money-pumping. 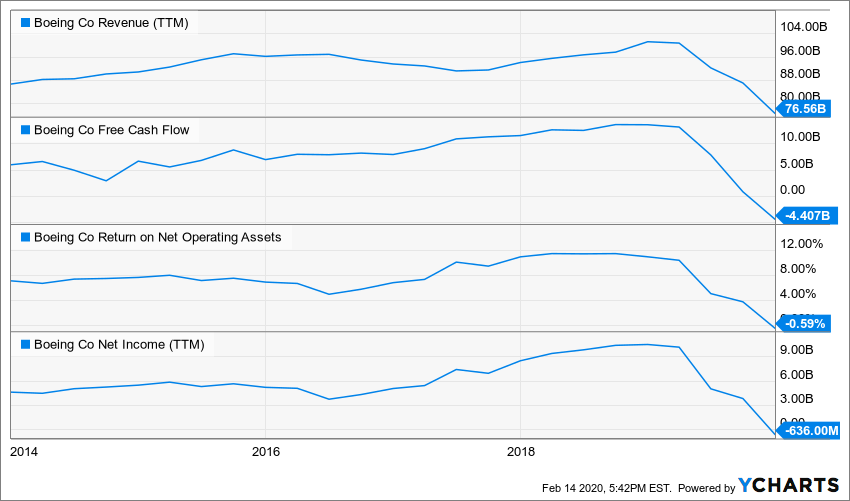 But based on today’s industrial production reports for January, it will have to pump like never before. The Wall Street promoted 2020 reflation just plain isn’t happening, and the great coronavirus driven global supply chain ruction is barely even started.

So we are not surprised that the Donald has no clue about the implication of the graph below. But the fact is, manufacturing output and overall industrial production—including energy and mining, utilities and manufacturing combined—are heading south at a rapid pace.

Indeed, the chart has its own ominous warning. The sharp dip in late 2015 and 2016 marked the last time that the China credit impulse ebbed sharply and global commodities, manufacturing and trade skidded below the flat-line.

But that time, Chairman Xi turned on the credit machine in order to glorify his October 2017 coronation as ruler for life.

Today he’s desperately scrambling to keep the debt-infected Red Ponzi from crashing down upon his head owing to the virtual quarantine of China’s industrial army and the shutdown of its production machine.

That means the plunging lines on the right margin of the chart are just beginning their descent.

It also means that MAGA’s not coming to main street any time soon—-even as Wall Street succumbs to the final madness of the greatest financial bubble ever inflated by unhinged central bankers.