Yesterday we got another reminder as to why the contemporary Republican party is worthless. To wit, Jerome Powell is undoubtedly the worst, most pusillanimous Fed chairman ever, yet the Senate GOP voted 37-13 to confirm him for a second term.

Yes, the emphasis is on the “second” part of the phrase. It’s not as if they didn’t know what they were getting or that they had been bamboozled by motherhood and apple pie nostrums from a blank slate nominee during confirmation hearings.

To the contrary, Powell has led an unhinged money-printing spree that saddled Wall Street with the most dangerous financial bubbles in history and main street with a virulent goods and services inflation that threatens to make mincemeat of middle class wages and savings, to say nothing of the financial battering being administered to fixed income retirees.

Moreover, as if to add insult to injury, Powell was no sooner confirmed than he let loose with some damning admissions. Namely, that the Fed is not omnipotent and that he should have acted against inflation sooner.

“The question whether we can execute a soft landing or not — it may actually depend on factors that we don’t control,” the Fed chair said……If you had perfect hindsight you’d go back and it probably would have been better for us to have raised rates a little sooner…. Now, we see the picture clearly and we’re determined to use our tools to get us back to price stability.”

Then again, what’s so unclear about the picture below, which we presented yesterday upon the release of the April PPI. They even learn in economics 101 that producer (nee wholesale) prices work their way through the goods and services pipeline and eventually show up in the CPI. For crying out loud, it’s a time-tested fact that the PPI is a leading inflation indicator.

So, pray tell what roomful of blind economists couldn’t see this inflationary surge coming down the pipeline last year, other than the clueless Keynesian clique presided over by Jay Powell in the Eccles Building?

The fact is, producer level inflation took off in the first quarter of 2021 and has been roaring up the pipeline in plain sight ever since. From a 2.6% Y/Y gain in February 2021 it had already reached 9.5% by last April, yet Jay Powell sat on his hands for another 11 months, mumbling nostrums about “transitory inflation”. There is no way to explain Powell’s non-action in the face of the above except to recognize that his mind is so pickled with Keynesian groupthink that he is incapable of even elementary economic reasoning.

Among other things, anyone paying reasonable attention would have noted that the “lowflation” of 2012-2019 wasn’t remotely what it was cracked up to be. Owing to the one time globalization of the durable goods supply chains to ultra-low cost venues in China and elsewhere, the sub-index for durables fell for eight straight years (purple bars). The total eight-year drop on the PCE-deflator version was 15% and upwards of 5% on the CPI.

But who in their right mind would believe that in today’s world prices for durable goods would keep dropping forever, world without end? Yet plunging prices for durables was exactly the factor that held down the overall CPI.

Moreover, what did a one-time arbitrage of cheap Chinese manufacturing labor have to do with Fed policy and its vaunted “tools”?

Well, except that the US central bank’s inflationary expansion of credit was exported to the industrial maws of China, thereby deferring the inflationary impact until such time as the off-shoring was complete and the new lower-cost global supply chains were struck with unexpected, cost-increasing dislocations, such as those stemming from unpredictable global developments like the Covid and the Ukraine War.

Likewise, did not Powell notice that prices for domestically produced service items, which are more directly amenable to impacts from the Fed’s “tools”, were rising at rates well above the Fed’s sacred 2.00% target?

In fact, during the 2012-2019 recovery from the Great Recession, the CPI for services (blue bars) rose by 2.8% per annum. The only reason the overall CPI came in at 1.8% per annum during the same period was was the one-time deflationary impact from off-shoring. Needless to say, the off-shoring windfall is not only over and done, but it has reversed direction and viciously so. The purple bars for durables are now soaring at double digit rates, while labor-cost driven services (brown bars) have doubled to a 5.0% rate of Y/Y increase.

Presto, therefore, the overall CPI is up by 8.3%, not 1.8%, and the Fed is not only eating inflationary dust, but Powell’s vaunted “tools” are being exposed as the wet noodles they actually are.

That is to say, as Powell has finally admitted, the Fed has precious little control over the purple bars. Instead, they are now reflecting virulent inflationary impulses from the global commodity sector and dislocated manufacturing supply chains, while the policy-enabled removal of potential low-end labor is fueling cost-push inflation in the domestic services sectors.

In all, Powell is being left sucking his thumb, along with his merry-band of Keynesian money-printers. Indeed, the interest rate tool is such a wet noodle at 25 bps and 50 bps a crack, that it is only a matter of time before the Fed is backed into Volcker-sized rate increases to quash the inflationary beast. Of course, when the Fed finally puts some serious wood to interest rates, the stock market will get hit by a ton of bricks. The entire TINA (There Is No Alternative) syndrome was based on ultra low interest rates, not rational discounting of future earnings prospects.

Already, the stock market is off to the second worse start in recorded history at -17.4% through April 30. But given how far the Fed is behind the curve, a first place full year finish is virtually guaranteed. 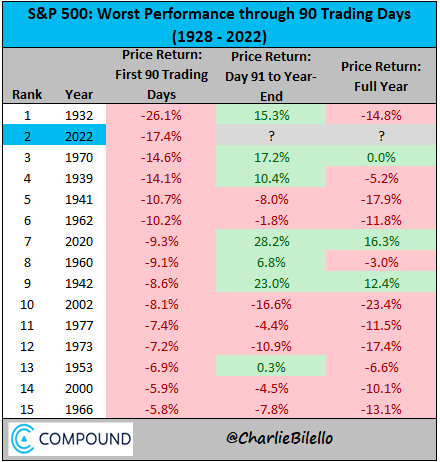 The unfortunate part of Powell’s abject failure on the inflation front is that the super-high interest rates which will be required to quell the inflationary fires will also slam the debt-ridden main street economy good and hard.

For instance, mortgage rates have already erupted, with the 30-year rate rising from a ridiculously low 3.10% at the start of 2022 to 5.3% and increasing rapidly.  That’s 220 basis points in less than five months and there is more than double that gain in the forward scenario. In fact, the mortgage rate could easily hit 7-8% when the 10-year UST is forced toward 5.0% or more. 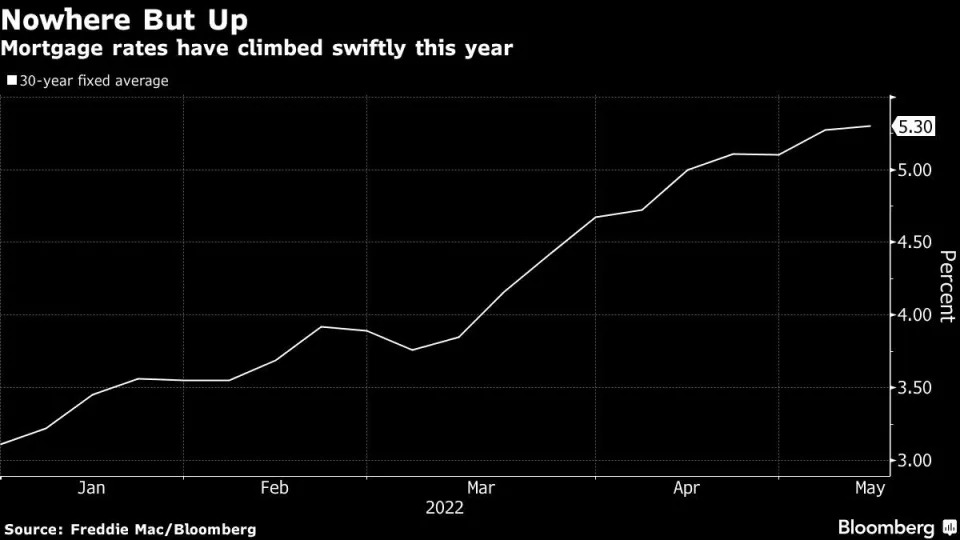 Moreover, the notion that the Fed is going to be positioned to take its feet off the brakes at the first sign of GDP and employment weakness is pure wishful thinking. That’s because the global supply chain is not nearly done emitting its cascading inflationary waves.

For instance, the world’s second largest contract chip maker, Samsung, has announced that its contract-based chip prices are set to increase between 15-20% in the second half. And as a recent Bloomberg article indicated, these are not commercial rumors but done deals that have been discussed and negotiated with customers.

Chip prices rising at double digit rates, of course, will only increase consumer costs for smartphones, tablets, computers, game consoles, televisions, smart speakers, automobiles, and the list goes on. That is to say, the double digit rates of durable goods price gains shown above are not about to roll over any time soon.

For want of doubt, the graph below shows that order lead times—exacerbated by the China lockdowns–has now been sharply extended, meaning more upward pricing pressures. The lag between when a semiconductor chip is ordered and delivered has now risen to 26.6 weeks, a record high.

To take another example, refined petroleum product prices are soaring, and not just because crude prices are stuck at $100 per barrel and above.  What is also occurring is that the downstream refining and distribution chain is being dislocated badly by stupid government policies. As a result, the refinery mark-up, or crack spread, has soared to unprecedented levels (@$60 per barrel), meaning that petroleum prices at the consumer level are way above what is implied by $100 crude.

These policy distortions include the anti-fossil fuel campaigns of Washington and European governments, which have reduced refining capacity. And that is now being compounded by the embargoes on Russian exports, which were a major source of gas-oil and other refined products. In effect, Washington’s unhinged Sanctions War has sharply exacerbated the already severe shortage of refining capacity by taking Russian refineries out of the global market.

The impacts of these supply squeezes have been especially dramatic in the case of diesel fuel prices, which have risen aggressively for the past three weeks and hit a new record of $5.557 a gallon on Thursday.

In all, this means that the middle distillate fuels which supply the entire trucking, agricultural and air travel industries are up by 128% from the pre-Covid level of December 2019. Likewise, gasoline prices are also at a new record at $4.42 per gallon, and now exceed the peaks reached during the blow-off top in mid-2008. 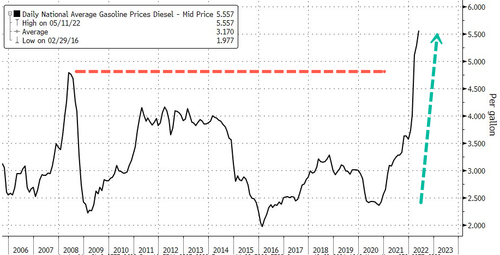 Needless to say, when Powell and his merry band kept the pedal-to-the-monetary metal until the 11th hour in the name of its “full employment” goal (and out of fear of a Wall Street hissy fit), it surely did not factor in the manifold untoward supply-side developments that are inherent in the global economy as we know it.

So they flooded the zone with demand, and now it is the stagflationary whirlwind which we reap.

You would think, therefore, that accountability might be in order, to say nothing of the top-to-bottom house-cleaning in the Eccles Building which is actually needed.

But when the ostensible party of fiscal rectitude and sound money rushes to shove another $40 billion into the Ukraine rathole while voting 37-13 to put a monetary arsonist back in charge of the Fed–all in one afternoon—there is fat chance of said reckoning.

And also a damn good chance of an economic and financial disaster of biblical scale just ahead.