If this isn’t Peak Trump, we can’t imagine what would be.

The Donald may have been booed by the swamp-critters at Nat Park and is only weeks away from being impeached by the U.S. House of Representatives, but by his lights he’s now the veritable king of all that’s so great you can’t stand it:

The S&P just hit an ALL TIME HIGH. This is a big win for jobs, 401-K’s, and, frankly, EVERYONE! Our Country is doing great. Even killed long sought ISIS murderer, Al-Baghdadi. We are stronger than ever before, with GREAT upward potential. Enjoy!

But the Donald is far from alone in his delusionary bubble. Recession is knocking on the front door, but the Wall Street chart monkeys pay no never mind. They keep baiting the hook—this is the fifth time in four months they have run the S&P 500 above 3000—-and are getting just enough nibbles (i.e. ultra low volume retail buying) from the home-gamers to keep the index levitated in nosebleed land.

We don’t really blame the chart-monkeys or the homegamers for the present mania, however.

It’s the job of the former to chase nothing but momentum, including when it plummets as per the Russell 2000’s heart-stopping crash from 750 to 340 in a few dozen violent trading days during the fall/winter of 2008-2009 as depicted below.

Nor do we sympathize with the homegamers. Anyone who tries to trade our present totally rigged, algo-dominated markets from their desk-top or iPhone deserves to get butchered when the time comes.

And it will—-for the third time this century. 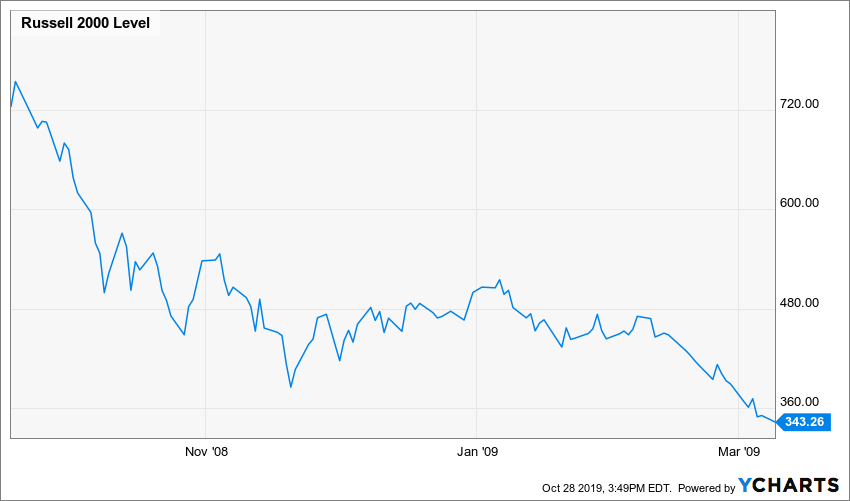 No, our beef is with the professional talking heads, strategists, and economists who pollute the airways of financial TV and business news every day. These people are about as lazy, mendacious and stupid as they come.

After all, they claim to be giving investment advice, not algorithmic input to machines which trade by the nanosecond. What would be the point of the latter on slow-mo TV, anyway?

Yet today they were all literally foaming at the mouth about the big stock “breakout” which allegedly is finally here. In Wall Street jargon, the latter term means that there is big upside ahead—so back-up the trucks.

But how could there be?

From a risk/reward perspective, given the political, economic and financial fragilities of the present moment, you surely need 15% upside as an investor to risk the 40-60% down-side that recessions inexorably generate. And even that assumes you are possessed of such cold-blooded discipline and acute market insight that you will know exactly when to bail after the above chart swoon materializes this time around.

Then again, and for the sake of apples-to-apples historical comparison, that implies the S&P 500 can hit 3500 (+15% from here) against reported earnings of $124 per share for the September 2019 LTM period.

The latter figure is what is actually being posted for Q3 adjusted for the $10 per share freebie owing to the corporate tax cut. So today’s “breakout” bet implies a PE multiple at 28.2X against in-place, pre-recession earnings.

Needless to say, neither of those moments of peak madness resulted in homegamers experiening something to “enjoy!” as per the Donald’s 6:41AM send-off.

In fact, 12-15 months latter, the S&P 500 index was down 50% and 45%, respectively. That is, at these recent historical economic and earnings peaks there was no incremental “reward” left at all—just prodigiously painful downside “risk”.

So the question recurs. What possible case is there for sustaining a record PE multiple on the broad market under present circumstances, which are literally fraught with headwinds?

Stated differently, why in the world do the talking heads assume that the cycle can rebound from what will be the third straight quarter of negative earnings comparisons (currently estimated to be -4.7% versus prior year), and then soldier on to bigger and better things for several more years to come?

Yet that kind of mindless open-end optimism is at the very heart of today’s “breakout” narrative. That is, if the economic gods were to give Wall Street a definitive revelation that recession will break out in the next 12-24 months, both silicon units and carbon units would commence selling with malice aforethought.

As it happens, that’s exactly where we are headed. We are already sitting in uncharted territory at month #125 of a business expansion, and one which is literally plagued and barnacled with troubles, failures and accumulated financial rot.

And foremost among the latter is the veritable corruption at the center of the Wall Street narrative. Contrary to the daily bubblevision mantra, main street is not thriving, real wages are punk and corporate profits are flat-lining.

As to the latter, you would never know it from the bubblevision chatter because what they call earnings are 1-2 year forward hockey sticks which never materialize and current period ex-items results which bear only remote relationship to actual economic earnings.

That’s because profits are presented on a per share basis after trillions of cash-flow and balance sheet capacity has been diverted into shrinking the share counts; and to add insult to injury, the ex-items adjustment to reported (GAAP) per share earnings get more egregious all the time.

For instance, back at the above mentioned September 2000 LTM peak in the dotcom era, ex-items earnings were $56.79 per share compared to reported GAAP earnings—the kind you must file with the SEC on penalty of jail time–which posted at $53.70. So the “ex-items” adjustments amounted to $3.09 per share and boosted the actual GAAP number by 5.8%.

By the time of the June 2007 LTM peak, the gap versus GAAP had widened considerably. The latter number was $84.92  per share versus ex-items at $91.47. So now the gap stood at $6.55 per share, meaning that the Wall Street favored ex-items number flattered earnings by 7.7%.

We use the term “talked about” because rarely on bubblevision or the financial press is the actual GAAP earnings number even mentioned. And that’s to say nothing of actual aggregate company profits or the rapidly rising balance sheet risk associated with $6 trillion of S&P 500 share buybacks since 2007, which have falsely goosed per share earnings.

Even then, however, the laziness and mendacity is just getting started. Under the Wall Street earnings narrative there is no past tense in the sense of longer-term trends, and only a fleeting references to the present tense based on the risible game of earnings “beats” against per share numbers which are deliberately sandbagged right before the reporting season begins.

So what actually dominates the Wall Street narrative is the forward ex-items per share number, which is always and everywhere 15-25% higher than the current reporting period—world without end and as if all cycles will be extinguished in perpetuity.

But, but….the forward multiple is always 15.0X to 17.0X .That’s what Wall Street’s hockey sticks are pre-wired to generate.

And besides that, the current Q4 2020 EPS hockey stick would mark a 17% increase from Q4 2018 and sit at an unheard of month #137 of the present faltering business cycle.

So here’s the thing. Actual aggregate corporate earnings have been flatlining for nearly a decade and even per share GAAP earnings reported to the SEC have gone nowhere on a trend basis. Yet the talking heads like so many of Disney’s fabled fake Lemmings just keep charging toward the cliff because, well, 17.0X is perfectly normal.

In fact, even per share GAAP profit growth has decelerated sharply during the current so-called recovery cycle. Thus, on a tax normalized basis, the current LTM rate of $124.00 per share represents a mere 3.2% per annum growth rate over the 11.75 years since the June 2007 peak.