You might wonder whether the numbskulls down in Washington are out of their minds. Even Goldman Sachs now forecasts that the budget deficit will hit $3.6 trillion in FY 2020 or an incredible 16% of GDP; and that the two-year total (including FY 2021) might hit $6 trillion.

Put it this way: It took 213 years and 43 presidents—-from George Washington to Dubya Bush—- to generate the first $6 trillion of public debt. Now a mad man in the Oval Office and a herd of Capitol Hill larcenists will be doing it in just 700 days.

Actually, at the rate they are going we think it could be even worse. For instance, during the first six business days last April, Uncle Sam collected $87.5 billion in tax receipts, but this year during the same six days the take plummeted by 20% to just $70.1 billion; and that occurred before employer withholding payments were fully zapped by the 17 million of initial unemployment claims filed during the last three weeks.

As is self evident from the chart below, that staggering figure well and truly explains what “off the charts” actually means.

In fact, the last three weeks’ initial claims total is 8.5X larger than during the worst three-week period during the Great Recession, which was considered a trauma at the time, but now shows up as hardly a blip in today’s chart-scale.

And there are several more weeks of this to come. By the end of April there will be upwards of 30 million unemployed owing to the Covid-19 lockdowns and then we will see red ink in the Treasury accounts like never before imagined.

Indeed, during the month of April Uncle Sam may be forced to borrow upwards of $1 trillion in a single month!

That’s right. In addition to baseline outlays of $400 billion, there may be an additional outflow of $700 billion for the helicopter checks ($300 billion), an eruption of unemployment insurance payments and the other Everything Bailout disbursements, while at the same time revenues literally evaporate.

And we do mean evaporate. Last year, true-up payments for prior year tax liabilities by mainly higher income taxpayers totaled $105 billion during April and total receipts weighed in at $380 billion. But this year the nice Mr. Mnuchin at the US Treasury, who moonlights as the Donald’s reelection committee finance chairman, gave all those wealthy taxpayers a Covid Hall Pass until July.

So tax day payments around April 15 will be negligible, while payroll withholding will likely drop by 25% and corporate tax collections by 50% or more. In all, April receipts are likely to drop by more than 47% to just $200 billion, representing a plunge that has never before been even remotely experienced by the US Treasury.

Moreover, when it comes to off the historic charts budgetary eruptions, the staggering amount of red ink projected for April will prove to be just spring training for the second half of this year, when the budget numbers will be simply out of this world.

As best as we can tell,  total Treasury receipts are likely to drop by at least 37% from last year’s $1.6 trillion to just $1.0 trillion owing to the tax holiday for employer payroll withholding and the plunge in economic activity and employee income and payroll tax payments.

For instance, Wall Street expectations are now for at least a 25% annualized plunge in Q2 GDP, which would be 3X the record drop during the Great Recession, while hopes for a recovery in calendar Q3 (FY Q4) are fading fast.

So given the Everything Bailout’s provisions for tax cuts and deferrals and the projected off-the-charts impact of the Lock-Down Economy on collections, achieving even $1 trillion of revenue in the second half of FY 2020 will be a push. 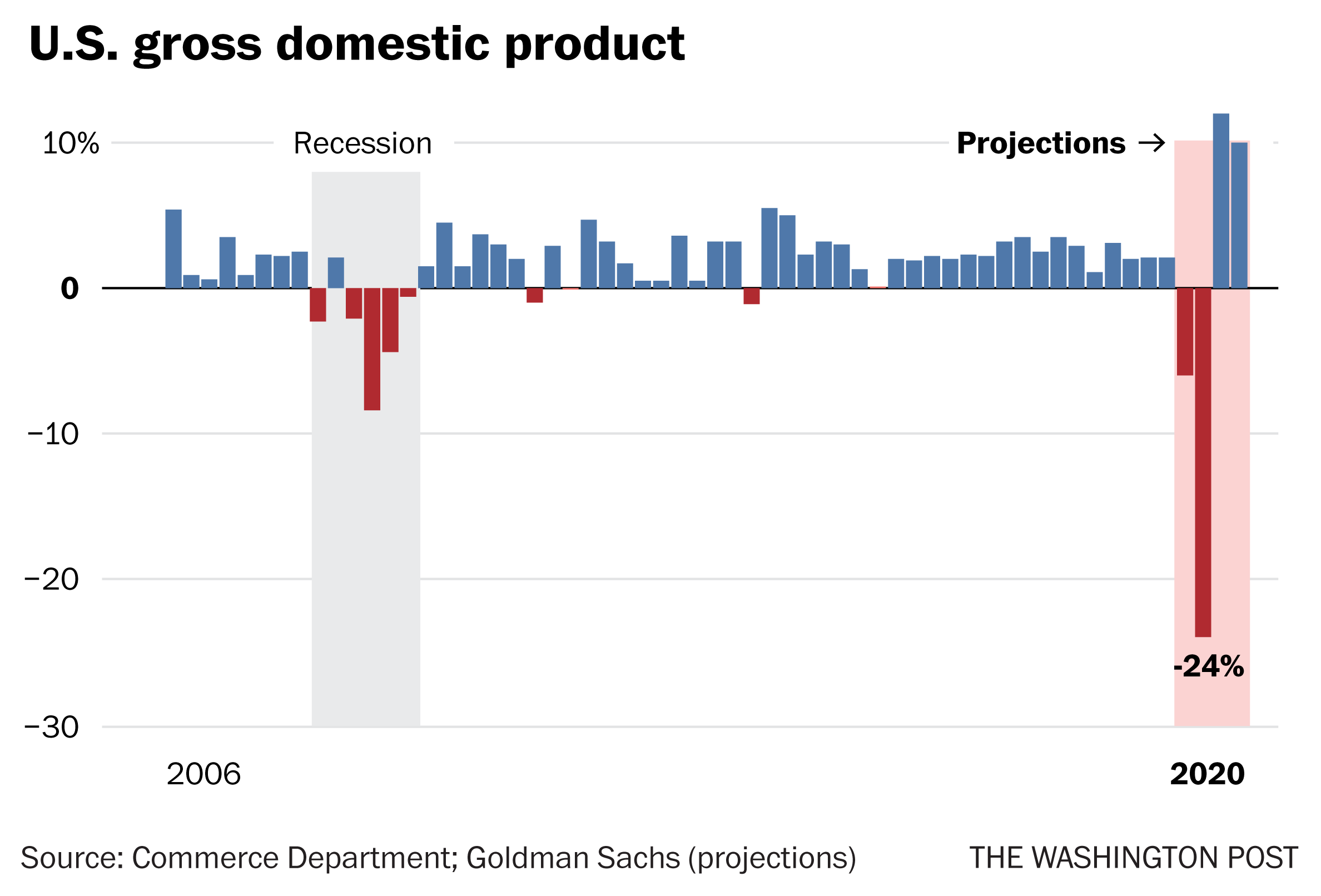 We emphasize the trap-door under receipts in order to contrast it with the rocket ship like eruption of outlays. To wit, baseline outlays of $2.4 trillion plus the Covid-19 bailout frenzy of upwards of $1.4 trillion billion during the second half of the fiscal year will push total Federal outlays toward $3.8 trillion.