Yesterday we noted that the world’s third richest man, Bernard Arnault with a net worth of $108 billion, owed a modest debt of gratitude to the genius central bankers at the ECB.

That’s because he managed to acquire the storied Tiffany & Co for a hugely inflated $16.4 billion, and did it with nearly $17 billion of debt that will hardly cost him a red cent.

To be specific, Arnault closed the transaction two months ago with an $8.5 billion bridge loan from a consortium of banks, $5.75 billion of commercial paper, a $2.75 billion revolver drawdown and not a single share of new common stock.

Subsequently, LVMH went to the corporate bond market where yields have been driven to rock bottom by the ECB’s $150 billion corporate debt buying binge and termed-out most of these borrowings. Interest “cost” for this multi-tranche bond issue ranged from 0.45% for 10-year money to negative -0.057 on short term debt.

All in, therefore, the weighted average interest cost on LVHM’s $16.4 billion purchase was barely 0.75%. That means the annual carry cost of the investment would amount to just $132 million per year.

Yet since Tiffany had $732 million of operating income during the LTM period prior to the transaction, Arnault will end up with a cool $600 million per year on the pre-tax line even if Tiffany & Co fails to increase its income by a single dime.

Our point, of course, is not to quibble with Arnault’s brilliant exercise in financial arbitrage. Rather, it’s to remind that in a sane world no one would fund a huge, premium-priced acquisition with 100% debt, and at rounding error rates of interest.

Assuming even a 65%/35% debt/equity split and normalized interest rates of 4.0% on investment grade corporate debt, for example, would result in a weighted average pre-tax cost of capital of 6.0% or $1.0 billion per year.

That is to say, the deal would have been deeply under water at the 30X net income premium price LVMH paid. In the alternative, LVMH would have paid a much lower purchase price or offered one that was rejected by Tiffany’s board. Either way, the $6 billion windfall which went to Wall Street arbitragers and speculators never would have materialized.

As it happened, however, Arnault paid a crazy price, but got a roaring “amen” in the stock market. That’s because thanks to the ECB’s incineration of normal debt costs, the all-cash deal turned out to be highly accretive to LVMH shareholders on day one.

Needless to say, LVMH has borrowed it way into becoming a giant worldwide purveyor of ultra-luxury brands to mainly the top 1% and 10%.

In fact, the Tiffany & Co deal caps four decades of voracious acquisitions in which Arnault transformed LVMH from a near-bankrupt textile company into the world’s largest luxury goods vendor. It will now have sales of nearly $65 billion per year from a stable of luxury brands that includes Christian Dior, Moët & Chandon, the Venice Simplon-Orient-Express,TAG Heuer, Fendi, Pucci, Bulgari, Hublot, Givenchy, its Louis Vuitton namesake and countless more.

There is nothing wrong with doing well by catering to the very well-to-do, of course, even under the dubious auspices of French capitalism. But Arnault’s latest expansion spree didn’t result in soaring profits from more tony customers procuring more pricey goods at hushed emporiums of luxury.

What happened, instead, is that the central bank fueled casinos chased LVMH’s stock price into the stratosphere—even as its net income loped along at a exceedingly modest pace.

To wit, between 2014 and 2019, the company’s net income rose by just 11%, while its market cap soared by 180%. So what really happened as Arnault piled his balance sheet high with cheap debt compliments of the ECB was that its PE multiple exploded from 11X in 2014 to 28X at present.

Multiple expansion, of course, is what stock markets inseminated with massive amounts of central bank liquidity do. And multiple expansion is what has made the super-rich even richer than they ever imagined.

Not that Arnault was wanting back in 2014 when Forbes rated his net worth at about $41 billion. But in the interim his company PE’d higher by $144 billion, and Arnault took the hindmost. 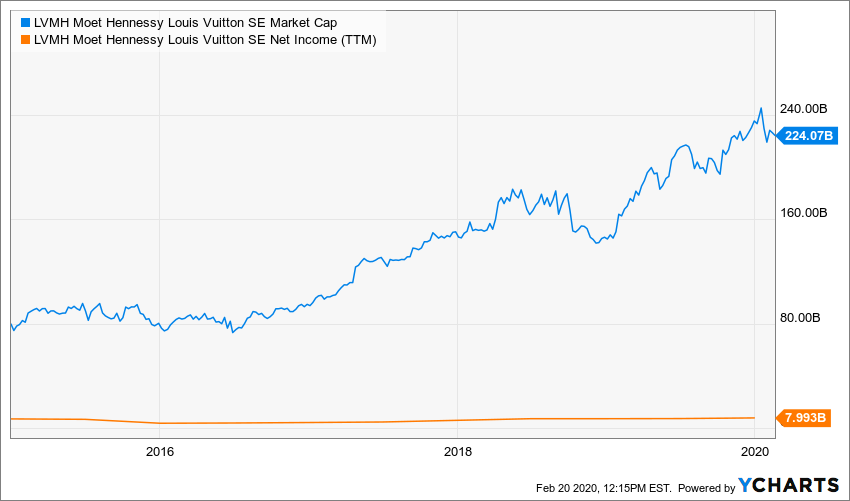 Self-evidently, fostering the serial acquisitions of the world’s largest luxury goods company and the $106 billion fortune of Bernard Arnault is about as far from any plausible central banking objective as is imaginable. But that’s exactly where Keynesian central banking in the eurozone, the US and everywhere else on the planet leads.

Today’s groupthink befuddled central bankers believe like the man with a hammer that every economic problem–and non-problem, too—is a nail that can be battered away with lower interest rates. That’s why the have pushed yields on sovereign debt below zero and forced yield-hungry asset managers into desperate bidding wars for investment grade corporate debt and even junk bonds.

In the case of the recent LVMH offering, for example, there were euro 20 billion of orders for the euro 7.5 billion tranches, some of which paid negative yields and all of which, as indicated above, were priced at 0.45% or lower. With even Europe’s alleged low-flation CPI running at 1.4% such yields are flat-out madness—yet the offering was oversubscribed by nearly 3:1.

Accordingly, investment grade corporates had already been driven to a less than 60 basis points two years ago, and in recent months have dipped into sub-zero territory as well. So it is not surprising that empire builders and financial engineers like Arnault have swooped into the bond markets to scoop up tens of billions of financing on the ultra cheap. 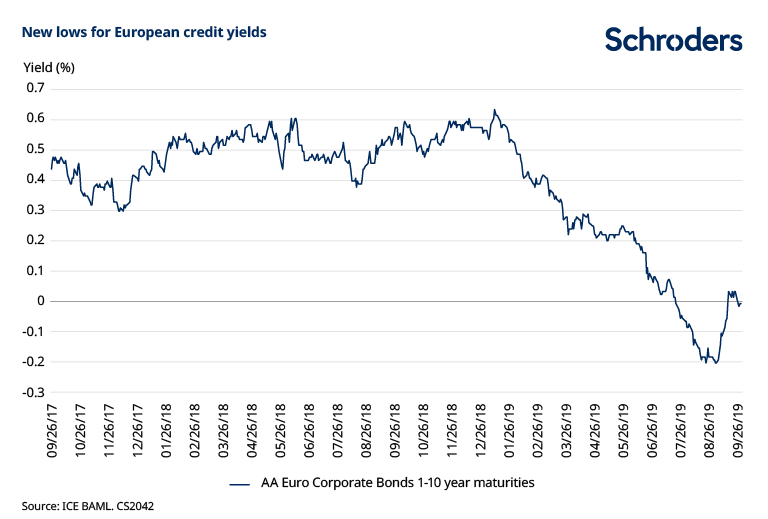 But that’s actually not the half of it. In honor is his recent (and deserved) pardon, we must note that junk bond king and pioneer, Michael Milken, named them “junk bonds” for a reason: Namely, that they were and are extremely risky, and therefore must bear “high yields” in order to compensate investors for the inevitable losses which go with the territory.

Indeed, back in the day when your editor was in the leveraged buyout business at Blackstone in the Milken era we were tickled pink to sell at issue that didn’t require a double-digit coupon.

No more.  In the European junk bond markets, yields are now just 2.7%, which after subtracting inflation leave virtually nothing to cover the inevitable losses. Yet yields have been flushed to such insane levels because fund mangers are desperate for any kind of yield at all, and because the ECB itself is now buying junk bonds are part of its corporate bond purchasing program. Back in Milken’s day, of course, he and his Drexel cohorts at least made a mildly plausible case that these junk bond financings were being used to finance “growth companies” that Wall Street’s white shoe underwriters eschewed; and that they were therefore doing god’s work fostering investment, production and jobs.

Today, of course, the bark has been stripped off. The overwhelming share of junk bond financings go to finance LBO’s and M&A deals. That is, they finance the strip-mining of corporate balance sheets and the inflation of equity prices.

Stated differently, central banks not only have an interest rate hammer, but it is a crude tool at that.

In theory, lower long-term interest rates are supposed to fuel home construction and mortgage issuance and business investment in plant, equipment and technology. But there is a huge slippage in the transmission belt between the bond pits and the economy’s stock of productive investment.

What happens is that artificially cheap money fuels Wall Street carry trades and leveraged speculation, which, in turn, fuel fabulous equity valuation bubbles. Then the latter become powerful financial magnets which induce business managers and the C-suites to dive headlong into financial engineering.

Needless to say, there is a resulting yawning time mismatch. Stock buybacks and M&A deals most often generate immediate economic gratification to stock prices and options values because they reduce the share count in the former case and appear to be “accretive” in the latter case owing to the ultra-cheap after-tax cost of debt, per the LVMH saga above.

By contrast, investment in plant, equipment, technology and intellectual capital takes time to bear fruit, and is exactly why healthy capitalist prosperity crucially depends upon honest pricing of capital and money and upon accurate economic signals to managers and entrepreneurs.

So there is a fundamental reason why Wall Street bubbles are becoming ever more egregious and why main street growth is slouching ever closer to the flat-line. Namely, the now demonstrated consequence of Keynesian central banking and the extreme and prolonged repression of interest rates which it entails is the perverse financialization of the economy.

What that means is that just like the case of LVMH market cap and Arnault’s fabulous wealth, you get systematic, unrelenting PE inflation. That is, the valuation multiples of financial assets rise ever higher, which, in turn, encourages even more allocation of capital to financial engineering and even more misallocation of capital to speculative waste—the $14 billion Telsa has raised on Wall Street since 2008 being a prime case in point.

The problem with financialization, of course, is not merely that it undermines sustainable main street growth and prosperity. The real problem was evident on the Democrat debate stage last night when the contenders took turns plugging their wealth taxes and trashing the one billionaire on the stage for his ill-gotten billions.

In fact, they had a point but for the wrong reason. Mike Bloomberg’s net worth had soared from $3 billion in 2008 to $60 billion by the time he got to the Nevada debate stage last night.

Needless to say, the Bloomberg terminals, data bases and information systems have not gotten 20X more valuable in the last 12 years. Like the rest of the 0.1%, 1% and 10%, respectively, the central banks have massively inflated his PE multiple.

Yet where is it all leading?

Not to the source in the Eccles Building and its central bank confederates around the world, but to populist taxation and income redistribution policies which will eventually send badly impaired capitalist economies reeling toward the drink.

When 90% of the stock is owned by the top 10% of households, the demagogues and statists will eventually rule the day. 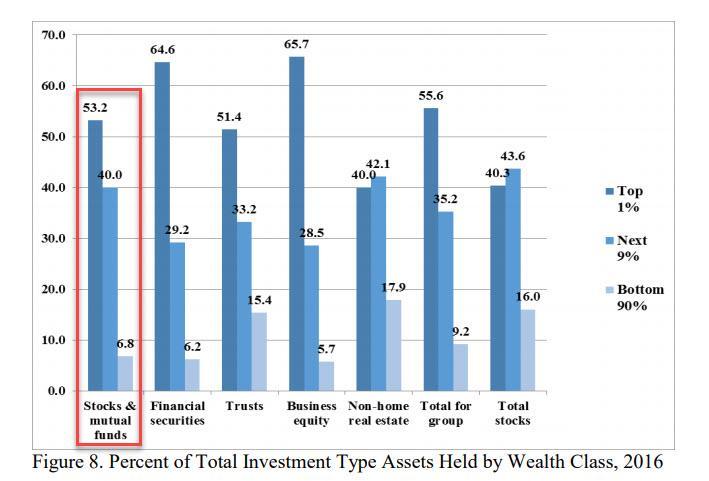 But then again, how could it be otherwise. The chart below is the single most important metric generated by the Keynesian central bankers who now dominate and pervert the entire financial system and the underlying main street economy upon which it sits.

Yet another monthly Fed meeting just passed and the minutes showed the Fed heads congratulating themselves for producing a “strong” labor market and an overall economy basking in a ‘good place”.

As shown in the charts below, they have fostered an financial malignancy and political time bomb—both of which are fixing to blow. 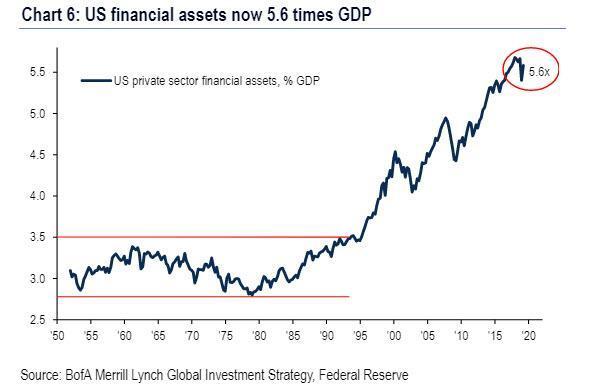 Did the Fed heads take note of the chart below in their self-congratulating “minutes” yesterday?

Yet with total market cap at 157% of GDP—and even more extended than at the dotcom peak in the spring of 2000—you have to wonder about what they are waiting for.

Unfortunately, the answer is not far away. 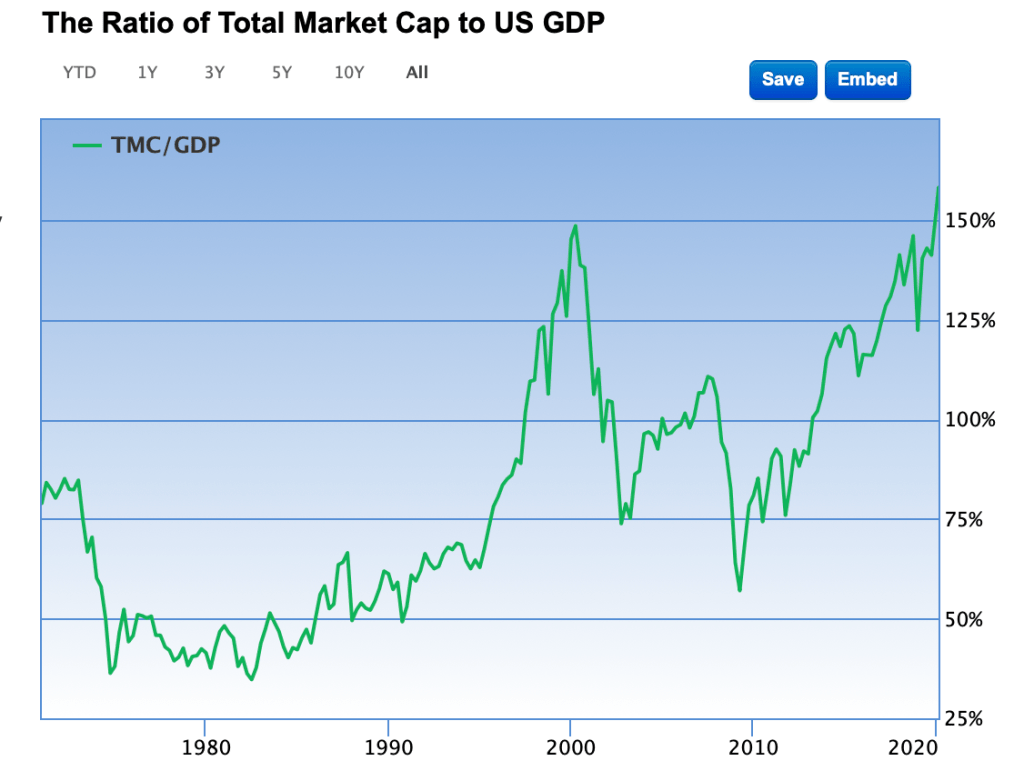 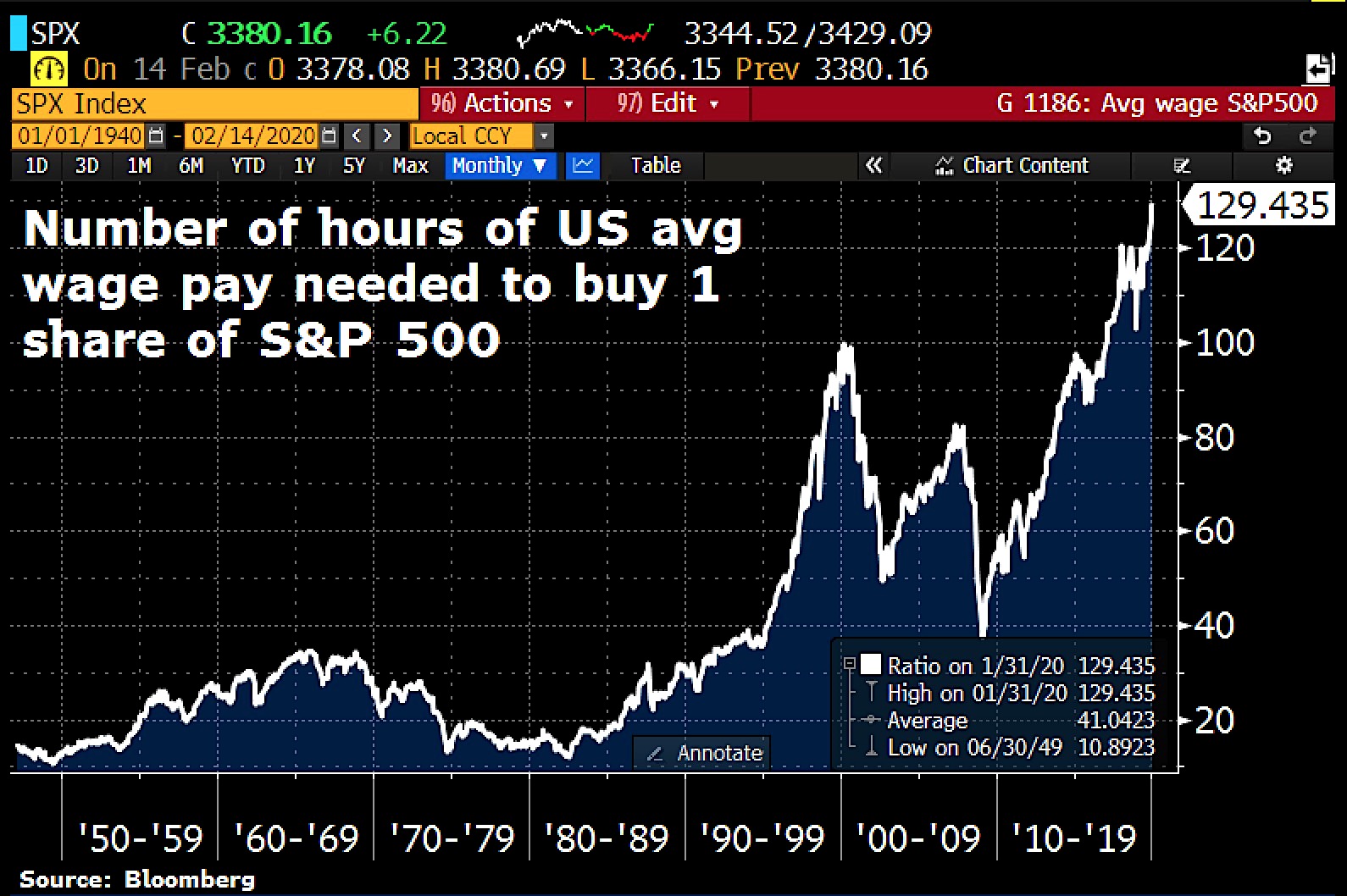