Then again, this is how Lyft rolls. On a two-year basis since 2016, its revenues have grown by $1.82 billion, while expenses have soared by $2.05 billion.

Of course, in the rarified world of tech start-ups, it’s all about growth metrics, not profits. In fact, the entire precinct of the Bubble Finance world occupied by what are known as Unicorns (because they are valued at more than $1 billion) is essentially a profits-free zone.

Indeed, it would appear that this very exemption from profit making is what enables the Unicorn Farm to thrive. After all, if these VC funded “burn babies” are free to spend themselves senseless, they can, in fact, often buy bigger and bigger growth metrics such as engagements, active users, monthly riders, and, when all else fails, even revenues.

As indicated below, in the US alone there were about 30 Unicorns collectively valued at $50 billion back in 2012-2013. Five bubblicious years later there are now 138 Unicorns valued at $500 billion in the US, and more than 265 valued at $860 billion on a world wide basis.

As of various funding rounds during 2018, the five largest US Unicorns had rarely sullied their records with positive net income, but they did put some pretty hefty scores on the “private” valuation board. This included Uber at $72 billion, WeWork at $45 billion, Airbnb at $38 billion, JUUL Labs (e-cigarette maker) at $38 billion and Stripe at $23 billion.

That amounted to $216 billion of market cap between them, resting on combined 2018 losses of about $10 billion.

Nor does the absence of profits put any particular crimp on the fabulous growth of “valuation” on the Unicorn Farm. That’s because “valuation” is just a scribbled number that a cabal of VC firms agree to cross-out and mark-up substantially higher every time a portfolio company gets a hankering for more cash.

For instance, the above referenced $72 billion value for Uber was as of its August 2018 funding round, and since then it has posted another quarter with nearly $1 billion of losses. But never mind, it’s now lining up at Unicorn heaven’s gate—that is, the IPO market—-for a rumored valuation of $140 billion.

What we are saying is that the Unicorn Farm—from which Lyft emerged today at a first trade valued at roughly $30 billion—is just another of the malinvestment sink holes of waste that have been fostered by Keynesian monetary central planning. And as is evident from the chart below, this distortion intensifies with bubble cycle duration.

In effect, the longer the Fed and other central banks keep the public equity markets suspended from a sky-hook, the more audacious the VC industry becomes in just capriciously marking these Unicorns to higher and higher “valuations” based on the ultimate greater fool theory. That is, the notion that the Fed will never let the Wall Street bubble stop expanding and that, therefore, there will always be an army of retail mullets waiting to scoop up the merchandise at an IPO offering down the road.

Stated differently, the central bank underwritten 10-year spree of buy-the-dip gambling in the public equity markets has created what amounts to a toxic financial petri dish in the VC space.

That is, the VC industry has morphed into a place were tens of billions can be wasted on foolish ideas and cockamamie business models because there is no profits discipline; there is no shut-off valve on the flow of capital and cash to winnow out failures, which is how a healthy free market efficiently allocates scarce capital and fosters real wealth-producing innovation.

Indeed, as was remarked over and over during bubblevision’s nonstop coverage of the Lyft heist today, the gestation period for start-ups have been drastically elongated relative to all prior history.

But rather than the godsend of “mature-scale IPOs” that the talking heads kept jabbering about, what this really fostered was a devil’s workshop which assembled massive companies with tens of thousands of employees and billions of annual spend on salaries, rents, support services, marketing and advertising, transportation, communications and technology etc. that has escaped the profit-and-loss discipline of the free market.

That means there are big chunks of activity out there that are recorded as “jobs” and “GDP” in the “incoming” data flickering on Wall Street and Fed Bloomberg terminals, which are exactly the opposite: Namely, malinvestments and waste which will eventually be liquidated and show up as more dead weight loss on the economy, and more gumming among the Keynesian PhDs as to why the US growth rate has been slinking lower and lower over the past two decades.

Worse still, the primary reason for buying Lyft at today’s absurd IPO price according to Bubblevision was that there is a scarcity of stock to buy. In fact, one talking head smugly pointed out that the Wilshire 5000 now consists of just 3,700 companies because there have been so many mergers and stock buybacks/liquidations.

Of course, the reason for this alleged scarcity of stock is that the Fed’s Bubble Finance policies have caused a huge share count shrinkage, heavily funded by cheap debt and the diversion of corporate cash flows into financial engineering.

So in order to make up for one financial distortion stemming from dishonest money and falsified financial asset prices, the casino is being urged to buy hideously over-priced shares now on offer from the Unicorn Farm.

Yet the whole thing is make believe. The march from $50 billion to $500 billion of Unicorn market cap shown below happened because nothing stopped the VC sowing circles from marking their portfolio companies higher and higher.

It amounted to counterfeiting on a grand scale because during the same 5-year period virtually none of these Unicorns—certainly not Uber or WeWork—-proved that they have a sustainable, profitable business model, and in fact actually drifted into deeper and deeper losses.

The perverse dynamics at work in the Fed-fostered Unicorn Farm are more than evident in the Lyft numbers that have been made public. During the 2016-2018 period, the company spent just under $6 billion attracting and servicing drivers and customers thru its own P&L; and left another $11 billion of fares on the table as the drivers’ share of the take.

So, well, yes you can generate a lot of “rides” when you pump out nearly $17 billion inriding around money to the participants in the scheme. And as shown in the chart below, the per quarter ride count has increased by 6X between Q1 2016 and Q4 2018.

But here’s the thing. For all the ballyhooed growth in the “rides” metric dutifully passed-around the VC sowing circles (i.e. they were “sowing” market cap), this awesome chart isn’t at all that when it comes to proving up the business model and the pathway to profitability.

Needless to say, it has been long known that attempting to make up for shrinking margins with rising volumes just doesn’t cut it in the real world of sustainable business enterprise. But as we said, the Unicorn Farm is a place where they make gist for the greater-fool mill, not profitable enterprises.

Indeed, we are not sure that the scam here even warrants the “fools” prize. The reason that cost per ride are not “scaling”, but actually increased between 2017 and 2018 is that by its own admission the company was throwing everything but the kitchen sink at drivers and riders in order to gain market share from Uber and thereby show booming “growth metrics” for the IPO.

That worked at one level, as in Q4 2018 by one estimate Lyft grabbed a 39 percent share of the United States ride-sharing market compared to 22% in 2016.  Of course, that estimate comes from the Japanese e-commerce company Rakuten, which is a multi-billion investor in Lyft.

Still, in light of the deep discounts being offered ahead of the company’s IPO, even its attorneys forced it to include this warning in its SEC filing: warned:

“We believe that much of the growth in our rider base and the number of drivers on our platform is attributable to our paid marketing initiatives.”

So much for making up for missing margin with more volume!

As it happened, the above illustrated upward march of the “growth” metrics on the Unicorn Farm did accomplish its job. With literally dizzying speed, each successive funding round by Lyft was marked higher by billions per throw.

For instance, the “C” round in the chart below happened in May 2013 when the Unicorn Farm was just getting up a head of steam after the trauma of the financial crisis. Accordingly, the company was valued at just $336 million, meaning that at today’s opening bid, Lyft’s valued had been lifted by a cool 89X.

Then, two-years later in the “E” round of May 2015, its value had soared to $2.8 billion or by 8.3X. Yet had anything been proven during that 24 month period with respect to a profitable business model, not just rising metrics?

No, it had not. Nor had anything changed three years latter, when the VC sowing circle marked it up to $15.1 billion in the “I” round last June. And that’s to say nothing of the growth to about $22 billion at the IPO filing’s indicated range, or $24 billion at last night’s offering price or $30 billion on today’s opening bid.

The irony, of course, is that the Fed heads who have fueled and enabled this madness insist they espy no signs of financial excesses, bubbles or anything untoward at all.

Yet, if they can’t see it here, they are just flat-out blind or stupid, as the case may be. 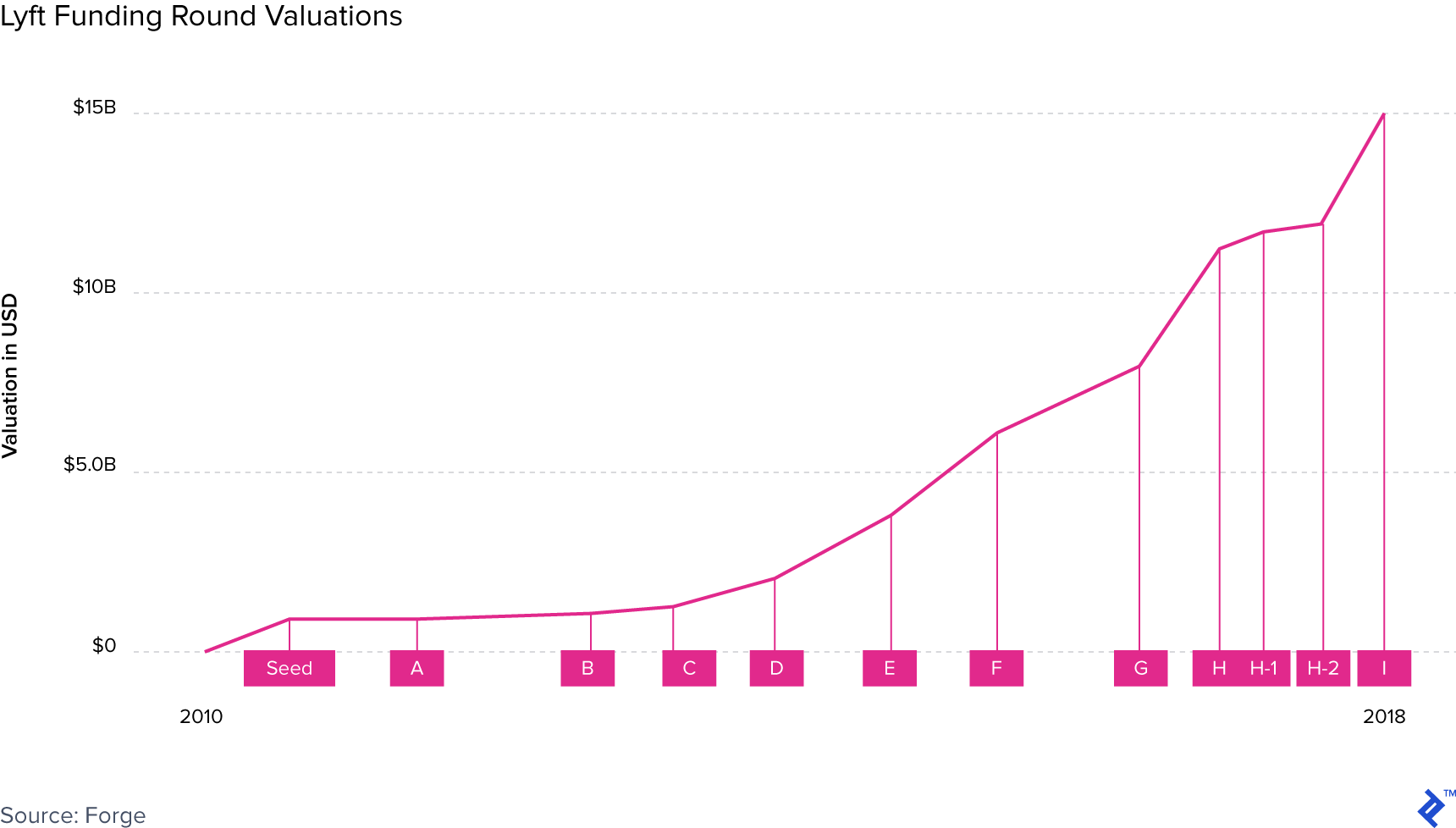 At the end of the day, you can’t find a better end of the cycle bell to wring than Lyft. As is evident in the diagram below, even the reasonably prudent analysts who did the work behind this chart, and who actually recommend buying the stock for a punt, think it won’t be profitable until 2026.

That’s right. Lyft has no proprietary technology and no defensible competitive moats—only the gale force competition of the immensely larger Uber and a growing passel of new entrants in the ride hailing space.

A few weeks ago when we appeared on a bubblevision show, the host was shocked after we averred that the market discounts nothing except the machinations of the Fed, and that what passes for valuation is simply the noisy scampering of the chart-monkeys from one technical perch to the next.

At least that much was validated again today. To put $30 billion of market cap on the scenarios below amounts to some pretty unhinged scampering, indeed.

Still, just yesterday, St Louis Fed President Bullard reminded of how we got here. Said Bullard after the Fed’s bloated balance sheet of $4.5 trillion has been modestly trimmed to $3.8 trillion”

‘Fed policy normalization has probably gone as far as possible”.

As we will show in Part 3, that is blithering nonsense based on the latest Fed tommyrot called “r-star” or the neutral rate of interest.

This is supposed to be some kind of single point north star that tells our monetary central planners exactly what the optimum money market rate is, and therefore how much their current fed funds target is above or below the benchmark, thereby adding restraint or accommodation to the macro-economy.

The problem is there is no scientific value for r-star, nor have the economic gods delivered one to the FOMC. In fact, they keep changing r-star to justify keeping the money market rate lower for longer, and holding off the day when the casino is finally consumed by the mother of all hissy fits.

If today’s madness with the Lyft IPO says anything, therefore, it is that this day can’t be too far down the road, and that when it comes the inferno on the Unicorn Farm will be one for the ages.