The main trouble in America is not overt racism or even simmering racial animosity. The real evil is the relentless aggrandizement of state power, which among its many ills is the rise of the Nanny State—a conflation of too many laws, crimes, cops, arrests and thereby opportunities for frictions between the state and its citizenry and for abuse by the gendarmes vested with legal use of violence.

The nation is now enthrall to an emotionally charged symptom of this rogue Nanny State—the unjustified murder of unarmed black citizens by the police. Among the most recent notorious cases, of course, are George Floyd for allegedly passing a counterfeit $20 bill, Eric Garner (NYC 2014) for selling un-taxed cigarettes, and Rayshard Brooks for falling asleep drunk in his car at a subsequently incinerated Wendy’s in Atlanta.

Nor are these notorious cases aberrations. During the recent past there were 38 such police killings of unarmed black citizens in 2015, and then 19, 21, 17 and 9 during 2016 through 2019, respectively. That’s 104 black lives lost to the ultimate abuse of police powers.

Of course, the number should be zero. There is no conceivable excuse for heavily armed cops—-usually working in pairs or groups—to murder lone, unarmed civilians, regardless of race or anything else.

Overall, 302 unarmed citizens were killed by the police during the last five years, with the balance in the chart below accounted for by 71 deaths among Hispanic and other victims. That is, the real issue is illegal and excessive police violence, not racial victimization.

Indeed, as we show in Part 2, the fact that 34% of these police killings involved black citizens compared to their 12% share of the population is not primarily a sign of racism among police forces. It’s actually evidence that the Nanny State, and especially the misbegotten War on Drugs, is designed to unnecessarily ensnare a distinct demographic— young, poor, often unemployed urban citizens— in confrontations with the cops, too many of which become fatal.

Stated differently, the Nanny State tends to be racist in effect, even if that is not necessarily the intent of the crusaders and zealots who have launched the state into anti-liberty wars on drugs, vice and victimless inequities and peccadillos. 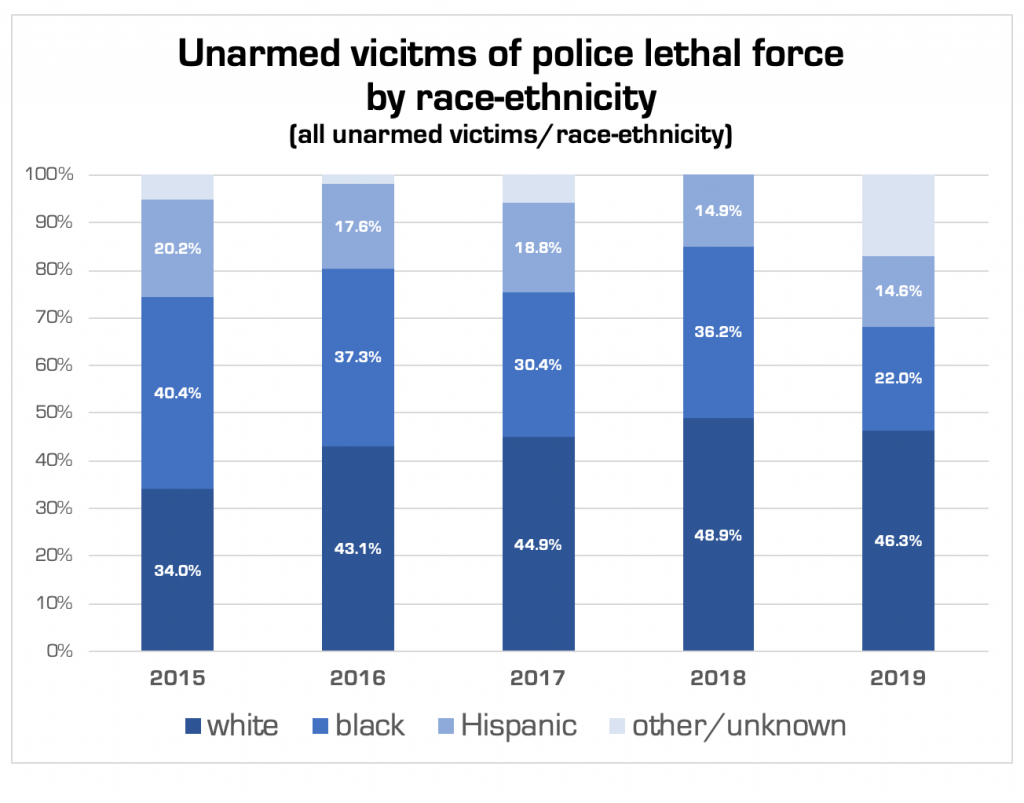 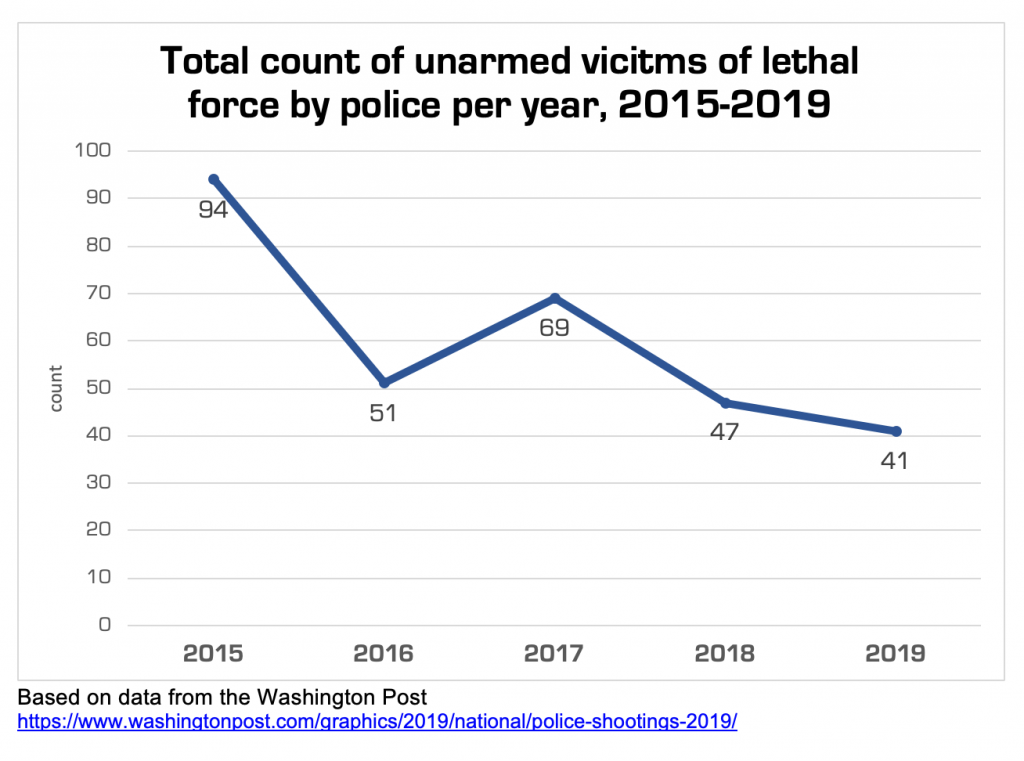 Then again, the above charts are only part of the story. As it happened, a total of 4,558 citizens were actually killed by police over that period, but according to the DOJ statistics, fully 93% or 4,256 of them were armed.

So viewed in context, the unarmed/I can’t breathe victims account for only a small fraction of lethal violence between citizens and police, and there really isn’t much difference in the unarmed/armed ratio among racial groups. To wit, over the 2015-2019 period as a whole—

But here’s the thing. This data does not really support either the Sean Hannity/Law & Order fulminations of the Foxified Right or the 400 years of racism and victimization mantra of the CNN/progressive Left.

Contrary to the Left, 93.4% of the dead victims of police violence were themselves armed; and the 91.1% incidence among blacks is not meaningfully different than the 95% rate among whites and Hispanics. The chart below shows the inverse—the share of victims of police deaths who were not armed. 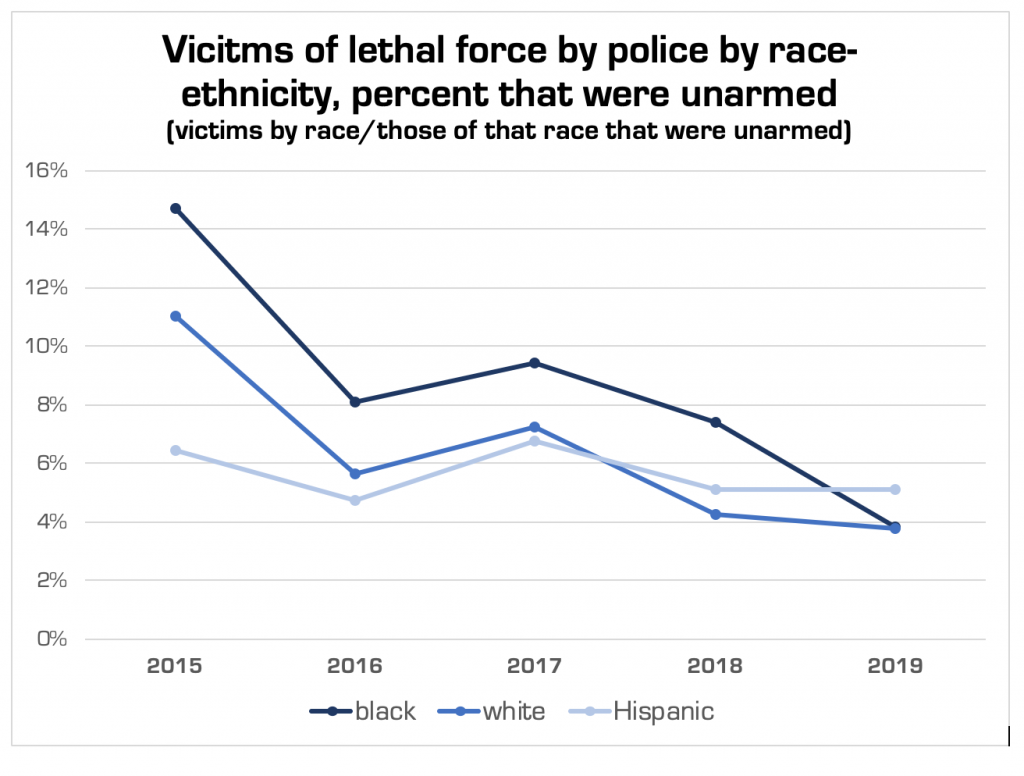 At the same time, the above statistics do not prove that the cops were mostly right or justified, either, as per the Law and Order Howlers. As we shall explore below, the real issue is did 4,558 citizens end-up on the losing end of police fire because they were hardened criminals and sociopathic threats to society or were they set-up by an overreaching legal system that puts too many citizens and police officers alike in harms’ way?

But preliminary to that, it needs be said that the rightwing mantra about police as heroic victims of criminal violence doesn’t wash, either. They have the overwhelming firepower in these instances of police-on-citizen violence as attested to be the facts regarding felonious deaths of law enforcement officers during the same five year span.

It turns out that during 2015 through 2019 there occurred 256 police deaths in the line of fire, bringing the total of police and citizen deaths in these encounters to 4,814. That is to say, the cops won 95% of the time, as well they might given their overwhelming superiority in arms, training, back-up support and legal immunity from being too quick on the trigger finger.

In this context, it should be noted that police deaths are sometimes reported at much higher levels—-a total of 492 over the last five years rather than the 256 indicated above. However, exactly half of that larger total is considered accidental or non-felonious and includes traffic cops stepping into the wrong lane and even heart attacks in the squad car resulting from too many stops at Dunkin’ Donuts.

So the question recurs as to why there were 4,814 fatal encounters between police and citizens during the past five years.

We think the answer starts with a staggering statistic. Namely, the fact that there were 10,310,960 arrests in the US during the most recent year (2018) excluding traffic violations.

That’s 3,153 arrests per 100,000 population including babies, grannies, toddlers, tweeners, the disabled, the infirm and religious leaders including nuns, priests, preachers, rabbis and imams.

So when you talk about the subset of the population which actually get arrested with high frequency and accounts for most of these arrest totals–—young men between 16 and 35 years—the true arrest rate is far higher; it’s upwards of 15,000 per 100,000 population.

Either way, these arrests rates are far out whacko. Americans are not nearly that lawless, even when you allow for the chronic rotten apples in the population and the anti-social propensities of some young men.

And that hints at the real problem: We have way too many crimes and way too many cops who are way too heavily armed attempting to enforce laws that are not really the business of the state in the first place. In the most egregious kind of example, Eric Garner was apprehended and killed for selling “loosies”, or cigarettes one a time.

In fact, there are an estimated 300,000 Federal laws and regulations whose violation can lead to prison time; and when you throw in state and local jurisdictions, which historically have had an affinity for outlawing victimless crimes and the infinite forms of human vice, the total number of criminal offenses in America is surely well into the millions.

That’s why a disaggregation of the FBI’s UCR (Uniform Crime Reports) arrest statistics for 2018 tell you all you need to know about why the nation’s police forces are way over-funded and why a huge amount of confrontation and friction—including violent encounters––between citizens of all races are unnecessary.

In a word, some citizens sometimes can’t breathe their last breath because in far too many instances liberty can’t breathe in today’s unhinged Nanny State, either.

Self-evidently, the legitimate law enforcement function of the state is protection of the life and property of its citizens. But when you look at the FBI’s own national arrest data for 2018, it appears that only about one-quarter of arrests were clearly pursuant to those core functions, meaning that the overwhelming bulk of arrests–-7,621,232-–were for drugs, gambling, prostitution, disorderly conduct and the like.

Among the core law enforcement functions, the 26% of all arrests broke out as follows:

Even when you drill down in these categories, however, the reality of way too many cops is evident. There were just 11,970 arrests for murder and negligent manslaughter in 2018 across the entire USA at all levels of law enforcement. Clearly, these are the most violent and heinous of violent crimes, yet they amounted to just 2.2% of all “violent crimes” reported via the UCR and a mere 0.1% of all arrests by the police.

To be sure, nearly 1.6 cops for every annual arrest in these four core functions sounds more than a bit lop-sided, but there are some additional arrests that add to the legitimate work loads of the police. These include the following crimes and their share of total arrests:

Needless to say, these are all serious crimes that need to be enforced for the protection of life and property. But by their very nature, the vast bulk of the arrests in the above five categories do not ordinarily involve violent criminals, nor does their enforcement require combat-strength arms and tactics among police forces.

DUI arrests, for example, overwhelmingly involve citizens engaging in socially reckless behavior, but not habitual criminal activity. A detailed study awhile back, for example, showed that 65% of arrests resulted in no correctional supervision at all and another 27% of cases consisted of individuals sentenced to probation or jail who had no prior arrest records for crimes other than DUI. By contrast just 8% of DUI arrestees had prior non-DUI criminal records, and even then most of them were for lesser offenses.

The unlawful taking, carrying, leading, or riding away of property from the possession or constructive possession of another. Examples are thefts of bicycles, motor vehicle parts and accessories, shoplifting, pocket-picking, or the stealing of any property or article that is not taken by force and violence or by fraud.

Nevertheless, larceny-theft accounts for 76% of all crimes against property reported in the UCR arrest data for 2018.

So the question recurs. If the nation’s huge and heavily armed police forces are involved in the arrests of core criminal in just 5% of their apprehensions and are dealing with serious but mainly non-violent criminals in another 21% of arrests dealing mainly with burglaries, drunk drivers, car thieves and arsonists, what are they doing the rest of the time?

Here is a spoiler alert to be amplified in Part 2. The single largest category of arrests in 2018 was for drug abuse violations, which totaled 1,654,282.

In fact, while total arrests in 2018 were no higher than they were in 1977 despite a 100 million/50% growth in the US population, and had actually dropped from a peak of nearly 13 million in 2006, the opposite trend was extant in the case of War on Drugs arrests.

As shown by the chart below, arrest in 2018 were nearly at peak levels and were up by more than 171% since 1977—the vast majority of which are made for drug possession generally, and marijuana possession most often.

Not surprisingly, the next largest arrest category after drugs is one called “other assaults” for which 1,063,535 arrests were made in 2018. Yet the FBI’s own definitions raise considerable doubts as to why these are even a matter of law enforcement by the state:

Other assaults (simple)―Assaults and attempted assaults where no weapon was used or no serious or aggravated injury resulted to the victim. Stalking, intimidation, coercion, and hazing are included.

Then, of course, we have all the victimless and vice crimes, including the following number of arrests:

The latter huge number tells you all you need to know. The UCR lists 27 enumerated categories of crime including all of those itemized above–plus the usual suspects like fraud and embezzlement for which there were about 135,000 arrests in 2018. Yet when the whole lists is exhausted, 32% of arrests occurred for crimes that are so minor even the FBI is embarrassed to enumerate them:

All other offenses—All violations of state or local laws not specifically identified as Part I or Part II offenses.

So, yes, we do think there is way, way to many crimes and cops, and that de-criminalizing and de-funding law enforcement are the only route to reducing police violence, as we will amplify in Part 2.

Better that police did not spend 90% of their time on matters other than protecting the life and property of the citizenry; and in the process turning the Nanny State into an instrument of violence against citizens, and especially the young, poor and minorities who become ensnared in its vast over-reach.