Of course it makes sense. Not!

The S&P 500 opened the new year and decade at 3258 or 37% above the Christmas Eve lows of 2018 and 23% above the level of March 2018 (2640). The latter occurred at a time when the corporate tax cut sugar high was cranking through the GDP statistics and before the Donald had launched his $79 billion tariff bludgeon against $360 billion of Chinese imports.

That is, since March 2018 the incoming domestic data has steadily weakened, the Trade War has gotten a lot worse and global trade and PMIs have literally punched through the flat-line. So it ain’t prospective growth and profit gains which are levitating the stock markets. 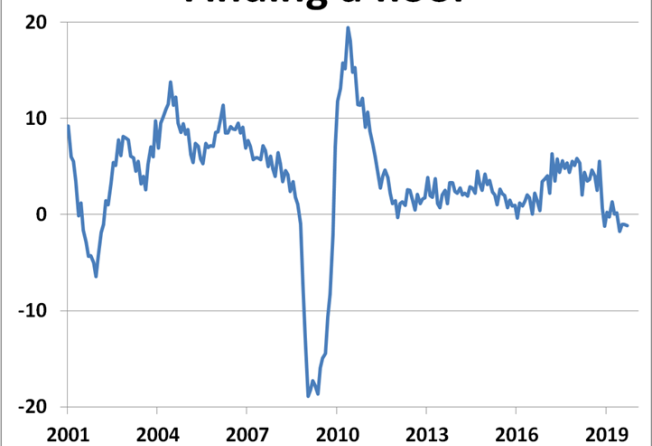 But we revert to the March 2018 date for a reason. Namely, at that point the hockey-stick crowd on Wall Street was predicting “operating” earnings of $172.62 per share for 2019, thereby valuing expected year-forward earnings at 15.3X.

Forgive our cynicism, but like clockwork the Wall Street analyst consensus on a one year-forward earnings basis always reflects a 15X PE ratio. The fly in the ointment, however, is that the “E” almost never materializes, and this time was no exception.

Needless to say, there is only one way to square that circle: Wall Street has once again made up for dwindling “E” with a pumped up multiple. In fact, at today’s close the PE multiple is up by 34% from its 21 months ago level to 20.6X.

But as they say on late night TV, there’s more. The current 20.6X PE is derived from so-called “ex-items” earnings, or the kind that CEOs and CFOs go to jail for if they file such adjusted and manipulated numbers with the SEC.

At the current moment in time, the actual GAAP LTM figure for September 2019 is just $132.90 per share and the street’s GAAP estimate for the full year will be lucky to hold at $140 per share. So in the real world the broad market opened the Turbulent Twenties at somewhere between 23.5X and 24.5X honest-to-goodness GAAP profits.

At any time in the business cycle that ain’t even close to cheap, but at month #127 of history’s most tepid and unsustainable recovery, it’s downright absurd.

Once upon a time, the stock market was a discounting machine and stock prices reflected all that was known, feared, imagined, hoped for and divined among millions of market participants. But today it all reduces to a single variable: Namely, the money-pumping actions of the Fed and other central banks.

Indeed, the latter is the only thing that has changed for the “better” since the above mentioned dates in 2018. Back then the Fed was finally on a normalization path with periodic rate increases expected at least through 2018 and 2019; and the Fed’s belated balance sheet shrinkage operation, which finally commenced in October 2017, was purported to be on “automatic pilot” as per Powell’s very own “read my lips” equivalent.

Needless to say, the 19.9% stock market drawdown of late 2018 vaporized whatever shred of backbone still existed in the Eccles Building, and the Oval Office, too. Trump quasi-surrendered on his Trade War, while the Fed heads jettisoned any remaining pretense of either backbone or brains.

Not only did it cut rates three times back to a funds rate of 1.55% or essentially 80 basis points below the LTM inflation rate (16% trimmed mean CPI), thereby gifting the Wall Street carry traders yet again, but it literally flooded the bond pits with such malice aforethought as to cause even the Bernank to blush.

As shown below, during the final 105 days of  2019, the Fed pumped up its balance sheet by the staggering sum of $405 billion, purchasing $170 billion of “not QE” T-bills and adding another $235 billion of TOMOs (temporary open market operations via overnight and short-term repos), which all except the lobotomized talking heads of bubble vision recognize to actually be POMOs (permanent open market operations).

Folks, POMOs are Fedspeak for money printing and monetizing the public debt. And on an annualized basis its is now occurring at a $1.4 trillion rate!

Since that exceeds even the frenzied money-pumping of 2008-2009, the question recurs: How is it that the casino gamblers have re-rated the market PE upwards by 34% to the veritable nosebleed section of history, while the Fed is pumping money like there is no tomorrow?

The short answer is mindless ritual incantation, not the claim that the geniuses in the Eccles Building have discovered a rat in the money market plumbing and have been quietly working to dispatch it.

Actually, these half-wits are so fixated on enforcing their idiotic Fed funds target at 1.55%, that they have become the monetary equivalent of baby seal hunters bearing clubs.

The central banking folly pictured in the graph is owing to the fact that their Fed funds target relates to a vestigial market indicator that Bernanke & Co destroyed more than a decade ago. Today the Federal funds market trades practically by appointment with daily volumes of hardly $50 billion, and most of that is accounted for by the rather pointless cash management operations of the Federal Home Loan Banks.

On the other hand, the real money market includes the multi-trillion tri-party repo system, commercial paper and other short-term unsecured credit markets, and taken together it is upwards of $5-$10 trillion in size in the US alone.

And by the true and inescapable economics of fungibility and arbitrage, any excess of demand anywhere in this vast system will give rise to short term rate spikes, which is exactly why the repo ruction occurred during mid-September.

So call it Whack-A-Mole or clubbing baby seals or what you will. But the very idea that 1.55% has to be enforced to the second decimal place across multi-trillion money markets amounts to Irrational Malfeasance on Steroids.

Of course, there is a very good reason why the Fed has found itself beleaguered by uncooperative, squealing baby sells. To wit, the fiscal departments of Washington have been spending and borrowing with reckless abandon.