There are few market mavens who tell it like it is more succinctly and pungently than Gary Kaltbaum—so here’s his take on yesterday’s load of hogwash from the Fed. What passes for thinking among that power-drunk camarilla of lame-brains and poseurs has gotten so mendacious as to leave us parched for adequate scorn:

And then there is the Fed. We repeat, they know not. All they do is react. They didn’t see the spike in everything coming but now they tell us not to worry. We find it comical to hear they may raise rates IN 2023! Yes…2023. Unfortunately, if inflation does heat up and more importantly stay up, these easy money dolts at the fed may be forced to act. That would be the worst of all worlds. We also found it comedic the fed takes no blame for the inflation even though economics 101 states too much money chasing too few goods could sow them seeds.
The fed has created a ton of wealth inequality by bubbling up all assets while screwing every saver. They are now making the cost of living quite unaffordable for quite the few while taking no blame for anything. They are a— backwards on everything. Since Bernanke started this experiment of gargantuan easy money, our debt has increased $18 trillion. A couple hundred years to get to $10 trillion of debt and just 13 years to add another $18 trillion. They have enabled record leverage, record amounts of derivatives, record amounts of speculation and record amounts of risk taking at the worst possible time. When the asset bubble goes boom (and it is getting closer), be ready. We are not kidding.

Just think about the bolded words above. The Federal funds rate has been negative in real terms for virtually the entirety of the last 159 months (since March 2008) and during May clocked in at a near record -2.55%. Yet these cats are gumming out loud about keeping it that way for at least another 30 months, well into the second half of 2023.

That’s damn near 15 straight years of free overnight money that is of no use to anyone, and we mean any productive person, except for carry trade speculators. And that’s why we have the meme stock insanity, absurd valuations for the FANGS and the rest of technology, outright financial frauds like Tesla and the hijacking of even good ideas like the cryptos.

No, a coin named PancakeSwap is not a store of value, a medium of exchange or a haven from inflation or an alternative to the impending demise of the fiats. It’s actually a flaming symptom of the latter.

Indeed, when the value of a digital token, which is absolutely good for nothing, goes from a market cap of $16 million on Halloween last fall to a peak of $6.8 billion on April 30, which value has since dropped to $2.9 billion, what you have is rank speculation of biblical proportion. Nothing rational rises by 425X in 180 days. What is worse, the mania has gotten so intense and all encompassing that the mainstream financial press treats this blatant farce with dead seriousness.

In response to the Fed’s dot plot release showing 13 out of 19 Fed heads are finally in favor of something other than 0.00% interest rates, albeit not until the second half of 2023, the Wall Street Journal offered the  headline reproduced below. It’s as if “penciling-in” a 0.6% interest rate 30 months from now actually amounted to something meaningfully “earlier” than what? Never?

It’s also as if the penciling metaphor implies it’s all tentative—that there is still the possibility of an erasure of the Fed’s latest “forward guidance”. That is to say, why not 200 months of negative real interest rates, if that’s what these geniuses conclude is needed to “support the economy”?

Someday historians will surely wonder if the Fed’s hideous “dot plot” was accidentally scribbled on a blackboard in the Eccles Building during bring your grandchildren to work day. The whole paint-by-the-dots rigamarole is really that juvenile.

After all, what serious adult thinks you can peer 36 months into the future of a global economy that is slamming and banging in a dizzying stagger and ascertain the correct interest rate to the second decimal point?

Scroll back 30 months to December 2018, for instance, and ask which clairvoyant Fed head could have remotely foreseen the events of the past year or anticipated that the most devastating government ordered shutdown of economic activity in American history would have fostered soaring stock market averages and the “Roaring Twenties are here again” narrative on Wall Street?

Likewise, consider these musings from the casino regular quoted below, who appears to believe that another taper tantrum after a decade and one-half of free gaming chips is both reasonable and a challenge that the Fed will find difficult to circumnavigate.

That’s right. The Wall Street casino has gotten so rotten with greed, entitlement and speculative fevers that the very distant possibility of an interest rate other than null is expected to trigger the equivalent of a financial insurrection:

“The key message is that we will not stay here forever,” said Florent Pochon, head of cross-asset strategies at Natixis. “The Fed really wanted to take the opportunity of the current window and the strong momentum to send the signal that it is ready to normalize, but it will be a difficult exercise if they want to avoid another taper tantrum.”

And than we had assurance from another “chief strategist” that the Fed’s purported hawkishness was necessary so that it might not fall behind the proverbial curve.

“It was certainly a hawkish surprise, but given what we have seen with the growth picture and higher inflation, it would have been a surprise if there hadn’t been a shift,” said Seema Shah, chief strategist at Principal Global Advisors. “There have been some concerns building that the Fed was going to fall behind the curve, and I think this suggests that they won’t.”

Goodness gracious me. They’ve been behind the curve for a decade. And if the above chart on the real Fed funds rate isn’t sufficiently dispositive, try this one, which reflects the inflation-adjusted yield on junk bonds.

As of the end of May it was below zero. That is to say, yields which have historically ranged between 500 and 1000 basis points after inflation because these securities are called “junk bonds” for good reason, are now  yielding an absurd -20 basis points.

And that’s the gravamen of the case. Interest rates are not the private joy stick that the 12 wanna be monetary central planners who comprise the FOMC have been granted to manage the nation’s $22 trillion GDP.

To the contrary, they are the essential signaling mechanism around which an honest and productive financial system is necessarily organized. When allowed to function properly and to reflect the tug and pull of market forces, they powerfully impact the allocation of capital and assessment of risk throughout the warp and woof of the entire capitalist economy.

Indeed, efficient and productive capital allocation is the very motor force of capitalist prosperity, but for all intents and purposes the clowns who inhabit the Eccles Building have falsified the financial signalling system entirely. Rather than sending scarce savings and capital to their highest and best uses, today’s Fed dictated rates are fueling the greatest speculative bacchanalia the world has ever seen. 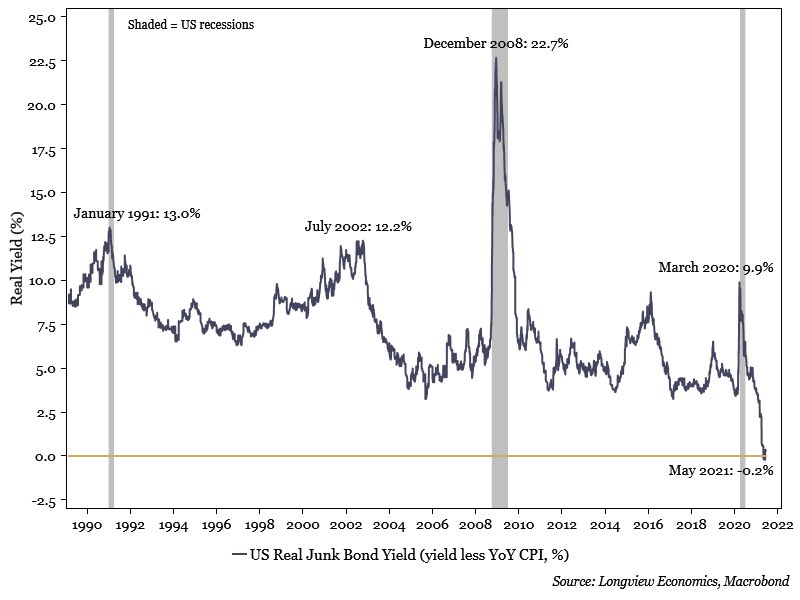 For want of doubt, consider the chart below, which measures the debt-to-EBITDA ratio for junk loans and bonds used to finance large scale LBOs (Leveraged Buyouts). At nearly 7X, it now exceeds the heated extreme of 2007, and is thereby creating corporate zombies at a furious pace.

Back in the day, we were in the LBO business and know whereof we speak. LBOs have no redeeming economic value and would occur rarely, if at all, on an honest free market. That’s because they simply mortgage any and all future cash flows to the benefit of selling asset owners and the private equity insiders who strip mine them for fees, recaps and capital gains extracted from the next sucker in the financial engineering conga line.

But when junk debt flows so abundantly and cheaply that leverage reaches 7X EBITDA before even a dime is spent on CapEx for replenishment and nourishment of a company’s asset base, it’s tantamount to a death sentence. That is, in its mindless and unending repression of honest interest rates the Fed is actually channeling capital to its lowest and most destructive use. 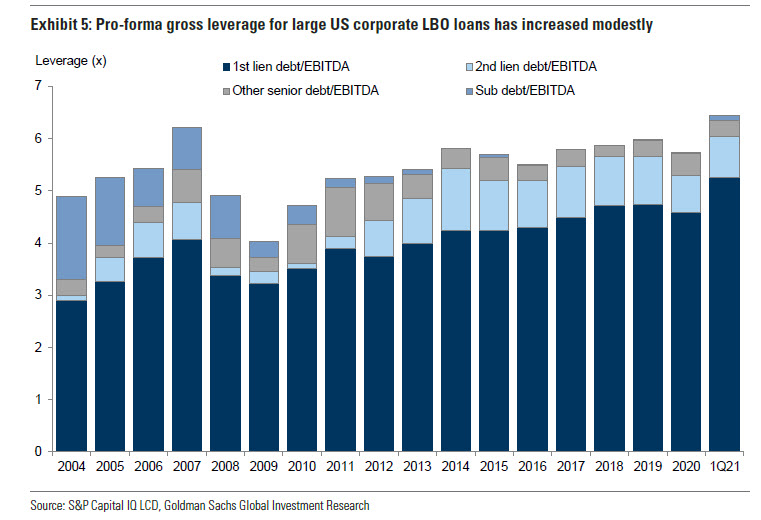 Needless to say, LBOs and leveraged recaps are just one of the myriad of channels by which the nation’s pool of savings and capital is being hijacked for the purpose of destructive speculation and the extraction of dead-weight economic rents by money-dealers.

For want of doubt here is the US industrial production index for the 14-years since the pre-crisis peak in late 2007. It measures the physical output of the entire US manufacturing, utility, mining and energy sector.

Yet the 99.26 index level just reported for May was actually still 2.5% below where it stood way back in November 2007.

That is, $7 trillion of Fed money-printing ago, and these fools plan on another 30 months of more of the same.

Dot Plot of the dummies, indeed!