But, hey, after a 10,000% gain in GME (GameStock) between early August and last Wednesday’s peak, shouldn’t the Robin Hooders in mom and pop’s basement have expected that even the sky has its limits? 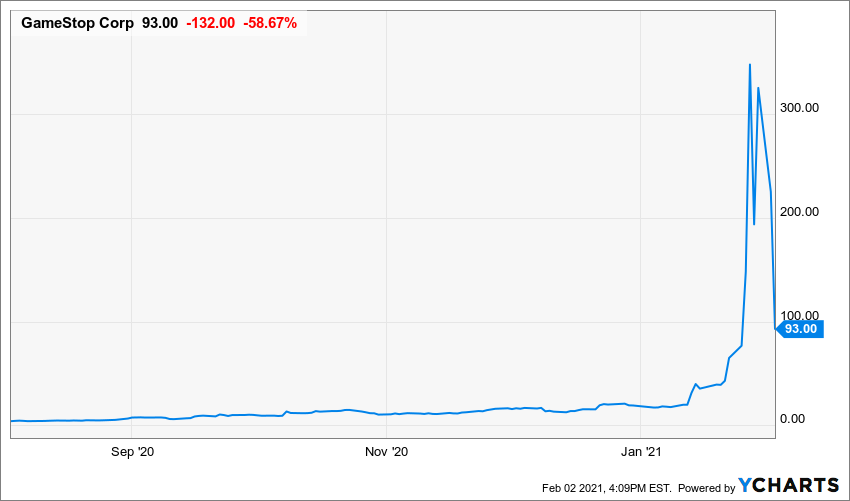 Well, apparently, by the lights of most everyone who doesn’t know anything, it’s “unacceptable”, intolerable and an affront to apple pie and motherhood itself for a 10,000% winner in the stock market lottery to be forced to walk away battered and bruised with only a 2,140% gain over the last six months.

And, yes, Robinhood and other on-line brokers servicing the Reddit short-squeeze trades did curtail buying for several days for the very excellent reason that they either ran out of capital to post at the stock clearinghouse called DTCC (Depository Trust & Clearing Corporation) or were reluctant to deploy what they had left of it in behalf of crazed clients who at the peak on Wednesday were paying $467 per share for a dying video games retailer that had already won the Blockbuster Award for obsolescence in plain sight.

But, alas, Robinhood never stopped any client from selling (which would reduce collateral requirements at DTCC) at any point along the roller coaster curve of the last seven days depicted above. One and all Robinhooders were free to get out without restriction or delay for gains of 1,000% and up during the entire period of this ridiculously mis-characterized David v. Goliath ordeal.

Nevertheless, last Thursday and Friday the airwaves were replete with tut-tutting from all points on the political compass. Rep. Alexandria Ocasio-Cortez (aka AOC) deemed GameStop trading restrictions “unacceptable” and demanded an investigation. Rep. Rashida Tlaib of the Financial Services Committee accused Robinhood of “stealing millions of dollars from their users.”

Then Sen. Ted Cruz mounted the Squad, or at least its bandwagon, in an ad hoc conflation of Left and Right, tweeting that he could “fully agree” with AOC:

From there it got even more hideous. The present era’s poster boy for financial scamming himself, Elon Musk, mounted his own high horse, stating that he “absolutely” agreed that Robinhood should be investigated, and called for short selling to be banned as a scam!

That’s right. The founder, major shareholder and CEO of the most over-valued company in world history, which deserves being shorted until the cows come home, did have the gall to call for a short-selling ban.

Still, Elon was not about to be outdone by a scamster who doesn’t even supply anything useful like nifty but vastly uneconomic electric cars. The clown who is the founder of Barstool Sports and also a frozen-pizza reviewer, Dave Portnoy, told Robinhood executives that:

“You deserve to be behind bars.”

No. We’d say, not at all. The entire contretemps had nothing to do with David v. Goliath, unfair market rigging, Robinhood’s chain being yanked by Citadel and the other big hedge funds who were directly or indirectly short GME (Citadel and Steve Cohen’s Point 72 were big investors in Melvin Capital, which was heavily short GME and suffered a massive capital draw-down from $12 billion to $5 billion last week) or any other untoward assault on the Robinhood traders.

Should any of them loose money, and most of them will, it is function of their own stupidity and greed; and the fact that they are making 1,000%+ profits on paper only because we are in the blow-off stages of the greatest financial bubble ever confected by a central bank. In the end, if anyone should end up behind bars it should be Ben Bernanke, Janet Yellen, Jay Powell and their heirs and assigns.

It is central bank money-pumping and so-called wealth effects policy that has destroyed honest price discovery on Wall Street, and which has progressively severed the link between earnings and market capitalization. But with the DME insanity, we now have a boundary case of just how unhinged the entire system has become.

To wit, no one in the right mind except a tech-based  High Frequency trading algorithm with an average 10-second hold, should have been buying DME since last August but especially after January 21 when its stock escaped economic gravity and soared above $20 per share.

For want of doubt, here is GME’s sales, net income and free cash flow path over the last decade:

In fact, during the 11 quarters since the end of 2018, GME has racked up cumulative losses of $1.44 billion, which losses wiped-out the company’s modest cummulative earnings going all the way back to 2011.

Nor has there been any sudden turn-around in GME’s business since the stock went parabolic last August. In fact, the Covid-Lockdown has only hammered this mall-based retailer even harder:

Indeed, the company’s best year for profits during the last decade was 2016, when it posted net income of $402 million.

So at the peak of the buying frenzy last Wednesday when DME’s market cap hit a preposterous $24.2 billion, Robinhooders were paying 60X five year’s ago net income, which has now disappeared forever into the maw of on-line gaming. 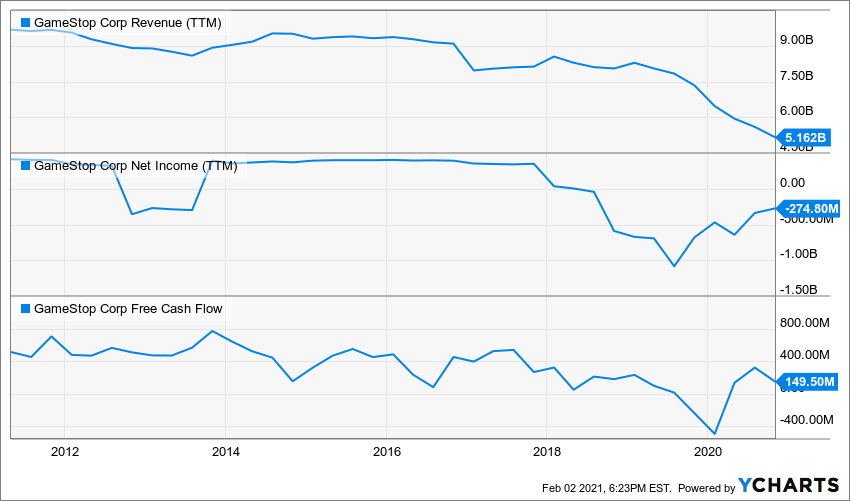 Needless to say, by curtailing buys to just a few shares on Friday and Monday, Robinhood was doing its clients a great favor, but not out of benevolence. In fact, Robinhood is just a small peg in today’s infernal machine of speculation that ultimately routes back to the the fools in the Eccles Building.

For one thing, Robinhood saw its client base soar from a few hundred thousand to more than 15 million over the last several years after it instituted free trades, but again not out of benevolence. To the contrary, its twenty-something founders discovered that they could make more money selling trading volume to the big high frequency traders and market makers like Citadel than they could charging the then going rate for retail trades among established brokers.

In turn, they buyers of Robinhood’s trading volume are not investors, either. They are just technologically enabled high speed gamblers who front run the trades of the slower-footed speculators on Wall Street and among the homegamers. But in an honest free market based on sound money, the Citadel’s of the world wouldn’t even exist because they make their profits consuming Fed-fueled liquidity, not generating it as they so unctuously claim.

Likewise, the homegamers who pay the freight wouldn’t exist in their tens of millions, either, because stock picking and investing capital for the long haul is properly the business of specialized investment professionals, not iPhone wielding day traders. The Robinhood claim that it has opened the market to the proverbial “little guy” and has “democratized” the stock market is just specious marketing palaver.

The very idea of democratizing the stock market is a serious retrogression from the law of specialization and expertise from whence true economic gains and prosperity arise. It’s akin to going back to barter by using the uninformed and untrained time of homegamers in lieu of money purchase of market tested investment expertise.

We will dig deeper into this proposition in Part 2, put suffice it here to say that the ultimate extension of the Robinhood business model is that 160 million workers would spend a good part of their day trading stocks with each other through the stock market’s opaque interior plumbing, where the big guys scim-off the vigorish, while actual economic production and wealth on main street would plummet.

In this context, the estimable Gary Kaltbaum minced no words in his take this AM:

Needless to say, the above catalogued carnage has just begun. The Robinhooders are about to learn that gang-banging over-shorted stocks of failing companies is not an investment strategy—-just a form of financial self-mutilation. As we will amplify in Part 2, every one of the above Robinhooder’s favorite hits listed by Gary Kaltbaum were being shorted for good reasons of failing performance or flawed or obsolete business models. 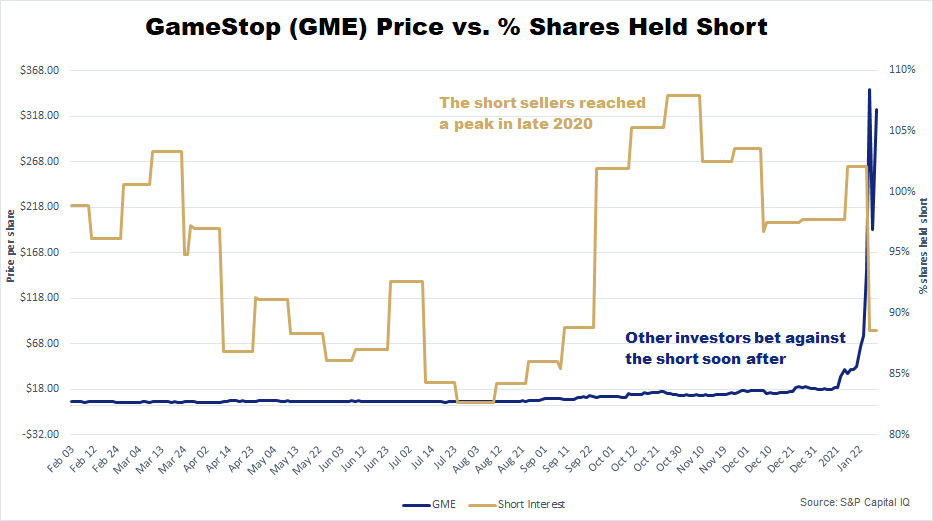 Moreover, there was no conspiracy of the big guys about it. Brokers are subject to strict financial requirements, including that they maintain large security deposits at the clearinghouses, which thanks to the so-called reforms of the Dodd-Frank act have become drastically more onerous when high sigma risk conditions like 100% daily swings in stock prices materialize in the final days of a bubble.

Pursuant to these new VAR (value at risk) based rules, brokers had to suddenly post massive collateral increases when the VAR formulas used by the DTCC clearing house went full retard. Thus, when GameStop dropped from $483 to $112 late last week, the clearinghouse DTCC raised requirements by an aggregate $7.5 billion. Brokers had to post that money to DTCC whether or not their clients had it.

As Robinhood CEO, Vlad Tenev, explained in a Sunday night in an interview, with respect to GME alone:

The request was around $3 billion, which is, you know, about an order of magnitude more than what it typically is.

Not entirely by coincidence, the recent stampede into the nearly worthless GameStop stock, which soon left Robinhood stranded high and dry with insufficient capital to meet its soaring deposit requirements, was triggered by a so-called “activist investor”, Ryan Cohen. The latter recently bought more than 10% of the retailer’s stock through his investment firm with an activist plan to transform GameStop into a “technology company” and away from brick-and-mortar retailing.

Cohen should know how to turn a dubious business model into billions of market cap. He is the founder of the on-line pet food company, Chewy, which is the on-line spawn of the infamous PetSmart of dotcom fame, and has never made a single dime of net income but is now valued at $42 billion in the Wall Street casino.

At least the homegamers had a Pied Piper who was worthy of the name. 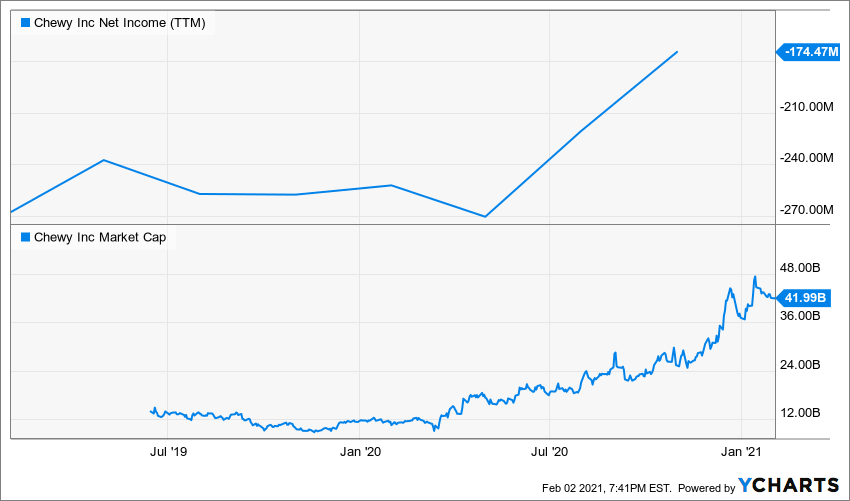