Well, that was easy!

Signing four Obamaesque executive orders in less than one minute on Saturday—at his own country club, no less—the Donald unilaterally spent $250 billion of money Uncle Sam most definitely does not have.

Who knew that Trump was elected national St. Nick and that the messiness of the legislative process could be so easily waived?

Then again, what’s the point of a constitutional requirement that money bills must originate in the House of Representatives if $44 billion of previously appropriated disaster relief funds for hurricanes, floods, fires and earthquakes can be re-purposed to a $400 per week unemployment dole payable to upwards of 30 million workers by the wave of the presidential pen?

Likewise, the Donald deferred more than $200 billion of employee payroll taxes to exactly one month beyond the election, thereby creating a fiscal cliff and political time-bomb come January 1 for himself or his successor, as the case my be. That is, every single dime of that phony tax cut—-which Kudlow quickly claimed to be about $1,200 per worker—will be owed and due in a lump sum during the first payroll period of 2021.

Of course, the Donald was quick to say, “elect me and I’ll promptly forgive the $1,200”, but the implications of that are truly mind-boggling.

On the one hand, the Donald has debatable powers to defer these payroll tax collections under existing emergency authority, but absolutely zero power to cancel the tax without Congressional legislation, which will absolutely not be forthcoming before January 1.

So he effectively put a gun to the head of Congress (and the constitution), setting up Christmas Eve legislation in the lame-duck session to roll the deferral forward until who knows when.

At the same time, the precedent is truly frightening. There is no doubt that the upcoming Kamala Harris administration  will create a lot more than one national disaster and White House declaration thereof before November 2024. So it is readily imaginable that her pre-election “tax holiday” will be a lot bigger than the Donald’s $200 billion of election period walking around money, and the resulting fiscal cliff/political time-bomb all the more explosive.

So, yes, we are fast becoming a Banana Republic fiscally, but by the lights of Wall Street that is apparently a good thing. After all, the unfolding fiscal collapse, which took another leap for the worse on Saturday is only going to get dramatically more unmanageable from here, yet the S&P 500 today was levitated to 99.26% of its all-time high.

Stated differently, thanks to the Fed’s massive monetization of the debt and egregious falsification of financial asset prices, the belief abounds on both end of the Acela Corridor that there is no end to the fiscal and monetary “stimulus” that can be applied to keep the main street economy trudging higher and the stock indices levitating skyward.

We beg to differ, and offer the chart below as just one window on how badly the nation’s economy has been mauled by the folly of Lockdown Nation and the rampant Covid-Hysteria among the sheeples that continues to dim the lights on normal economic and social function.

Needless to say, what was happening before the Covid came along was that the American economy was retiring from the high productivity, high wage business of goods-production in favor of low-productivity and generally low-wage services output—mostly especially in the the so-called Leisure and Hospitality sector of restaurants, bars, hotels, tourism, resorts, movies, sporting events and entertainment venues of mushrooming aspect.

The BLS index of hours worked in these respective sectors over the last 42 years leaves no doubt about what has happened over time–even if it has been totally drowned-out by the noise of the incoming data in the form of the weekly and monthly (and constantly revised) deltas on which Wall Street foolishly thrives.

To wit, at the pre-Covid peak in February 2020, the index of aggregate hours worked in the good-producing sectors (blue line), which includes manufacturing, construction, mining and energy, was still down by 16.4% from its September 1978 level, and actually clocked in 6.4% below its November 2007 pre-crisis peak.

That’s right. The longest business cycle expansion in history—-and the greatest, continuous application of fiscal and monetary “stimulus” ever imagined—-resulted in 11-years of grinding backwards. And, of course, that do make a difference since the average annual wage in the goods producing sector is about $62,000 per year compared to $22,000 annual equivalent in the mostly part-time, minimum wage oriented Leisure and Hospitality sector (black line).

By contrast, during February 2020, the index of aggregate hours worked in Leisure and Hospitality sector was up by 135% from September 1979 and 21% from the pre-crisis peak in November 2007.

Moreover, given that the average work week in Leisure and Hospitality is just 26 hours, the continuous gain in aggregate hours shown in the chart below made for a whole lot of “jobs “in the monthly BLS report, even if said mushrooming job counts generated only 35% of the income flowing from a good-producting job.

That was bad enough, but then Dr Fauci and the Virus Patrol struck with Blitzkrieg style destructive force. By April, aggregate hours in the goods producing sector were down 19% from February, and stood at the absolute lowest point in 71 years.

At the same time, the heavy boot heel of Lockdown Nation absolutely devastated the Leisure and Hospitality sector. The effect of economic marshal law imposed by the mayors and governors resulted in a 57.3% plunge in the aggregate hours index in April, meaning that every single hour gained over the long ascent depicted in the chart since September 1978 had been wiped out in just 60 days.

As we have been insisting, therefore, what monkey-hammered the economy after March 13 had nothing to do with a standard recession or a cascading business cycle contraction. This was sui generis—-a state-ordered economic heart attack. As a result, the index of hours worked during April posted as follows:

So for crying out loud, yes, there has been a tad of a bounce-back from the April pits of economic Hades, but the economic narrative has been so corrupted that the Donald actually had the audacity to claim “record” jobs growth during the last three months, and the Wall Street talking heads keep extrapolating a “V” recovery.

What Friday’s BLS report for July actually showed was that aggregate hours worked—-a reasonable proxy for output and the motor force of income and spending—were equal to levels first crossed as follows: To take another example, retail remains at the lowest level in the data series, which commenced in March 2006, and is nearly 10% below its pre-crisis level of November 2007.  And self-evidently, store traffic is not picking up despite the easing of lockdowns in many parts of the country. Nor did all of these lost retail hours migrate over to Amazon, as the running narrative would have it. After a 13.8% drop between the February 2020 pre-Covid peak and the April bottom, the index of aggregate hours worked in the warehousing and transportation sector was still down by 8.8% in July, meaning that it has recovered barely 35% of the lost ground.

Moreover, all of the high-frequency data shows activity levels in nearly all sections of the country and business sectors have flat-lined since the so-called second wave Covid outbreak in the Sunbelt during the last 75 days. Of course, that outbreak was a head fake all along, and already Covid-hospitalization levels in the US as a whole have returned to late May/early June levels. But the MSM drumbeat of Covid-Hysteria has not abated,  meaning economic marshal law remains heavily in place, while feared-based voluntary strikes by the consuming public remain intense. 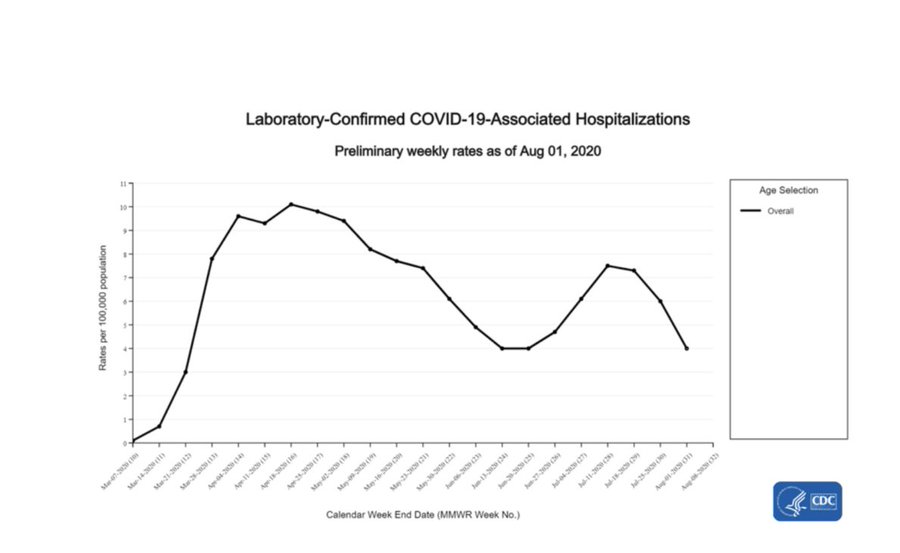 At the end of the day, the Donald’s deplorable bailout stunt on Saturday goes to the heart of the matter—-and not just the quarter trillion dollars that is being piled onto the already staggering public debt in excess of $26 trillion.

Owing to the Fed’s outrageous monetization of the public debt, American politics have degenerated into a fiscal free-for-all. The bipartisan duopoly is single-mindedly focused on holding harmless the incomes and cash flows of the household and business sectors alike—even if it means when all is said an done that upwards of $5 trillion of borrowed/monetized money will have been pumped into the US economy between March and Labor Day by a panicked Imperial City.

The fig leaf of rationalization, of course, is that the Covid is a once in 100-year flood and that Washington needs to pull out the stops, fiscally prudent or not.

The issue recurs, however. The Covid is a bad flu year, not an existential threat to the life and limb of the American population. As of August 1, here is the mortality data:

In short, rather than spend another quarter trillion dollars of borrowed money, the Donald’s real job on Saturday was to fire Fauci, declare the pandemic over and challenge Sleepy Joe to come out of his basement to debate the matter.

But there is not a corporal’s guard left in Washington willing to debunk the Great Covid-Hysteria and face the facts of a hemorrhaging national fisc—so the King of Debt chose to dress up as St. Nick. And then the fools on Wall Street rewarded him with another 350 points of bottled air on the Dow.

Did we say Banana Republic?