According to the CDC’s long established mortality models, 687,000 Americans were supposed to die during the 12 weeks between February 1 and April 18.

But only 666,000 actually complied. So the Grim Reaper was deprived of his seasonally adjusted mortality quota, even as 21,000 families were spared, at least temporarily, of the loss and grief which accompanies the passing of a loved one.

Either way, how in the hell does that square with Lockdown Nation—an unprecedented government ordered economic heart attack purportedly designed to prevent a Black Plague of illness and death?

To be sure, a better than garden variety recession was already due after a record 129-month long business expansion. But it was the sudden, virulent eruption of the Covid Death Hysteria in the halls of government that turned a scheduled business cycle contraction into a monumental catastrophe.

Indeed, the unfolding collapse now underway shouldn’t be called either a recession or a depression. These terms denote the macroeconomic contraction triggered by bursting credit or other financial bubbles and they usually take many months to reach full intensity.

But this one literally arrived at warp speed and with orders of magnitude greater contractionary force than normal business cycle downturns. It is therefore sui generis; it stemmed from panicked officialdom who ordered households and businesses alike to abruptly “cease and desist” from their daily economic activity upon penalty of fine, jail and public opprobrium.

The good folks at Moody’s Analytics captured the breathtaking speed of the resulting plunge in the chart below in which they tracked the number of U.S. counties falling under lockdown orders (blue bars) with an estimate of the cumulative loss in daily GDP (ascending red line).

Whether this is accurate to the percentage point is immaterial and will be adjudicated after several years of jobs and GDP data revisions. But what can’t be gainsaid is that in the short span between March 16 and April 6th depicted in the graphic—something like one-third of US GDP ceased to happen.

When in the modern day world of nearly unfathomably complex economic linkages, incredibly long supply chains and interactive feed-back loops you have one-third of economic activity go dark in just 21 days, the damage is likely to be enormous, even if the interruption is comparatively short-lived.

But in the present instance the US economy was so fragile and deeply impaired owing to 30-years of debt, speculation and malinvestment-fueled false prosperity that it resembled an economic hemophiliac stumbling into a knife fight. The bleeding will be profuse and long-lasting because the American body economic had no defenses.

We shall lay out chapter and verse on the cash flow vulnerability of the preponderant share of US households and businesses in subsequent installments. But sometimes a picture is truly worth a thousand words and this– cars lined-up at a San Diego food bank—is one of them.

Ordinary urban poor folk don’t line up at the soup kitchen in their late vintage autos and SUVs. This is the hand-to-mouth economy lined up for food in cars that will soon be nabbed by the repo man. 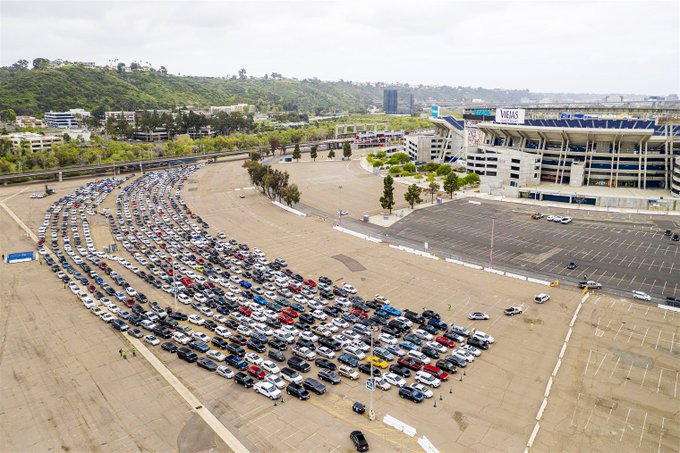 So the question recurs. Why did Lockdown Nation strike the everyday American economy out of the blue and who is responsible?

That is to say, Lockdown Nation itself is the product of a contagion of public policy Hysteria, so who is Patient Zero?

We think there is little doubt that it is the Donald himself, as we chronicle below. It is only his overweening, pugnacious, polarizing political persona that could have transformed a moderate public health  threat into a politicized death struggle that is literally suffocating the American economy and the social life which depends upon it.

But for want of doubt let us remind that there was never any case for Lockdown Nation—-not on March 16 when the Trump White House issued its stay-at-home guidelines nor subsequently—based on the pubic health impact of the corona virus.

That’s because Covid-19 would be considered a despicable bully if it were an animate being. It overwhelmingly brings serious illness and death upon the old, frail and already disease-ridden, not the general population.

Even many of the rare deaths among younger people appear to be attributable to an unusual genetic condition which causes the number one killer of the coronavirus—the human immune system—to launch an unhinged counterattack called a “cytokine storm” that ends up maiming or killing the patient, not the virus (fortunately, there are immune system suppressants that can treat these if caught early enough).

Thus, as of April 25 when the CDC had scored 40,072 “confirmed or presumed” Covid-19 deaths, the breakdown by age was unassailably dispositive:

So the average mortality rate for the entire US population as of April 25, which was 12.2 deaths per 100,000, is completely meaningless from the perspective of remedial public health policy. It is a reminder of the old adage that you can drown in a river with an average depth of 3 feet if you end up in a deep, vicious eddy pool.

Likewise, you don’t rationally shutdown schools when the mortality rate for kids is a rounding error; and keeping the kids out of school does nothing for their grandparents and great-grandparents if they are self-isolated anyway, as the should be, when their mortality risk is 22,800X higher!

Indeed, among the cohorts of the working age population age 35-64, there is absolutely no basis in the mortality rates for shutting down places of work. The normal, total mortality rate for this 126 million-strong core of the work force, in fact, is nearly 500 per 100,000 annually.

So the Covid death count to date amounts to just 1.3% of the normal mortality rate.  What posse of fools advised the Donald, therefore, to monkey-hammer the working economy on account of that?

Moreover, our eddy pool analogy could not be more spot on. A new analysis of elderly New York hospital patients who died WITH Covid-19 showed that 94% suffered from at least one life-threatening morbidity such as hypertension or respiratory illnesses, and 88% had at least two.

But when you overlay, the comorbidity incidence among those 16%, the real highly vulnerable population turns out to be 5% or less.

So the fact that we got to Lockdown Nation with lightening speed given these facts is surely a case of President Truman’s famous sign on his Oval Office desk that read, “the buck stops here”.

The truth is, the Donald is lazy, weak, indecisive, notoriously ill-informed and an atrocious chooser of advisors, and it is exactly those attributes that lead to the March 16 stay-at-home guidelines from the Oval Office.

Had the Donald not foolishly embraced the misbegotten project of the Infectious Disease Lobby to stop the spread of the coronavirus through the US population cold, which is self-evidently impossible with a ultra-contagious airborne virus, the Dem mayors and governors would not have had the political hall pass to instantly pile on the lockdown wagon.

Ironically, the Dems were desperately searching for a way to discredit the Donald’s phony Greatest Economy Ever boast, and the Donald handed them what amounts to an economic bunker buster bomb on a platter.

Indeed, choosing bad advisors and listening to them is the Donald signature failing. After all, if the gravamen of your foreign policy is America First and you appoint as your top national security advisor the most unhinged apostle of Empire First on the entire planet, John Bolton, you are either stupid as hell or semi-comatose.

So the Donald is, in fact, the Patient Zero who spread the virus of Lockdown Nation because he was either too lazy or too dumb ask the obvious question, as we will amplify in Part 2.

But in the meanwhile, WSJ columnist Holman Jenkins got it right:

We started off sensibly. “This is not something [American families] generally need to worry about,” said CDC’s Dr. Nancy Messonnier in mid-January. “It’s a very, very low risk to the United States,” said Dr. Anthony Fauci a week later.

Bill de Blasio, mayor of New York, urged residents to go about their business normally as recently as March 11.

But then on March 16, the Donald entered the White House briefing room and announced an sweeping plan to slow the spread of the coronavirus.

And it was based on the extremely bad advice of Dr. Fauci and the Scarf Lady (Deborah Birx), both lifetime government bureaucrats who had absolutely no concept of the economic Mayhem that Lockdown Nation would instantly foster.

So Patient Zero thereafter droned on night after night during this reality TV show in the stupid belief that the US economy was so strong that it could handle a 15-day Spring Vacation.

Never was a US President more misguided:

Stay home for 15 days, he told Americans. Avoid groups of more than 10 people. “If everyone makes this change, or these critical changes, and sacrifices now, we will rally together as one nation and we will defeat the virus,” he said.

On Sunday, the night before Day 15, Trump told the country to stick with the plan for another month, until April 30.

Indeed, the Donald got so bamboozled in part because of his own massively exaggerated view of his role. He came to view the absolutely catastrophic stay-at-home guidelines as merely another case of closing things down which aren’t his to close–like the border with Mexico.

Trump described the decision to issue the guidelines as “one of the most difficult decisions I’ve ever made” and said he was skeptical when his medical experts came to him with the plan.

“I wasn’t happy about it,” he said on Fox News last week. “They came in — experts — and they said, ‘We are going to have to close the country.‘ I said, ‘We have never closed the country before. This has never happened before.’ I said, ‘Are you serious about this?’

But without hardly a further moment of reflection, he promptly declared himself a War President, and we were off the races to Lockdown Nation.

But on this matter, the great Randolph Bourne was more than clairvoyant fully one century ago:

The moment war is declared, however, the mass of the people, through some spiritual alchemy, become convinced that they have willed and executed the deed themselves.

They then, with the exception of a few malcontents, proceed to allow themselves to be regimented, coerced, deranged in all the environments of their lives, and turned into a solid manufactory of destruction toward whatever other people may have, in the appointed scheme of things, come within the range of the Government’s disapprobation.

The citizen throws off his contempt and indifference to Government, identifies himself with its purposes, revives all his military memories and symbols, and the State once more walks, an august presence, through the imaginations of men.