As we noted in Part 1, without America’s 11th hour mobilization, the Great War would have ended in a stalemate of exhausted, bankrupted, demoralized  European combatants in 1917. There would have been no abomination known as the Versailles peace treaty because it was a toxic peace of victors. But without America’s tens of billions of aid and munitions and two million fresh American troops (doughboys) there would have been no Allied victors, as we demonstrate below.

Without Versailles, in turn, there would have been no “stab in the back” legends owing to the Weimar government’s forced signing of the “war guilt” clause; no continuance of England’s brutal post-armistice blockade that delivered hundreds of thousands of Germany’s women and children into starvation and death in the winter and spring of 1918-1919; and no demobilized 3-million man German army left humiliated, destitute, bitter and on a permanent political rampage of vengeance.

So, too, there would have been no acquiescence in the dismemberment of Germany at the Versailles “peace” table.

As it happened nearly one-fifth of Germany’s pre-war territory and population was spread in parts and pieces to Poland (the Danzig Corridor and Upper Silesia), Czechoslovakia (the Sudetenland), Denmark (Schleswig), France (the Saar, Alsace-Lorraine and the neutralized Rhineland) and Belgium (Eupen and Malmedy). 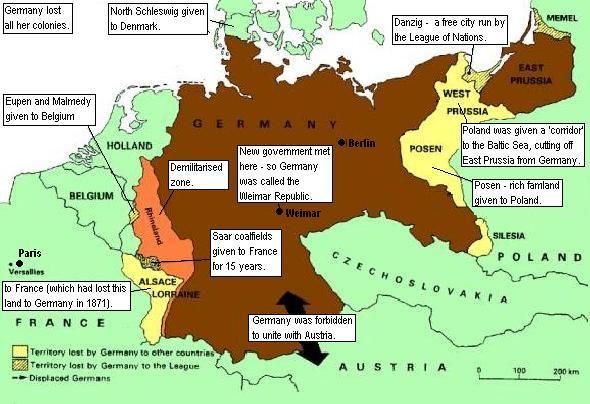 This sweeping loss of territory also meant Germany lost 50% of its iron production capacity, 16% of it coal output and 100% of its far flung colonies in Africa and East Asia to England and France.