Economic opportunity and prosperity are being systematically euthanized by the central banking agents of the state. And that constitutes an attack on all citizens, but most especially the economically vulnerable and those marginalized by already failing urban economies.

Moreover, that baleful state of affairs is not owing to some kind of postulated disease of the mind and spirit as the wokesters claim about “racism”. After all, the latter must perforce embrace the notion that racism is an inherent affliction of the broad public—given that state-enforced or even state-tolerated discrimination was self-evidently dismantled decades ago.

No, the real attack on America’s working class and striving urban poor is being done in broad daylight as much as was the state-enforced perversions of Jim Crow. The evidence lies in the Fed’s own statements and speeches.

In so many words, they say they are making the rich richer, and the everyday economy weaker, less prosperous and parched of opportunity for upward mobility owing to the eruption of debt, speculation and malinvestment which their misbegotten policies have fostered.

So forget all of the Fed’s unctuous, invented language about “supporting” the economy, “easing” financial conditions and “stimulating” growth and jobs. And especially pay no never mind whatsoever to their fancy econometric exercises in garbage-in/garbage-out forecasting, based on what is otherwise known as DSGE (dynamic stochastic general equilibrium) models.

What the Fed is actually about is blindingly simple.They are in the monomaniacal business of clubbing any and all interest rates to death like seal pup hunters in the Canadian north.

But the effect of such economic brutalism is to systematically supplant equity with debt in the business and household sectors—a process which inherently weakens main street investment, growth, jobs and incomes, even as it channels financial wealth to the 1% and 10%, who own 53% and 88% of the stock, respectively.

In a word, Keynesian central banking as now practiced in the Eccles Building and among its counterparts around the world is among the most destructive, unjust and perverse undertakings of the modern state ever.

Yet in America neither political party has the slightest clue that an unelected monetary politburo is making a mockery of everything for which they purportedly stand—even as these financial hegemons chronically and deliberately hammer GOP and Dem constituencies alike with malign punishments and reverse Robin Hood economics.

We will take the Washington duopoly further to task on another occasion, but first recall the basic economics of Keynesian central banking. Clubbing interest rates to the flat line in a $21 trillion GDP freighted down with $78 trillion of public and private debts does absolutely nothing for main street or the real economy. That’s because Peak Debt and rampant speculation have essentially clogged the traditional credit channel of monetary policy transmission to main street.

Instead, the Fed cheap credit never really leaves the canyons of Wall Street, where it fulsomely rewards carry-traders and risk asset speculators because zero cost money is always and everywhere the mothers milk of leveraged speculation. And it also causes corporate C-suites to become maniacally obsessed with goosing their stock options via financial engineering maneuvers, which supplant equity and financial resilience with debt and financial fragility.

So when business bankruptcies soar to unprecedented levels in the month ahead as the economy reels from the folly of Lockdown Nation, the financial fragility part will become crystal clear. But it also needs be recalled that even as the interest rate clubbers at the Fed fostered a massive explosion of business debt after the 2008 financial crisis, it did not translate into any growth in productive investment at all.

In other words, Wall Street ballyhoo about “strong” business investment to the contrary, the US economy was essentially eating its own tail as it consumed existing business assets in annual production at a faster pace than it replaced them with new investments.

Accordingly, even after the Fed’s tsunami of cheap credit, the nation’s net stock of productive assets actually shrank in real terms. And in a fiercely competitive global economy, a shrinkage of new investment in productive assets means diminishing productivity and a diminution of jobs, incomes and economic opportunities. Of course, it was not for want of trying. On the eve of the Great Recession total business debt (corporate and non-corporate) stood at $10.1 trillion, and has subsequently soared to $16.8 trillion. That $6.7 trillion gain represents fully 98% of the $6.85 trillion increase in nominal GDP during the same period.

That means that business debt over the past 13 year span has grown by 66.5%—far more than the 46.7% expansion of nominal GDP. Accordingly, the business debt burden on GDP has now gone off the charts, and is more than double it pre-1970 level

Business Debt As Percent of GDP:

Stated differently, chronic financial repression and clubbing of interest rates by the central bank has amounted to a slow motion burial of the business sector in debt—-debt that in recent decades has been overwhelmingly allocated to shrinking the equity base of businesses enterprise, thereby cycling wealth from the productive economy to the rent capturing precincts of Wall Street.

Indeed, given the stagnation of real net investment, there is no doubt as to where this $6.7 trillion of incremental business debt ended up. To wit, in the brokerage accounts of speculators and risk asset holders. Of course, that was exactly the Fed’s intention–even if it was disguised in the hoary “wealth effects” theory, or the misbegotten notion that if the rich feel wealthier, they will spend more, which, in turn, will “trickle down” to the main street hoi polloi.

Back in the day, we were accused of being a front man for Ronald Reagan’s trickle down economics. But at least in a world of reasonably sound money (under the Volcker standard) the idea of slashing tax rates for the wealthy had a fighting chance of unleashing entrepreneurial energies and new investments and risk-taking, thereby redounding to greater wealth and prosperity for all.

As the great Jack Kemp put it, the reasonable aim of Reaganomics was that a rising tide would indeed lift all boats.

By contrast, egregious central bank money printing sinks the boat of general prosperity, even as it showers incumbent financial asset holders with false and indecent inflation of existing securities. It is worse than a zero-sum game because falsified financial asset prices cannot possibly generate real, sustainable wealth, while they systematically and perversely redistribute wealth from the bottom to the top.

It is not an accident, therefore, that the steady plunge in the share of national wealth held by the bottom 90%, who own very little stock, began after Greenspan launched bubble finance in the late 1980s, not when the Gipper finally eliminated the punitive marginal tax rates that were left over from WWII in the 1981 and 1986 tax bills.

Yet do our Keynesian central bankers have an alternative explanation for the chart below that has unfolded on their watch?

Instead, they simply pound the table with a blatant lie, as did JayPo recently when he lamely insisted that “Fed policies absolutely do not add to inequality”.

The fact is, however, one of the greatest engines of wealth mal-distribution nurtured by the Fed is the $3 trillion junk debt market and the massive levels of financial engineering and business de-equitization which it finances.

Contrary to Wall Street propaganda, these financial engineering maneuvers are the bastard step-children of ultra-cheap debt and falsified financial asset prices. That’s why it is not at all surprising that in the midst of the most brutal economic collapse ever recorded, the junk debt market is soaring.

As Bloomberg noted this AM,

Companies rushing to shore up cash during the Covid-19 pandemic are fueling the busiest June ever in the U.S. junk-bond market.

Through Friday, companies have raised about $45.5 billion this month. That puts it on pace to be the busiest month since $46.4 billion was sold in September 2013, the former record since 2006, according to data compiled by Bloomberg.

The Federal Reserve’s promise to buy a limited number of junk bonds to support market liquidity has led to a buying frenzy as investors interpreted their action to mean the asset class is safer than usual.

And in the event it wasn’t clear, a grateful asset manager pinned the tail on the very donkey where it belongs:

“In just three months, the high-yield market has evolved from a truly broken state, to opening for secured rescue financing packages, to allowing companies to refinance debt at opportunistic and unprecedented rates, aided by our helicopter parents at the Federal Reserve,” said Christian Hoffmann, a portfolio manager at Thornburg Investment Management in Santa Fe, New Mexico.

He got that right. 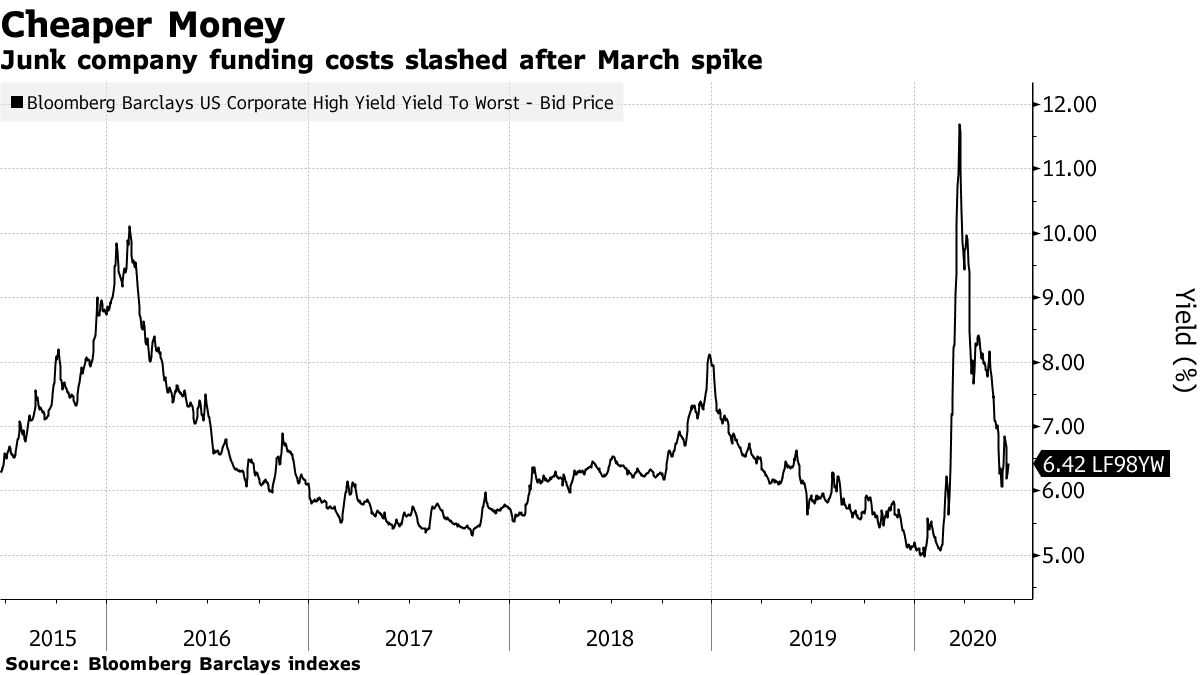