The chart monkeys were screeching noisily today as they finally scampered above the 200-DMA by a hair to close at 2744 on the S&P 500. 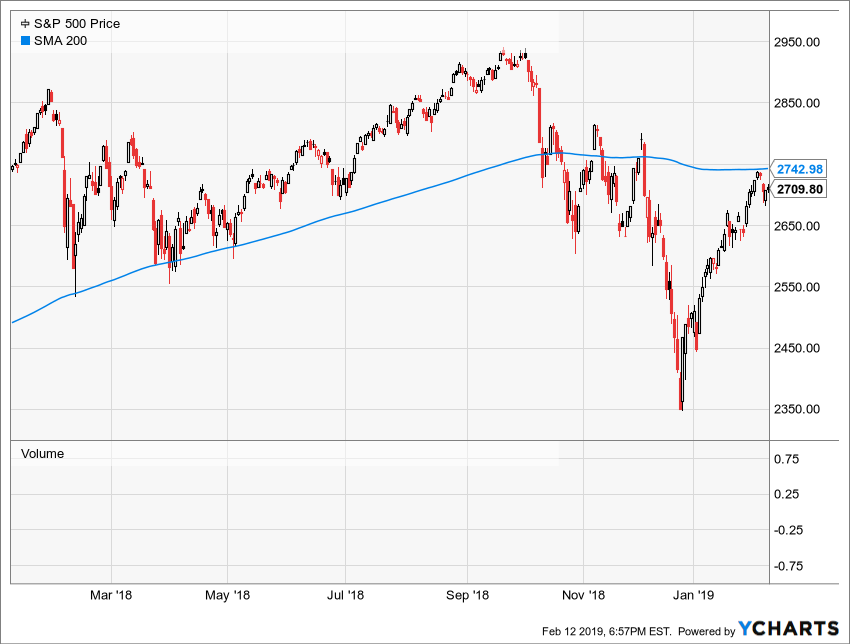 But the ludicrous part of this pathetic. algo-driven sideshow is that the talking heads could not think of a single reason for the 372 Dow point gain.

Well, except last night’s agreement among congressional leaders to keep the government open, which the Donald has not yet accepted; and also the rising prospect that the Donald’s punishing 10% tariff on American consumers who buy Chinese goods might not automatically escalate to 25% come March 1, as currently programmed.

What we actually have, of course, is a wheezing, debt-ridden, speculation-saturated 116 month-old business cycle that has “knock me over” written all over its forehead; and plenty of recession-inducing headwinds coming from all points on the compass at home and abroad that could readily do just that.

Thus, despite Powell’s Pitiful Pirouette rhetorically, the Fed still is liquidating its balance sheet at a $600 billion annual rate; the Federal debt continues to soar, crossing the $22 trillion mark yesterday; Europe is on the cusp of recession with both Germany and Italy heading toward negative GDP prints while France is in the throes of dire political breakdown; and the Red Ponzi totters ever more precariously as signaled by abrupt slowdowns among its principal suppliers—Japan and South Korea.

Yet the stock market is so broken and in servitude to the momo-traders and chart monkeys that its daylight hours talking heads found no embarrassment at all citing the aforementioned reasons for today’s rip, which was actually ignited in the wee hours last night by a few head-line scanning robo-traders in the futures market.

Still, it’s pretty remarkable. In the face of all the headwinds mentioned above and the literal collapse of the earnings outlook for Q1—-which stood at +6.7% last September, +3.3% at year-end and is now (1.7%) and falling by the day—-we are asked to believe that the market took comfort in the fact that America’s politicians may have managed to keep the lights on in the Washington Monument; and that the Donald’s Trade War on America’s consumers is heading for some kind of endless can-kicking exercise—just like nearly everything else in Washington.

Call it surreal, but that’s exactly where Keynesian central banking has brought us. And there is no more fitting reminder of that then the bubblevision crawlers this AM reminding one and all that today was the 20th anniversary of Japan’s pioneering adoption of zero interest rates (ZIRP).

Of course, if the truth be known it wasn’t the brilliant Japanese financial leadership, which had already buried the country in public and private debt by the end of the 1990’s, that actually invented ZIRP; and did so in defiance of every cannon of sound money and financial discipline that had been learned by mankind virtually since the invention of money.

No, Japan’s source of the courage to print was none other than Ben Bernanke, who was doing a warm-up consulting stint with the Bank of Japan, apparently in preparation for his appointment to the Federal Reserve in 2002 by the purported economic conservatives and sound money denizens of the George W. Bush White House.

Needless to say, print the Japanese did but the stunning extent of it is never made fully clear by the fleeting headlines and factoids which pass for financial news.

But here it is:During the 20-years of ZIRP being noted today, Japan’s nominal GDP in yen has risen by merely 5.0% versus a 602% increase in the balance sheet of the BOJ.

As they say on late night TV, you really can’t make this stuff up. You couldn’t find 1 in 10,000 Wall Street punters who know that the third largest economy on the planet has only crept forward for two decades at just o.25% per year as measured by its home currency, and that the footings of its central bank have soared 125X faster.

That’s undoubtedly because these figures scream out: Caution, Madmen At Work!

After all, Japan’s central bank policy is only a slightly advanced case of what the Fed, ECB and most of the other central banks of the world have been doing. To wit, massively purchasing real claims on labor,  capital and material embodied in government debt by means of an unrelenting and monumental emission of printing press credit.

By its own terms, in fact, the chart below is a dramatic remainder that Keynesian central banking has devolved into an absurd, gargantuan financial fraud. And yet as we saw in Part 1, the nattering nabobs of Fed land are already talking about how to achieve NIRP (negative interest rate policy) in the US via the extension-ladder of quasi-permanent QE. Moreover, as they also say on late night TV, there’s more. This massive bond-buying spree was being done in the name of stimulating inflation and enhancing real GDP growth, but there was no cigar on that one.

In fact,  Japan’s real GDP (red line) has grown at only 0.87% per annum during the last 20-years and the CPI has rising by a tiny 0.1% per annum averaged over the period.

At the same time, those solid rates of economic expansion did not depend on running the printing presses at the BOJ red hot. Its total assets averaged just 4.0% of GDP during the 1960-1990 era, slowly accelerated during the 199os and then shot the moon thereafter.

Today, the BOJ’s footing are approaching 70% of GDP. So 20 years of Bernanke’s ZIRP did nothing for Japan’s main street economy; and, in fact, either caused or was associated with an 85% plunge in its trend rate of real GDP growth.

But what it did enable was Japan’s runaway public debt. Between 1980 and 2016, the BOJ’s balance sheet grew from 4% to 66% of GDP, meaning that it monetized massive amounts of Japan’s government debt—along with corporate bonds, real estate and a good chunk of outstanding ETFs.

That had the effect, of course, of driving even medium and long-term interest rates to zero and below, where they still dwell today. But in the interim, Japan’s public debt to GDP ratio exploded, rising from 49% of GDP in 1980 to a staggering, world-leading 235% of GDP today.

In short, having adopted ZIRP 20 years ago, Japan has proceeded to bury itself in debt. And when you add business, household and financial debt to the huge figure for the public sector, Japan’s total leverage burden approaches 500% of national income.

It is now wonder that its real growth rate has been pushed to below 1.0% per annum and that it periodically teeters on the verge of recession. But as to the great evil the Keynesian central banking disease has inflicted upon Japan, your editor has a rather poignant personal recollection.

When we were launching the Reagan Supply side revolution back in early 1981 and were visited by a visiting delegation of Japan’s financial officials including its minister of finance, we were rather sternly admonished—-at least by standards of Japanese diplomatic etiquette—-about the fiscal risks and even dangers of the giant Reagan tax cut and potential ballooning deficits!

At that point in history, Japanese officialdom still adhered to fiscal orthodoxy and had built the Japanese economic miracle over the prior 25 years with only a modicum of public debt. So they knew whereof they spoke.

But then came professor Bernanke touting the elixir of NIRP and printing press money.

The rest is the unfortunate history that has trapped Japan in an impossible debt dead-end; and that has subsequently infected the entire world with the baleful doctrines and financial fraud of Keynesian central banking. Indeed, even as the Fed has finally resolved to shrink its balance sheet after 30 years of egregious expansion, the other major central banks of the world are just now beginning to slow down, as shown below.

Yet, the pivot to QT cannot be avoided without trashing the entire financial system of the world economy. So now comes the morning after—-the painful years of reckoning that Bernanke didn’t tell the Japanese about—or anyone else.